AHOL (Albert Heijn Holding) the largest supermarket chain in The Netherlands, with 30% of the market, began with Albert Heijn BV in 1887. In the 1920s the company ran a continuous advertising campaign with its posters of a young boy known as “Boffie” in an apron carrying a very large tray of cups of coffee and tempting various groups of people to come and have a cup of coffee. The caption for these posters was “Stop! Daar is Boffie… met Albert Heijn’s Koffie”. These posters became very familiar to the public and served their purpose well. You can still buy reproductions of them in The Netherlands today. 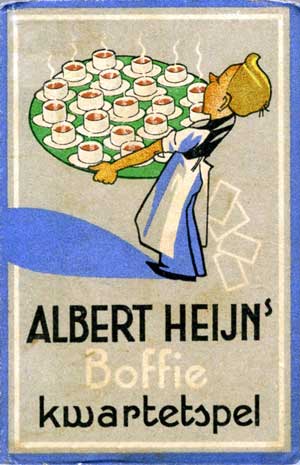 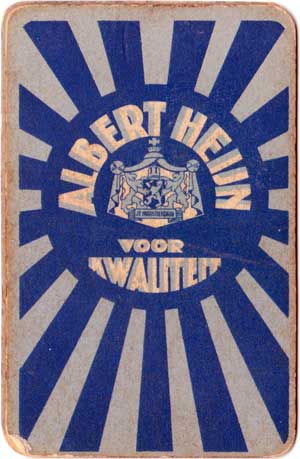 Above: The box is grey with blue edges. On the front is an image of a boy with a tray full of coffee cups with the title below in black and white letters. The card backs have a blue coloured sun motif with the words “Albert Heijn for quality”. All images courtesy Rex Pitts.

Above: Albert Heijn’s “Boffie” Kwartetspel with advertising for various products, first published in 1936. The card backs have a blue coloured sun motif with the words “Albert Heijn for quality”. Images courtesy Rex Pitts.