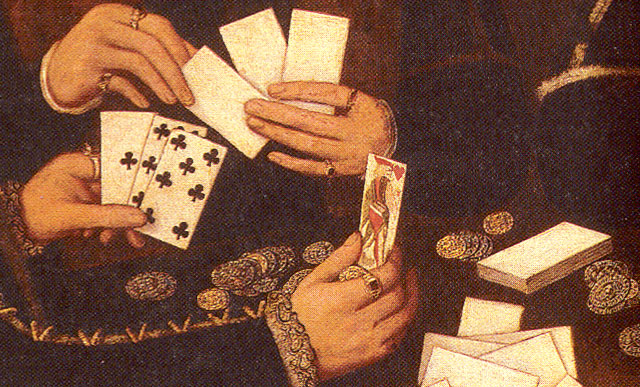 Right: Detail from painting of Elizabethan Card Players, illustrated in "What Life Was Like in the Realm of Elizabeth: England AD 1533-1603", Time-Life Books, Alexandria, Virginia, 1998, pp. 40-41

T HE HISTORY OF ENGLISH PLAYING CARDS dates probably from the mid 15th century, the

Cards made in Rouen at that time were an eclectic mixture of features from cards made for various foreign markets, hence the origins of what became the "English" pattern are not one precise source, but a mixture of several earlier regional patterns.

It seems reasonable to suppose that they resembled the earliest designs which we know to have come from France (see illustrations right), which have subsequently evolved into the English pack. Designs by Valery Faucil of Rouen (c.1500), by Jehan Henault of Antwerp (1543) or by Pierre Marechal of Rouen, made some 20 years later, are known.  Other early cards exist in museums and libraries.

These designs probably originated in the city of Rouen, where cards were made and exported to many parts of Europe.  French suit marks were employed, but when the English came to name the suits we find Spanish or Italian influences which leave us no clearer on the matter… the nomenclature is highlighted by the popularity in the past of such imported games as Ombre and Primero.

By their nature and use, cards are flimsy and perishable.  If players do not wear them out, then mice will eat them.  It is hardly surprising that the total number of English cards surviving before 1590 cannot exceed a dozen or so.

In 1590 an educational pack of cards was made by William Bowes illustrating county maps of England and Wales.  Cards from about 1630 were found in the walls of Trinity College Cambridge, early in the 20th century.

In the mid-17th century the Puritan regime was doubtless responsible for the destruction of thousands of packs, gambling being regarded by half the country as frivolous and immoral, although the manufacture of cards was permitted.  Thousands of packs must also have been destroyed during the great plague of London (1664-1666) and in the Great Fire of London (September 1666). It is not until the restoration of Charles II that we find any sort of order and continuity in the history of the publication of playing cards, or, indeed, surviving examples of full packs.

It is therefore with this period that collectors begin to feel involved, although 17th century cards are very rare. The standard cards of the period, that is to say those traditionally used in play, are almost the most elusive of all, probably having been used to the point of disintegration and then thrown away.  But by this time card makers had discovered new markets and uses for cards presented in novel form and issued many pictorial packs with the purpose of entertainment, education or propaganda of one kind or another.  (Illustration to right: Heraldry card from Arms of the English Peers pack, 1686 / Card from 17th century English Proverbs pack.)

During the early 17th century a group of manufacturers banded together in London and with the King's support formed the Worshipful Company of Makers of Playing Cards in 1628.  The King was desperate to raise money to continue fighting his wars and so, in exchange for tax revenues, he granted charters of incorporation to a number of trade guilds. Sums of money were paid for each concession and dues were yielded upon each year's trading.

The intention was to prevent the entry of foreign cards and to control and supervise manufacture within the London area.  The Worshipful Company collected the tax on each pack sold and this was paid to the King. The revenue collected equated to the amount lost from the banning of imported cards, and at the same time the cards were no more expensive than they had been during the previous years.

After 1712 each pack had to be stamped or marked with the maker's name. As a result the appointed Commissioner for Stamp Duties chose the Ace of Spades to receive the mark and it remains so to the present day, although the actual duty was abolished in August 1960 as it had become uneconomical.

Before 1880 playing cards had no numbers in the corners.  This had always created a problem when trying to fan out the cards.  Also, the court cards were single-ended, full figures, so an opponent might notice the presence of a royalty in hand if it was to be placed right-way-up.

Until Victorian times in England the backs of playing cards were plain, but eventually designs had to be printed on the reverse to avoid card sharps with a keen eye from recognising a card from the soiling or dirt marks on the back.  Wear and tear during play resulted in the square corners becoming scuffed and rounded, and so round corners became standard.

Finally, the 53rd card in the pack was introduced at the end of the 19th century by the Mississippi gamblers on the river boats in America, and the pack evolved into the pack of cards that we take for granted today.

Cards of the past all belong to and evoke their period, whether it be a matter of style, fashion or customs.  They belong to a cheerful, gregarious, competitive world, and provide the collector, by their associations,  with an unusually vivid view of history, nonetheless interesting for being from the sidelines.

THERE IS A MAGIC IN GAMES… from those created in the imagination, such as hide and seek, to those using pieces of paper, sticks or sophisticated manufactured items. Some games recreate the thrill of sporting activities, whilst others give a sense of creativity. A few can even cause anger and frustration.

Children's card games have been somewhat neglected in the past.  They are distinct from ordinary playing cards, with their most obvious difference being the lack of any court cards or suit marks. Instead game cards are either numbered, lettered or grouped in some other way.

Cards specifically designed for the amusement and education of children did not appear until the second half of the 18th century. Those produced at this time tended to have pictorial themes rather than the numerical format we are familiar with today.

A huge variety of games has been devised over the years, the best known of which are Happy Families or Quartet games which involve completing sets of cards and declaring these to win the game. However, cards have also been used to tell fairy tales, ask and answer questions, illustrate nature, animals, places, to teach foreign languages, to foster early learning with numbers, spelling, currency, telling the time, and so on.