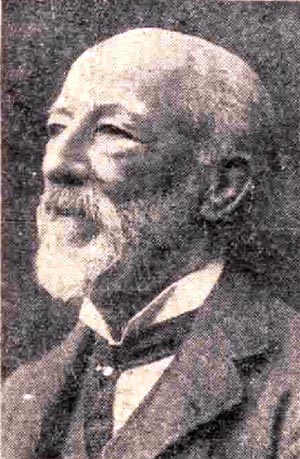 Heber Mardon was a former head of the well-known firm of Mardon, Son & Hall. He was born on the 28th April, 1840 and was the son of Mr James Mardon who, in 1846, moved to Bristol to join his cousin, Mr John Harris, in the printing trade at 39 Broad Street. Heber and his brother John were trained in the business, which developed considerably in the course of years, absorbing others and ever requiring larger premises.

In 1860 Mr Heber Mardon founded, with his father, the firm of Mardon and Son, with works at 10 & 11 St. Stephen Street. In the same year he married a daughter of Mr Joseph Hall, of Clifton, whose son George became a partner in the printing business in 1863, the name then becoming Mardon, Son & Hall. The firm became known far and wide for cardboard box making and artistic colour printing, including cigarette picture cards.

In 1867 the business moved to Milk Street. Mr James Mardon died in 1896, having retired many years earlier, leaving Mr Heber Mardon sole proprietor. The extensive factories at Temple Gate were erected in the 1880s and in 1897 a limited company was formed with Mr Heber Mardon as chairman. The firm catered largely for Messrs W.D. and H.O. Wills and other leading tobacco manufacturers, and became associated with the Imperial Tobacco Company on its formation.

Heber Mardon retired to Teignmouth in around 1914, where he made an impact in the local community. The land now belonging to the Teignmouth Golf Club had been generously given to the club by Heber Mardon in the 1920s. He also made a superb gift of engraving plates to the Bristol Museum and gave his collection of Napoleonic artefacts to Exeter Museum. Carlos Loiseau, better known as ‘Caloi’, was a cartoonist whose designs for Parliament Cigarettes were first published in the early 1970s. Wills’s “Happy Families” cards were issued by the Imperial Tobacco Company (of Great Britain and Ireland) Limited in around 1930. Tobacco insert cards were a very successful marketing innovation which started in the nineteenth century. The design of the figures is very agile with excellent colour harmony and execution. Van Genechten manufactured playing cards in various styles, including specially customised versions for commercial clients wishing to advertise their own brands on the cards. Carreras issued a number of advertising packs, cigarette and trade cards, miniature packs, etc during the 1920s and 30s. Standard Genoese pattern with French indices made by Biermans for Cigarrillo Holiday and the Estanco de Naipes del Perú. There is an underlying element of subtle humour in these cleverly designed playing cards, gently questioning the issue of legality.