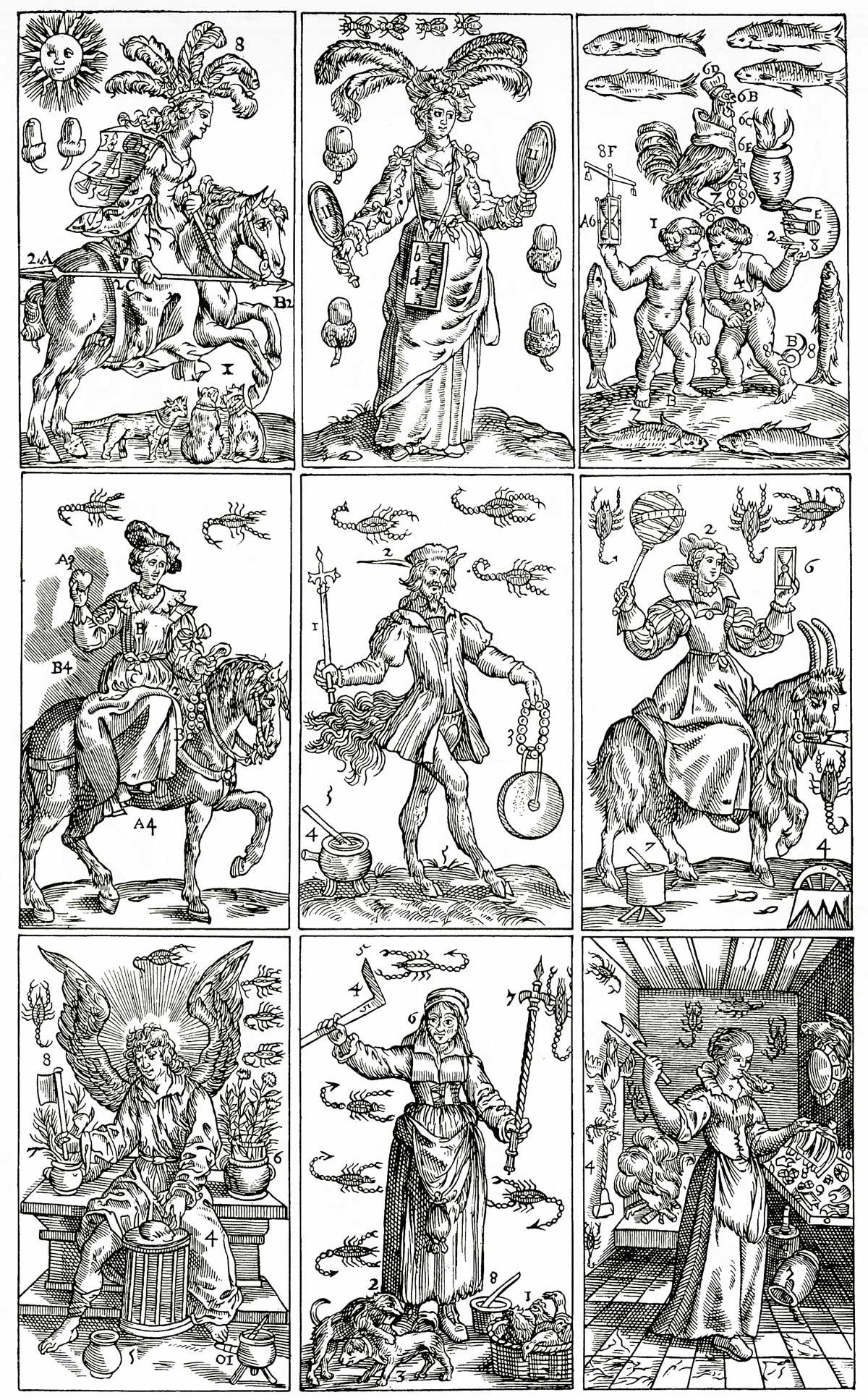 1. The face of this World is subject to the face of the heavens.   2. This locus has Gemini as its basis. 3. The rider is Perseus, 'La Morte', here depicted as a femme fatale. 4. Modelled on Canis minor, the more northerly of Orion's two 'dogs' 5. Capricorn, reworking the older model of Auriga as 'Magus' 6. A very interesting adaptation of Orion's form. 7. The astronomical locus is the furthest extreme of the southern heavens. 'Strength.'  8. Here the heavens' 'fallen angel' Canopus. 9. Probably based on Canis major, whose chief star's character as Sothis, 'the piercing supporter' was well known in Europe. Semaphoros.

Notes and Comments by Diane O'Donovan:

Influenced by Byzantium, Vittorino da Feltre's school 'La Giocosa' revived in Italy the habit of using exercise-games in elementary levels of teaching. From that model, perhaps, the Franciscan named Thomas Murner in the late fifteenth century devised his course for teaching elements of logic. He presented students (in parallel with his 16 written lectures as 'Letters' or charta), with suites of practical exercises and mnemonic diagrams to supplement and reinforce students' memory of the material. Each lecture was linked with its associated exercises and diagrams by use of a common emblem, the 16 emblems speaking to philosophical symbolism and to stages of progress through academe's 'little year.' In 1509 an outline of his astonishingly successful method was published - probably by the University of Cracovie where Murner taught ' under the chief title Logica Memorativa: 'Memorials of Logic.' The published book provides an outline of that teaching method, together with the format for students' exercise-games and copies of the mnemonic figures. Hargraves quotes an anonymous inscription, dated 1842, which suggests Murner's success was due to the 'use of a card-game to teach logic' but this is an exaggeration, for although the book's advertisement does distinguish between the new style of elementary teaching: 'chartiludum logice' and the token-using exercises: 'cum iucundo [iuc = joc] pictasmatis exercito' Murner's intention was not to teach logic by means of a card-game so much as to offer the sort of programme composed of text, exercises and demonstration figures that is now usual in modern primary education. The 16 suit-signs, incidentally, should be understood as a doubled, or complementary circuit of 8 parts, the mnemonic figures as intrinsic to Murner's approach. His 16 emblems (as listed in Hargraves) were [hawking-] bell, fish, acorn, scorpion, lobster, cap, heart, grasshopper, sun, star, bird, moon, cat, shield, crown and serpent.

Connection between the principles of card-pack construction and those of Murner's mnemonic figures is plainly evident, but so are the differences. A card-pack's emblems normally alluded to the quarters of time and direction, while Murner's are keyed to his sequence of lectures. The emblems and pictorial figures in standard packs were derived ultimately from astronomical types, but Murner separates the allusion of his suit-signs from the astronomically-based anthropomorphic figures. The published book omits Murner's lectures, too, which are the heart of his programme. The University appears to have chosen instead to promote the overall method, providing a course outline and copies of the basic materials. Our following comments are not upon that course, but upon the sources from which Murner himself drew when designing these memorial figures. One should consider them as items in a thesaurus, whose reference languages are Latin, German and Greek.

1. Murner's guiding principle in design for his Course, its exercises and imagery, is well embodied by the figure given for [step] 4 in the Acorns' suite. We might cite a phrase from the Centiloquium: 'The face of this World is subject to the face of the heavens.' The 'World' here is represented by the female figure, whose paired mirroirs are intended to suggest the upper and lower hemispheres, as well as the 'epitome-form' itself. Books of concentrated matter - in the form of extracts from texts or figures for reflection - were then known as florilegia, tresors, thesauri or mirroirs. This figure of the World reminds us at once of the 'epitome' represented by this curriculum, and of the condensed mnemonic figures which are at hand, while at the same time alluding to the physical pinnacle of the world, the Pole star [cynosura]. We see that the 'World's' better side is given by reflection upon the higher glass, an idea emphasised by marking that glass with the theologian's number of divine perfection '1'. The opposed and lower glass is marked by the number '11' ' equally traditional as the number for error and sin. Logic's deductive and inductive processes were similarly polarised, as were most of the discursus games derived from the style of the joc.

2. The eighth locus in the Fish suite takes the constellation of Gemini as its basis. The twin to our right is understood as having been led to err (by allusion to the Gospel narratives Mat.18:6; Rev 18:21-23) while the other maintains a 'righteousness' associated with right measures and proportion. The representation of the corrupted twin's left leg conveys Murner's knowledge of Arabic nomenclature in astronomy.

3. Stage Two in the suite of the 'lobster' shows a mounted figure holding up the emblem of the heart. The rider is Perseus, 'La Morte', here depicted as a femme fatale. In other figures derived from Perseus' moral character, the heart may become a cup, since both were significant ' in astronomical lore ' of the ultimate trophy or triumph of the Pleiades. The rider displays the poor lover's heart as that trophy and naturally suggests the endlessly popular theme for discursus 'Amor vincit omnia.' But mere earthly love is not here suggested as being greater than Death itself. The rider wears a string of pearls which ' as throughout Murner's diagrams ' informs the viewer that a figure promotes carnal or earthly knowledge over spiritual wisdom, after the way of the Fool.

4. Here we see the figure for a 'bitter' lower constellation, which southerly locus in these diagrams is invariably indicated by some form of grinding tool. The woman appears to be modelled on Canis minor, the more northerly of Orion's two 'dogs'. Traditionally considered the weeping wife of a cruel master, Canis minor is called in Arabic 'al Ghumaisa' ' the weeping, but here is shown 'crying aloud' in a different sense. In many card-sets she appears with Taurus in the guise of a horned and trident-bearing demon. Her connection with the demon-as-husband goes back to Egyptian times in the east. Murner's having her uphold the 'rule of 50 ' latin L' alludes to a monastic custom of treating the 'l-rule' as symbolic of the Egyptian [and Egyptian Jewish] traders. It implies also the Egyptian habit of orienting to the 'bent' southern Pole, rather than to the eastern or northern.

5. This female figure mounted on the goat is another example of Murner's giving female form to a constellations normally depicted as male. The construction of this whole mnemonic demonstrates Murner's practical knowledge of astronomy, and his understanding but disdain of horoscopic astrology. In addition, the reversal of gender would support a religious emphasis on the stars as inanimate and gender- neuter while at the same time facilitating the 'sic et non' style of logical debate. In most card sets, though, it is Auriga who is properly the master of measures. Most often tagged 'Magus,' Auriga was patron and guide of Crete, his goat-star, Capella being identified with Amalthea, nurturer of the infant Jove on Mt. Ida. Murner, however, transfers the entire character to the constellation of Capricorn, which astrology appointed to oversee the period of Christ's birth at the winter solstice. Murner indicates this altered reference by providing Capricorn with its identifying long horns and by setting the usual grinding implement below to indicate its southerly locus. Murner takes his division between the northerly and southerly celestial figures to be the line of the ecliptic, where the older method had taken the celestial equator. Becoming general about the mid-sixteenth century, this habit of re-working the older moralised heavens very swiftly led to a complete disintegration of the old ' indeed ancient ' memorial heavens.

6. A very interesting adaptation of Orion's form, the presence of the millstone once again suggests the erroneous teachings of the 'Fool', but also that corruption invoked most notably in the d'Este pack. Murner recognises the 'three-point' of Orion's head, and makes the rearmost point especially prominent. Cloven hoofs signify always a demonic character, and so speak to another long- established strand of thought about this constellation. Murner's evident confusion about whether or not Orion is al Ghumaisa's demonic master is understandable, especially since another of Orion's conventional characteristics was that of being 'a devilish hard task-master.' This idea is to be seen again in illustrations of the Picatrix. Murner evidently thought that to beat knowledge into the young in the older way was stupid and unnecessary, his allusion to the ostrich again referring to this idea. Job 39:13-18, speaks of the ostrich as 'hardened against her young ones ' God hath deprived her of wisdom, neither hath he imparted to her understanding.'

7. The astronomical locus for this occulted 'hell's kitchen' is found at the furthest extreme of the southern heavens where monastic tradition had an anti-cynosure in the form of woman bound to the 'hell-mouth'. Her character was considered both concupiscent and brilliant - a hair-splitting disputant. She was also supposed responsible for luring ships to their doom, and was in that sense the 'breaker of ribs.' The celestial ship held securely by her magnetic attraction was the great figure Argo Navis. In more positive versions she becomes 'St. Lawrence' upon his burning grid, or Persephone, enduring endless lonely labour in the southern underworld. 'Strength' is her most common tag in card-sets.

8. Here the heavens' 'fallen angel' Canopus, a figure half-hidden and half revealed, is shown in a way that makes clear the influence of Byzantium. Canopus is the pilot-star of the southern Argo Navis as 'arca'. In most depictions he becomes the hermit lucifer, the fallen light-bringer. Murner however has adapted for his image the form of the Byzantine Perseus, which was commonly shown as the Angel of Death seated by (or on) Christ's tomb. Correctly the southern heavens' 'tomb' is a constellation below Canopus and was indeed considered the place from which souls emerged or re-emerged. The Arabs called it the Murraba' and we now know it as Crux, the Southern Cross. It appears in most 78-card packs under the tag 'le Judgement.' From the earliest period of card-use, an ancient habit which supposed that the hidden southern stars must exactly mirror the form of the northern plainly influenced the pictorial forms. Combined with the need to arrange the astronomical types by pairings, that fixed idea contributes largely to the commonly confused and inaccurate forms on card.

9. Murner's flexibility in constellation-gender makes this figure difficult to identity without comparison with the full set. I am inclined to believe it based on Canis major, whose chief star's character as sothis, 'the piercing supporter' was well known in Europe. Despite its southerly position, the constellation was widely revered in pre-Christian Italy and France, eventually being sanctified as [St.] Guinefort. It may be, however, that Murner was thinking rather of a star just above the ecliptic, a Lyrae, whose Latin name was 'fides' and whose harp in western moralia and heraldry was often made into the form of a shield. Whether identified with Sirius, with 'Fides' or even with Aquila, the figure is intended as one of a pair, companion figures to the radiant Lord travelling his east-west road. [Guinefort comes from a root meaning to signal or flash intermittently. With regard to the eye's flashing light it came to mean 'winking'.]