The Cavaliers are man/beast creatures. The Valets (or Pages) are male for clubs and swords, and female for cups and coins. 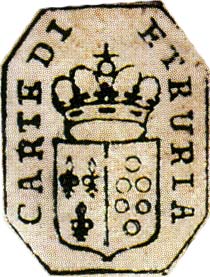 This antique “Minchiate Etruria” deck by Pietro Alligo was originally published in Florence in 1725, printed from copper plate etchings and hand coloured with water colours. Minchiate is a late-medieval card game employing a specially extended pack of 97 cards, related to tarot but including 12 zodiac signs, 4 virtues (faith, hope, charity, prudence) and 4 elements (fire, water, air, earth). The trump cards are untitled but are numbered with roman numerals in a scroll.

The game, like other Tarot games, is a trick taking game in which points are scored by capturing certain cards and sets of cards. However, the deck has also been popular with card readers who see it as a variant of the esoteric tarot because of the allegorical and symbolical content. The Cavaliers are man/beast creatures. The Valets (or Pages) are male for clubs and swords, and female for cups and coins. Further features include the replacement of the Papess, Empress and Pope by the Western Emperor, the Eastern Emperor and the addition of the Grand Duke. Some scholars believe that these cards may have served as teaching aids, because several trump allegories (Virtues, Elements, Zodiac signs) belong to categories upon which classical learning was based at that time.

The Cagliostro Tarot was first published in 1912 as “Il Destino Svelato Dal Tarocco”.

Stefano Vergnano’s Tarot and playing card factory holds a special place in the history of the Tarot.

The highly individual Sicilian Tarot has the Italo-Portuguese suit system with straight, interlocking swords and batons, and maids instead of jacks