The first magicians were those who attained a special knowledge of healing and poisonous herbs; or perhaps the magi were the priestly caste of ancient Persia and the wise men who visited the infant Jesus have been translated using the Graeco-Latin term ‘Magi’. The art of mystifying people is very old indeed. The first conjurers were priests who obtained power over simple minds by performing magical tricks which appeared to have a supernatural origin. Elizabeth I enjoyed watching card tricks and in 1602 paid an Italian magician 200 crowns for performing tricks such as “telling of any card that is thought, or changing one card from another though it be held by any man never so hard under his hand”.

Conjuring with playing cards gradually became popular as a form of entertainment. A professional magician today will admit that their tricks are based upon illusion and sleight of hand, or to be more correct: “Magicians also use psychology, misdirection, lateral thinking and down-right skulduggery!” (Thanks to Justin Monehen, Magic Consultant, Marvin’s Magic).

Above: five hand-painted conjuring cards, probably late 18th century. The first card reads "I Jonathan Hocus Pocus the art of conjuring teach.” Conjuring in those days consisted of a variety of simple magic tricks (“To Pass Balls Through Cups”), astonishing feats (“To Cook An Omelet In A Hat”), and macabre pranks (“How to Cut Your Arm Off, Without Hurt or Danger”). 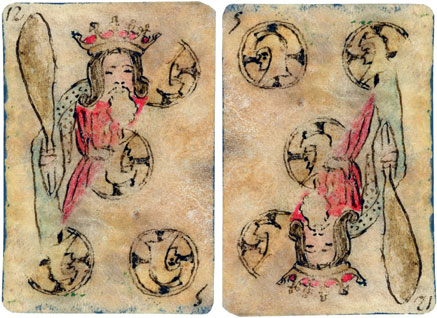 Conjurer’s cards were often divided diagonally, so that one half of each card shows a figure, whilst the opposite half appears like a normal pip card.  The cards shown above left were designed by W. Tringham in London (1772). The instruction card reads: "Instructions for useing the Cards. The Method of showing them is by keeping ye first card (which is a conjuror) allways at the front & turning the others Upside down, which will discover either figures or pips…"  By a mixture of false shuffling and sleight of hand, the cards can be fanned out and made to appear to change from figures to pips. The right-hand card is 18th century Spanish, ink on parchment, courtesy Biblioteca Nacional de España.

According to Keith Bennett (www.kbmagic.com) it "was not made as a trick pack by Alf Cooke, but would have been made into a trick pack by a magic dealer. Alf Cooke did however supply cards in two fractionally different sizes at one point in order to facilitate the manufacture of trick packs; they also made cards with backs on both sides as well as faces on both sides and partly blank cards".

See also: similar pack made by De la Rue, 1950s. The deck has 26 aces of spades and 26 normal cards. Look closely at the bottom of the Ace of Spades and note where it is trimmed. 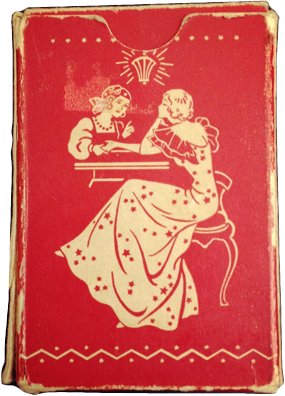 The deck contains 48 ordinary playing cards, 24 of which are the King of Clubs cut slightly shorter than the rest of the deck, specially for performing magic tricks, as in the example above. 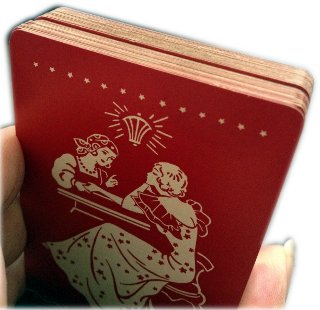 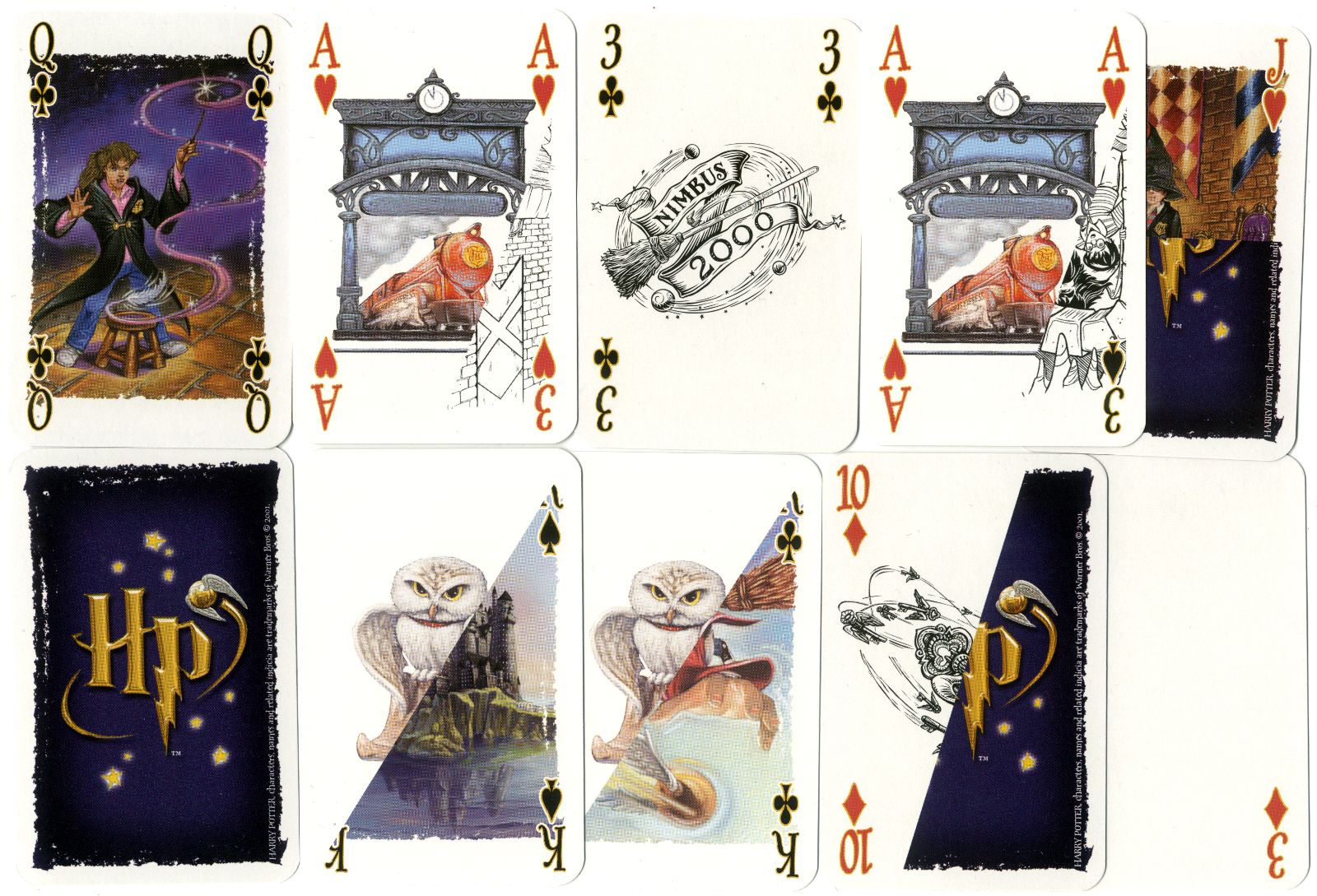 Above: 'Harry Potter' Playing Cards for Magic Tricks, made in Belgium by Carta Mundi. The set includes an instruction booklet describing 12 different card tricks which can be performed using these cards. All images (c) Warner Bros.

Sharks was a "limited edition" (short production run, available at very few outlets) magician's pack produced for DMC of England. The pack is of high quality linen finish card with two identical jokers, a blank faced card and a double-backed card presumably as extra props for card magic. The king of diamonds is also rather custom! 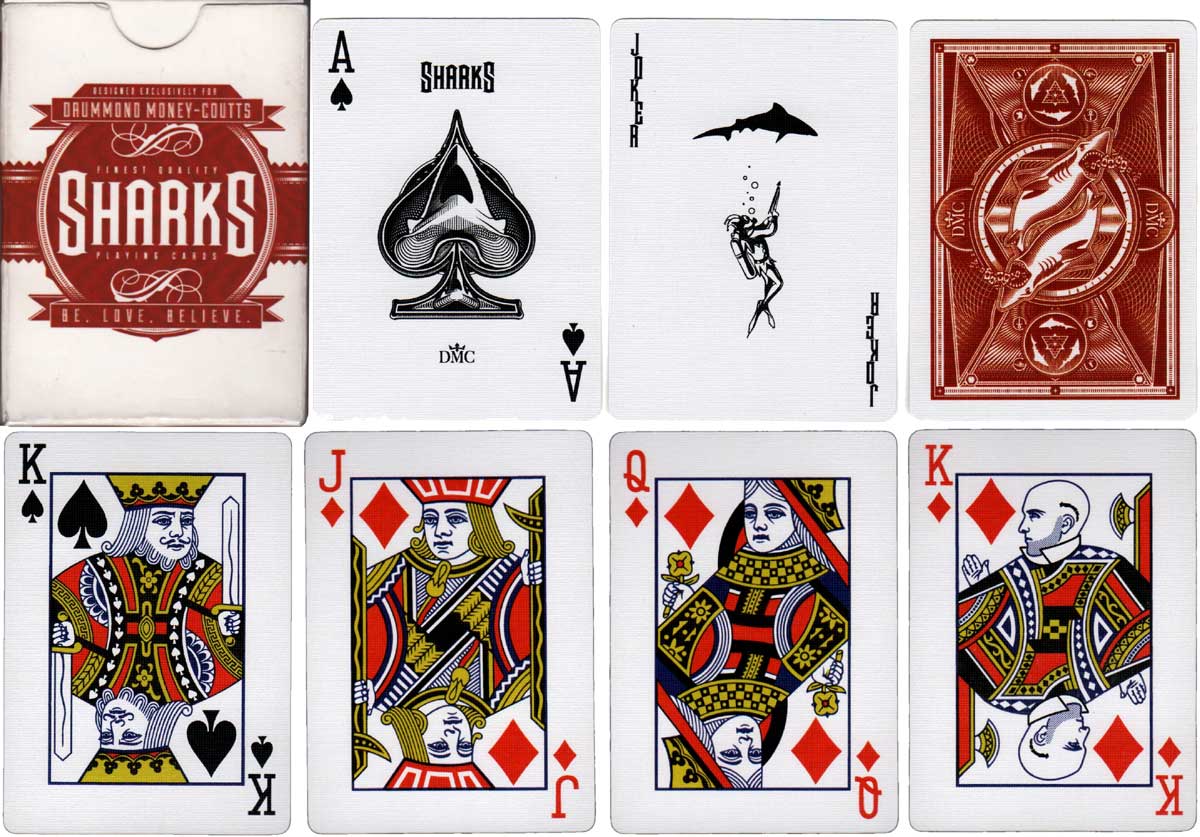 Enzo Koté is a magician from Venezuela with more than 35 years in the world of magic.

In the Italian Renaissance an early magic book saw the light. The work of Franciscan friar Luca Pacioli (1445-1517) ‘De viribus quantitatis’ (On the power of numbers, c.1496-1508), contains the first reference to card games, as well as instructions to carry out juggling, swallowing fire, dipping hands in molten lead or making coins dance.