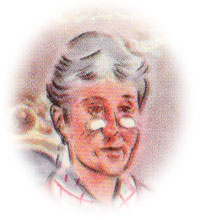 “Old Maid” is a Victorian family card game probably deriving from an old gambling game in which the loser pays for the drinks. It is known in Germany as Schwarzer Peter, in Sweden as Svarte Petter, in Denmark as Sorteper, in Hungary as Fekete Péter, in Finland as Musta Pekka (all meaning "Black Peter"). Chad Valley’s “Old Maid” game was published in the 1950s. All the cards are presented in a colourful style depicting various crafts, trades and professions. The object of the game is to form matching pairs of cards but to try to avoid being the player left holding the “Old Maid” card, who is the loser. In this edition the “Old Maid” is depicted as a grey-haired lady sitting knitting accompanied by her white cat. See the Rules→