Published by Justo Rodero with Gaucho suit symbols, the mate gourd, the sun, "facón" and gaucho club (palo borracho), "Naipes Casino Estilo Argentino" was designed to capture the essence of Gaucho culture in graphic expression. There were several editions spanning 1949 - 1970s in either hard slip-boxes or cardboard tuckboxes. The four of gourds carries details of the company's name and address which, along with the government tax stamp, aids in dating. Packs produced after 1968 do not have a tax stamp.  (See "Naipes Casino" for further information). 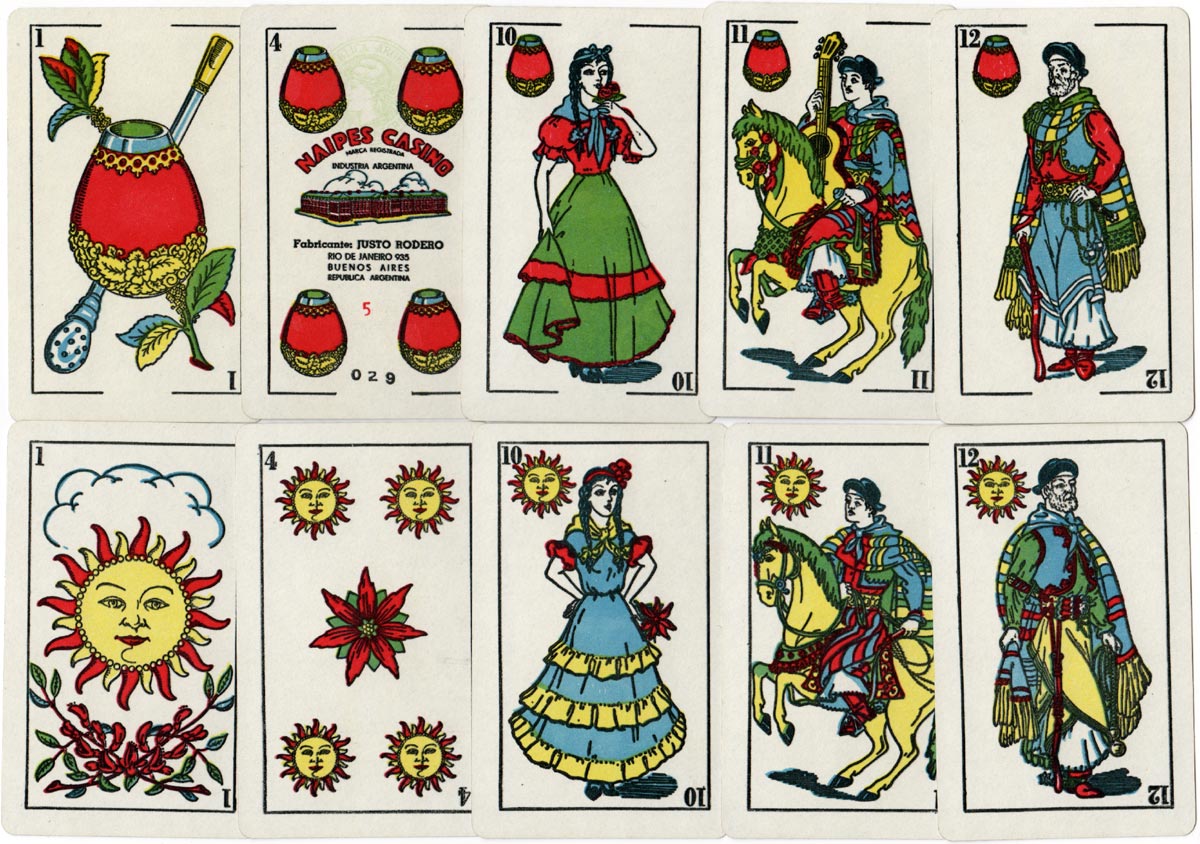 Above: Naipes Casino Estilo Argentino published by Justo Rodero, c.1955, with Gaucho suit symbols. 40 cards in a hard slip-box, plus extra card. The company address given on the four of gourds and the box is Rio de Janeiro 935, Buenos Aires. 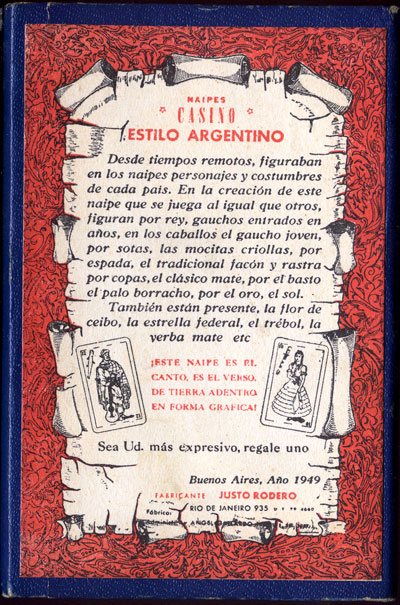 Right: packs published in hard slip-boxes carried an explanatory narrative on the back of the box (shown right). These packs were first published by Justo Rodero in 1949. The text explains that the Kings represent elder Gauchos, the Cavaliers represent young Gaucho men whilst the (female) Jacks depict young "criolla" maidens. 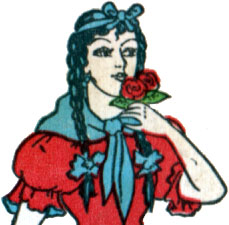 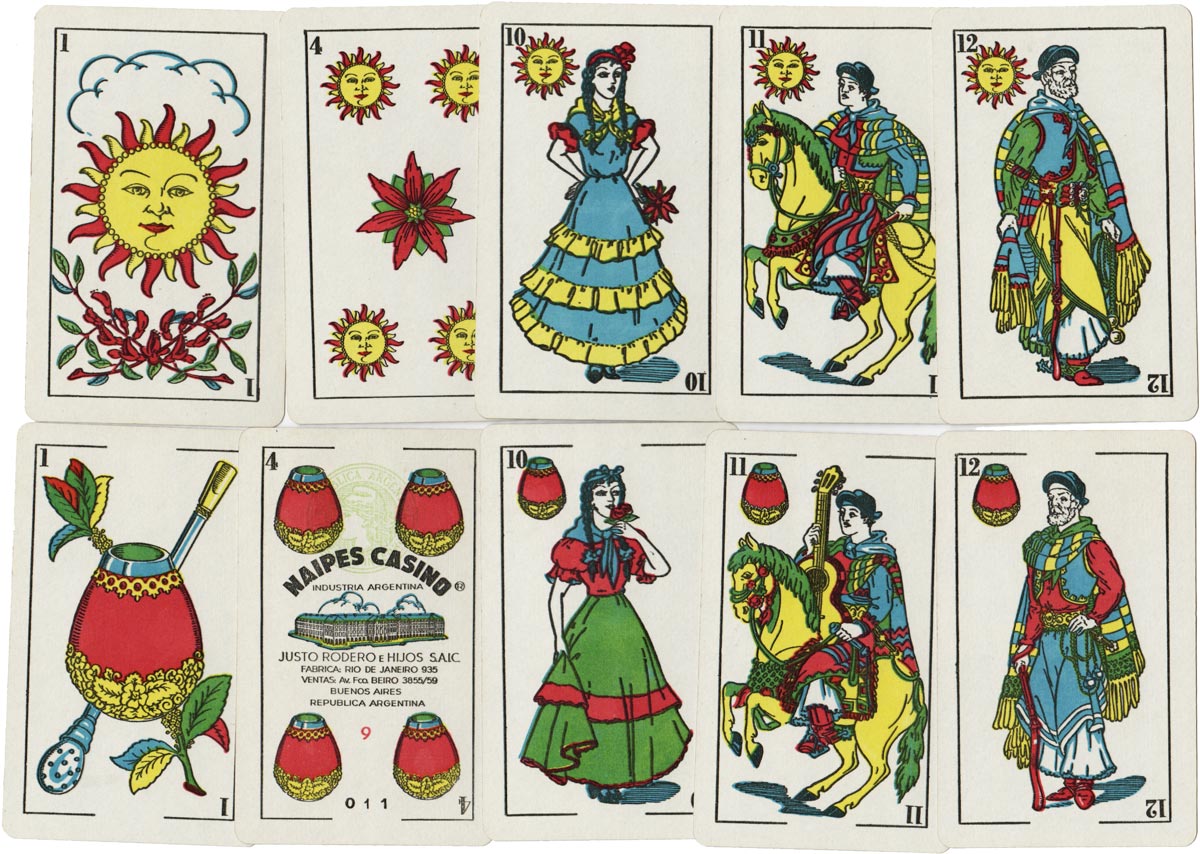 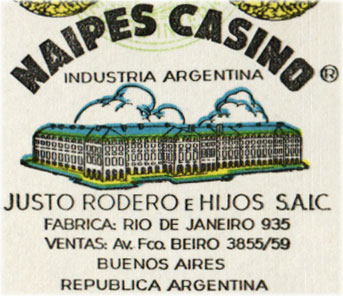 Editions of Naipes Casino Estilo Argentino can be found with any of the above company names and addresses given on the four of gourds, as well as the evolving logo designs. 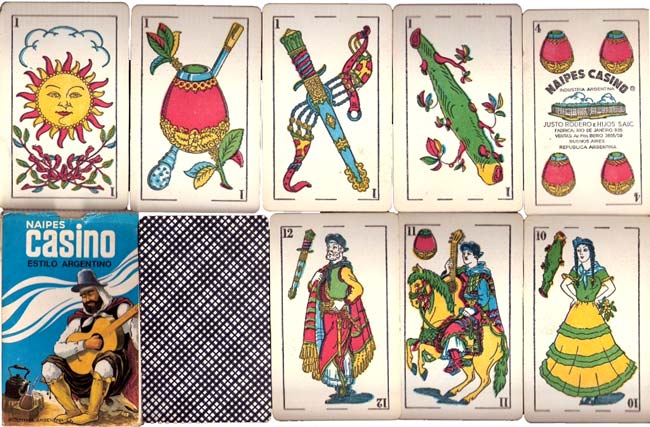 Above: Naipes Casino Estilo Argentino published by Justo Rodero e Hijos S.A.I.C. in a soft cardboard box, c.1970. The details on the four of gourds are the same as in the above example, but there is no inland revenues tax stamp, which was discontinued in c.1968.

Justo Rodero also manufactured standard Spanish-suited cards titled "Naipes Casino" and "Naipes Habana", as well as Anglo-American Poker-style packs. The company is still in existence today and is one of the leading manufacturers in Argentina  (website: www.naipes-casino.com.ar/).