On page 11 I illustrated several examples of the regional French patterns from Sylvia Mann's collection; this is a more in-depth look at the figures of these patterns ("portraits" in French).

In 2015-16 I published an article in two parts about the court figures that appear in the French regional patterns in The Playing Card (Vol. 44/2 & /4). This is a simplified presentation of my findings. My aim is to trace the history of some of the figures and see how they were distributed in different patterns. I restrict myself to the French-suited patterns, though some of the figures appear in the Spanish-suited packs from Southwest France, too. For our purposes here, the standard English pattern is a French regional one. 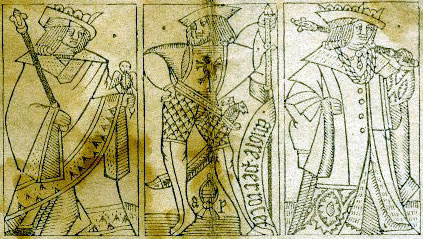 The earliest recognizable figures appear in the last part of the 15th century and the first half of the 16th and some of them are still around today, even though their appearance has changed, sometimes quite dramatically. One of the earliest court sets comes from Lyons by a maker named Andre Perrocet, who is known to have operated from 1491 until 1524. The KC from the Perrocet set turns up facing the other way in Burgundy and later in the 18th century Lyonnais pattern carrying an orb as well as a sceptre. 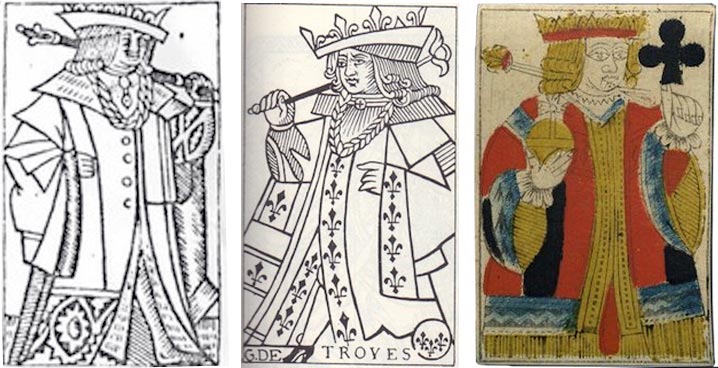 Although the Perrocet sheet is uncoloured without pips, it is easy to determine the suits from later examples of the courts. In the case of the Burgundian example it, too, is from an uncoloured sheet, but there are plenty of coloured examples to indicate the suit. The differences in detail between the three examples need not concern us too much. The orientation of a figure is quite arbitrary and can be changed, if the original is copied directly onto the block without making the necessary adjustment of turning it to produce a print facing the same way. The addition of features like the orb in the later KC can be seen as a deliberate attempt to make a difference with what is being copied and/or 'artistic licence'. In some of the earliest uncut sheets there are examples of the same figure facing different ways and the same figure holding different attributes. On the example below there are two KCs (Alesandre) each facing in opposite directions and two JC, one with an arrow and one with a halberd. 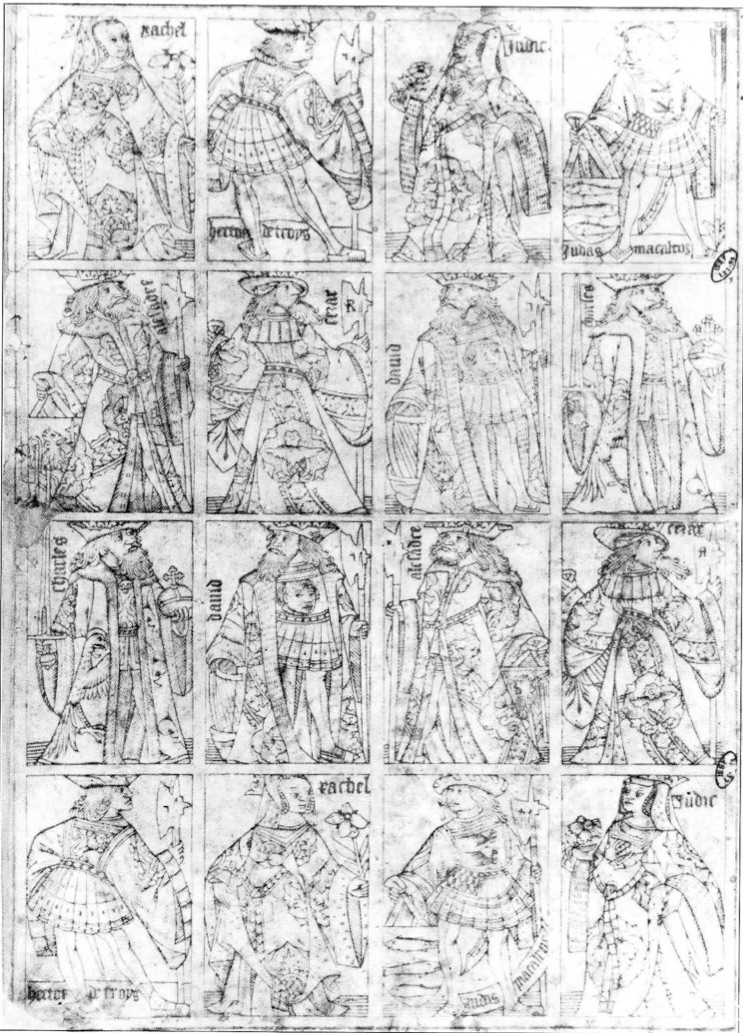 Above: Uncut sheet by Guymier (?c.1500 or earlier). This is a very early version of the first Paris pattern; the name of the JC is Judas Macabeus (not Lancelot).

So, the change of orientation and the alteration or addition of attributes need not concern us in dealing with sameness of figure. They are within the range of possible variation and, of themselves, do not necessarily constitute a different figure. (Think of the variation found in the standard English figures, a major topic of this blog.) We can now move on to consider the various figures in the regional patterns and determine their distribution throughout the different court sets. I've numbered each figure for reference. 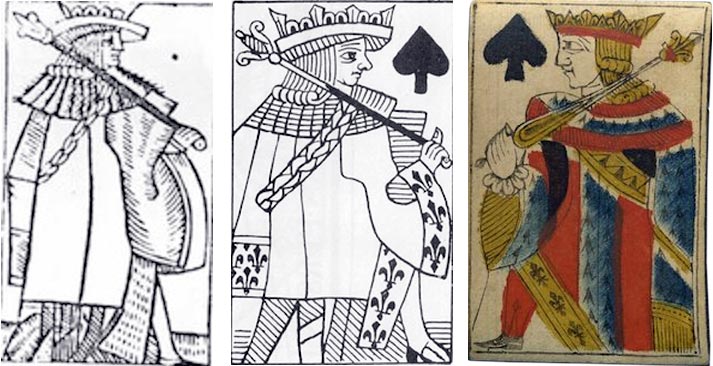 K2 is a clean-shaven KD from the second Lyons pattern (which eventually became the Austrian patterns A and B), a bearded KD in Auvergne and a bearded KH in Dauphiné. The last two are holding a dagger in their belt. 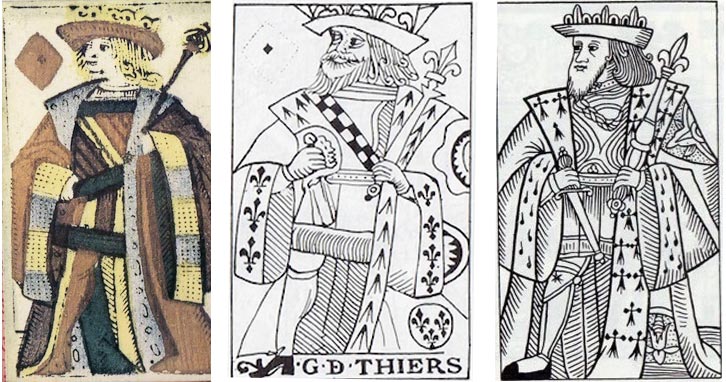 K3 is another descendant of Perrocet's court set found in the third Lyons pattern of the 18th century. In both cases he is the KD. 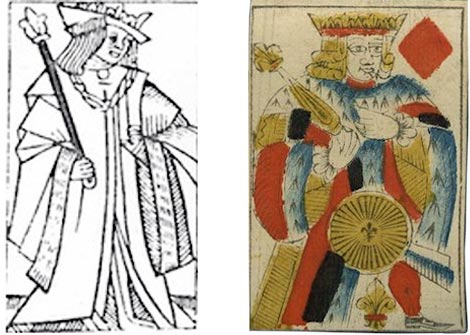 K4 is the bird-holding king found in a number of patterns: KH in Perrocet's set and in Provence; in Lyons 3 he is facing left. In Dauphiné he is KD facing left and in Auvergne KC facing right.

K5 is exemplified at the top of the page.

K6 is KS in Lyons 2 and Auvergne, KD in Provence and Burgundy and KC in Languedoc, the last three facing left

K7 is the axe-wielding king found in a number of patterns including the English standard, though he now wields a sword behind his head. The Rouen example below is from the Maréchal court set. In Languedoc he is the KS and in Provence the KC facing right. 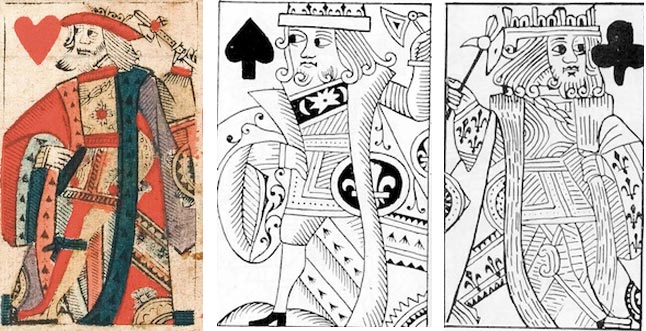 There are other figures that are more restricted, which I discuss in my The Playing Card article, but I will close this page of kings with just one more.

K10 is the first Paris KH, the Auvergne KH facing left and the Dauphiné KC. 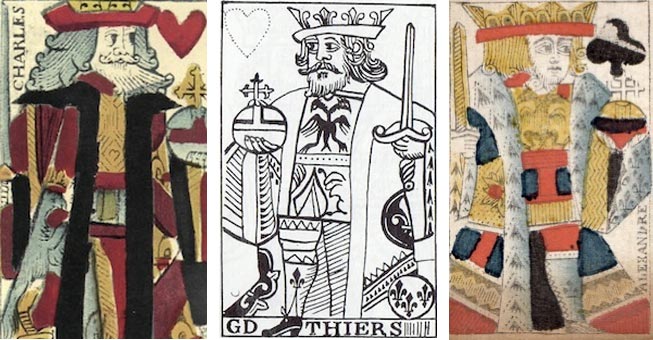 The queens and jacks will be dealt with on the