Aluette is a card game popular in Brittany and the West coast of France, usually played with a special pack the design of which is descended from Archaic Franco-Spanish models. The cards have Spanish suit symbols, the courts have become somewhat stylised and many of the numeral cards contain additional decorative motifs or embellishments which were incorporated by earlier manufacturers or are related to the game-play. Traditional (or archaic) features include a kissing couple on the Five of Coins (once the Catholic monarchs Ferdinand and Isabella) and a naked child on the Ace of Swords. The Cavalier of Coins is shown in partial back-view.  See also → Lequart Aluette   Dieudonne Catalanes   France-Cartes Aluette 1976 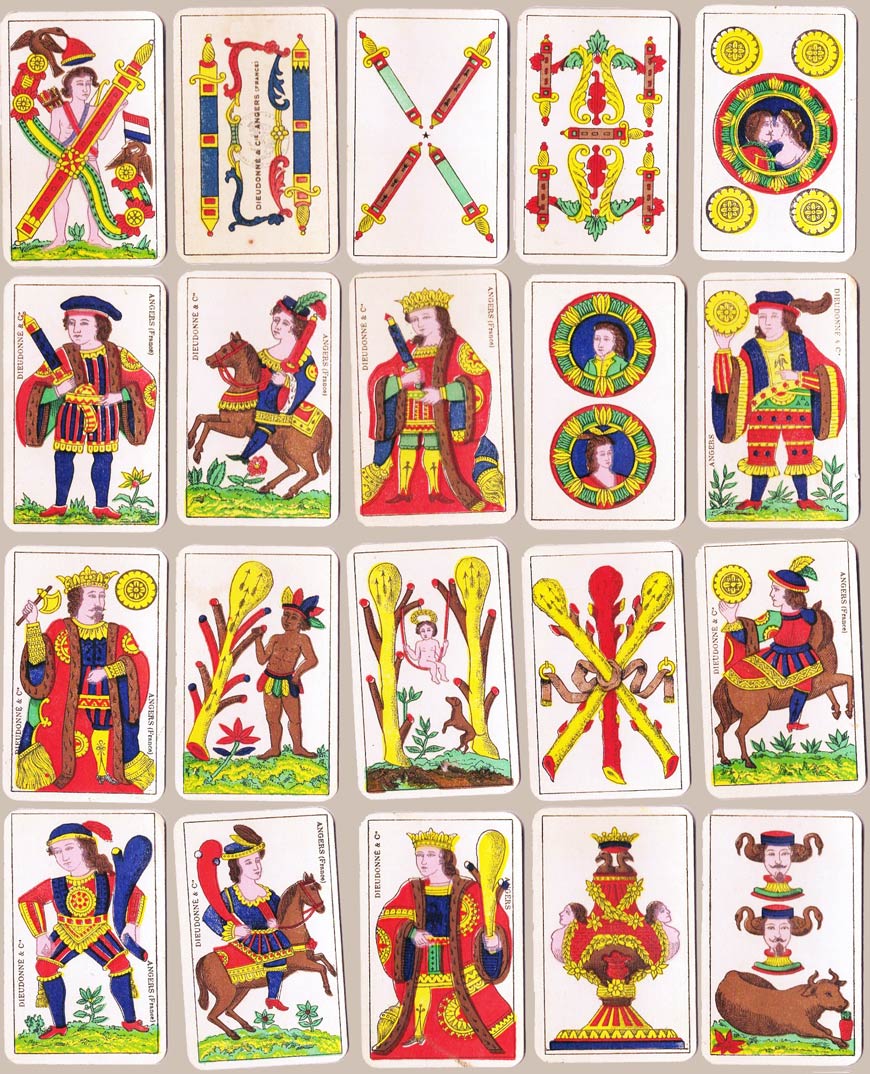 In around 1754 Jean Dieudonné (c.1720-1795) relocated from Metz in France to Grevenmacher, in eastern Luxembourg, near the border with Germany. In that same year, being a widower, he re-married Marie Elisabeth Lejeune, a merchant’s daughter. After launching his new business and building it up, he successfully become head of a dynasty of cardmakers. After Jean Dieudonné's death the business was managed by his widow, Marie Elisabeth Lejeune. 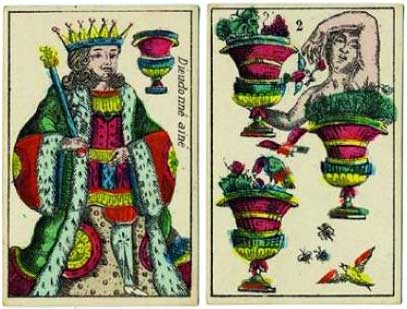 Above: 2 cards by Mathias Dieudonné the elder.

The history of the firm is closely linked to the political changes that have marked its existence. Thus, following the French Revolution and the annexation of Luxembourg in 1795, it was forbidden to represent crowned heads on playing cards, and when in 1797 the French government introduced the tax on card games, it took all the commercial intelligence of the Dieudonnés to ensure the survival of the company. Several sons and grandsons became cardmakers thereby continuing the family name (Georges (1759-1828), Jean II (1764-1793), Mathias I (1768-1840), Mathias II (1795-after c.1840) and Antoine Dieudonné (1789/1802-1864)).

Cremers (1994, p.63) suggests that Jean Dieudonné may have learned his trade at Metz but been forced into exile by the strict tax regulations in France. His move to Gravenmacher may have been in order to avail himself of paper supplies, materials and clients in the Rhine valley area, accessible via the Moselle river. The products of the Dieudonné factory were mainly intended for the foreign market, the tax advantages in Luxembourg creating a context favourable for this flourishing craft. Seeking government tax concessions, Dieudonné claimed to be the sole supplier of playing cards to the inhabitants of Luxembourg. The successors of Jean Dieudonné continued the manufacture in Grevenmacher until 1880, when Jean-Paul Dieudonné decided to abandon the production of cards in the township. Other branches of family descendents emigrated to France, Orleans and Angers, taking the business with them where it became known as Dieudonné et Cie. The firm of Thomas Woolley lasted for many years from 1836-1904 in several different guises. Hudson Industries Pty Ltd of Carlton in Victoria was first registered as a printing company in 1920. In the 1940s they registered their own distinctive ace of spades and joker. British Playing Cards Ltd was the predecessor of Universal P.C.Co. and involved Alf Cooke of Leeds and Bemrose of Birmingham, and maybe one or two other printing firms.

In 19th century England there were a number of makers who produced cards in relatively small quantities.

This page continues the presentation of examples of the major English cardmakers of the 19th century. An overview of the courts and aces of spades produced by James English. Standard Playing Card Co. started producing playing cards in c.1890 but was in business for only about four years before United States Playing Card Company acquired it in 1894. An ‘Old Frizzle’ Ace of Spades was assigned to them in 1833. In 1853 James L. & J. Turnbull were listed as ‘Makers of Playing Cards, Pasteboard, Paper Glossers and Pressers and Drawing Board Makers. In December 1831 Thomas de la Rue was granted his patent for printing playing cards by letterpress. Berger also produced a Hungarian-type "Seasons" pack with the brand name "La Estrella" and a six-pointed star logo, which was subsequently used by Domicelj and Vigor, suggesting some sort of business succession. A. Van Genechten ran a flourishing business, supplying various kinds of cards both inside the country and abroad including England, Spain, France, Denmark, South-East Asia, China and Japan.

Originally known as Cappellano Hnos in the 1920s, and undergoing several changes of name and address, the company produced catalan style packs with the brand names "Naipes Triunfo" and "Torcacita" as well as an Anglo-American style pack titled "VELCAP". SOIMCA - Sociedade Impressora Caxiense - is an important playing card manufacturer in Brazil. It was established by Nelson Soares in Caxias do Sul, in the south of Brazil, by 1955. Amos Whitney Factory Inventory. What it was like inside an 18th century playing card factory...

Colour lithography was invented in 1798 by a Bavarian actor and playwright named Alois Senefelder (1771-1834). It is based on the principle that oil and water do not mix. The luxury playing card factory founded in Frankfurt am Main by Bernhard Dondorf in 1833 existed for 100 years.

Spanish-suited Aluette pack with 'FABRICANDO IN MADRID' printed on the Two of Swords and the legend Lequart - Paris printed in the top left corners of the court cards. Litográfica del Perú S.A. were manufacturers of playing cards in Peru sometime around the decades of the 1970s and/or 1980s.