The best Latvian playing cards were produced just after independence, during the period 1921-1942. 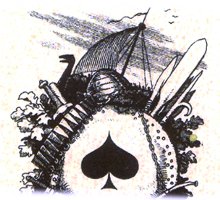 Livonians were amongst "the godless hosts of heathen swarming o'er the northern sea" along with Viking, Scandinavian and Icelandic pirates. Latvia was Christianised during the 13th century, and has been ruled successively by Poland, Sweden and Russia. Playing cards in Latvian are called Spēlu Kārtis. Latvians were apparently introduced to playing cards by the Swedes, because the word for court cards “Kungs” comes from the Swedish “Kung” (which means “King”). The meaning of “Kungs” in Latvian is “Gentleman” or “Sir”.

A 36-card Madame Lenormand type cartomancy deck was published in Latvia in 1876 by J. Schablowsky of Jelgava, titled “Game of Happiness”. The illustrations were in black and white and a Gothic typeface was used for the divinatory meanings printed on each card. The cards were decorated with astrological and zodiac symbols in the margins and featured a miniature playing card in the top left-hand section of each card.

From 1919-1921 there were no tax stamps on Latvian playing cards. Regulations passed by the Cabinet of Ministers in 1922 decreed that only the Latvian Red Cross had legal rights in Latvia to import, produce or sell playing cards. Packs were to be wrapped inside special wrappers with the Latvian Red Cross insignia and/or a tax stamp on the Ace of Hearts. This regulation was in force until the German occupation in 1941.

In 1923 a competition was announced for a new Latvian pack. The winner of this competition was the silversmith Stefans Bercs and this pack became the most popular in Latvia  see more →.

Above: Latvian pack designed by Stefans Bercs, printed by Ernst Platesa Lithography, Riga, 1923 onwards, with the Latvian Red Cross tax stamp on the Ace of Hearts. The artist's name appears on the King of Hearts as 'S. Beriz'.  see more →.

Possibly the most valuable Latvian pack is the one designed by Alfreds Scwedrevitz in 1936, the “Fifth National Latvian” pack...   see more →

Above: the “Fifth National Latvian” pack, designed by Alfreds Scwedrevitz in 1936   see more → Playing cards designed by artist Larisa Kovalass-Kovalevska on the theme of the Latvian folk epic “Lāčplēsis”. Reprint of “Lettische Trachten” deck first published in Latvia in 1918. The editors of “Privātā Dzīve” magazine conceived the idea for this new pack, which was designed by artist Lidmila Bulikina and printed by LGL Stils, Ltd in June 2001. Black Peter card deck for children printed in Riga during World War II, believed to have been designed by a Latvian artist. This pack was issued during wartime, in 1936, under the name “Latvian Red Cross Cards No.7”.

The best Latvian playing cards were produced just after independence, during the period 1921-1942. Playing cards designed by Rihards Zarinš, 1921. Latvian indices and with heraldic and hunting motifs reminiscent of the countries' ancient history and folklore. Reinholds Kasparsons, a popular Latvian illustrator of the day, designed this pack which was published as The Best Quality Playing cards No.1 in 1932.