Carel de Wagenaer was one of the earliest playing card manufacturers in The Netherlands, based in Amsterdam towards the end of the 17th century. He was probably of French origin. In 1697 Carel De Wagenaer’s shop “In de Gekroonde Haan” (Crowned Cock) was situated in the Kalverstraat near the Osse sluice. He advertised 3 sorts of cards: large sized French, small sized Dutch and tea cards (patience). Following the earlier trend of depicting classical heroes on the court cards, and evolving the new trend for educational and political decks, in this example the rulers of Europe are matched to the hierarchy of the playing cards.

The ♥ King and Queen of hearts depict William III and Mary II of England. The ♦ King of diamonds depicts the Spanish monarch Charles II, with his second wife Maria Anna of Neuburg as the Queen. Don Rodrigo was a governor at that time. Holy Roman Emperor Leopold I appears as the ♣ King of clubs, accompanied by his third wife Eleonor Magdalene of Neuburg as the Queen. Heyduck appears to be an outlaw or freedom fighter. Carel de Wagenaer himself appears as the ♠ Jack of spades, making a gesture of deferential respect, accompanied by King Louis XIV of France and his wife with a rosary and what look like angel wings as they were both devout Catholics. The numeral cards are plain. 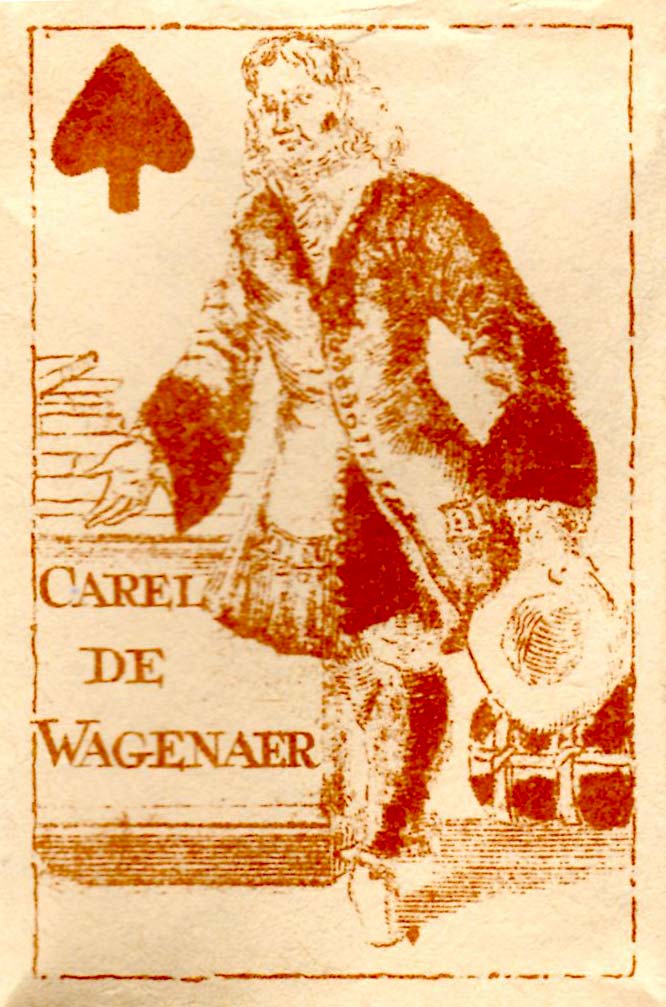 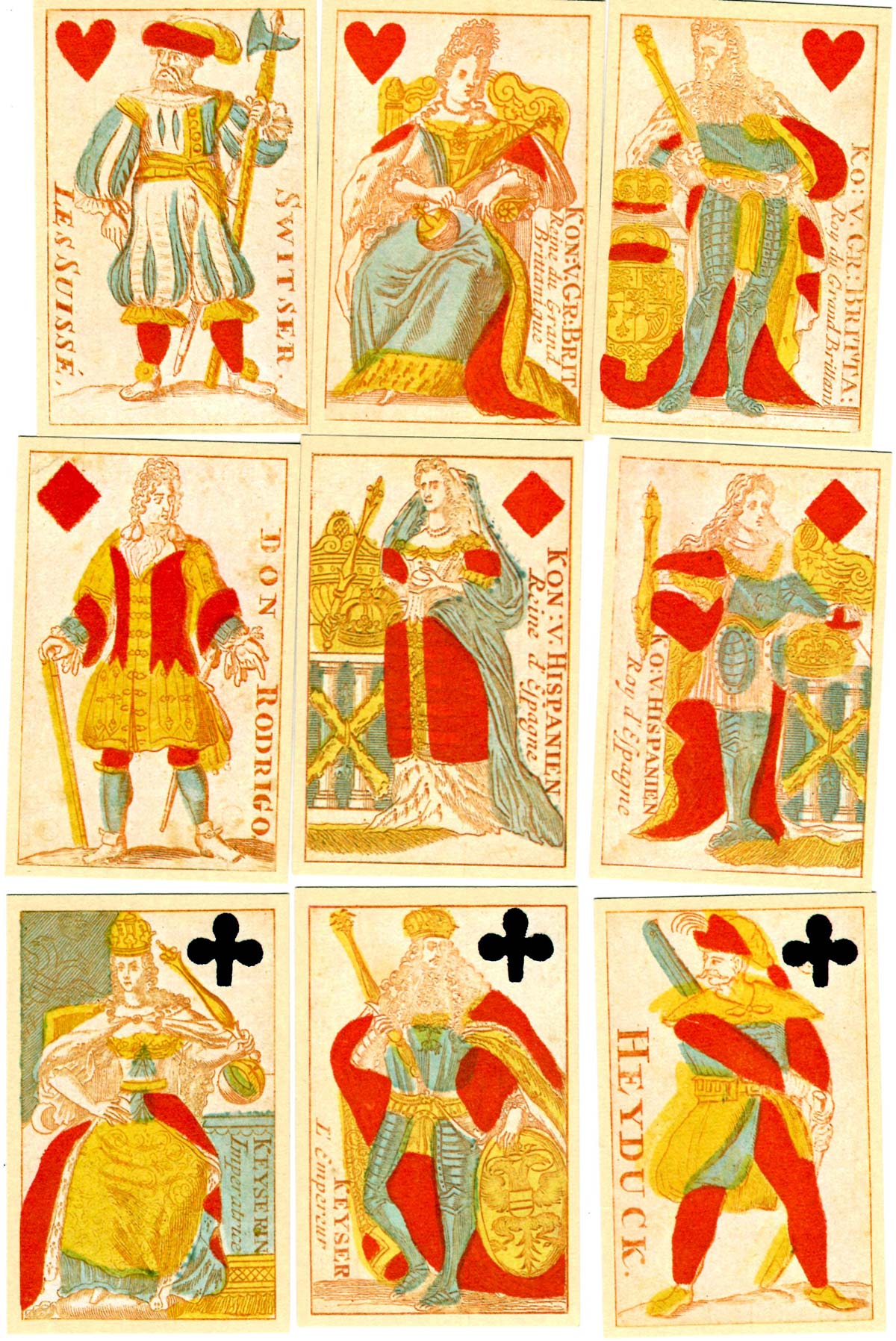 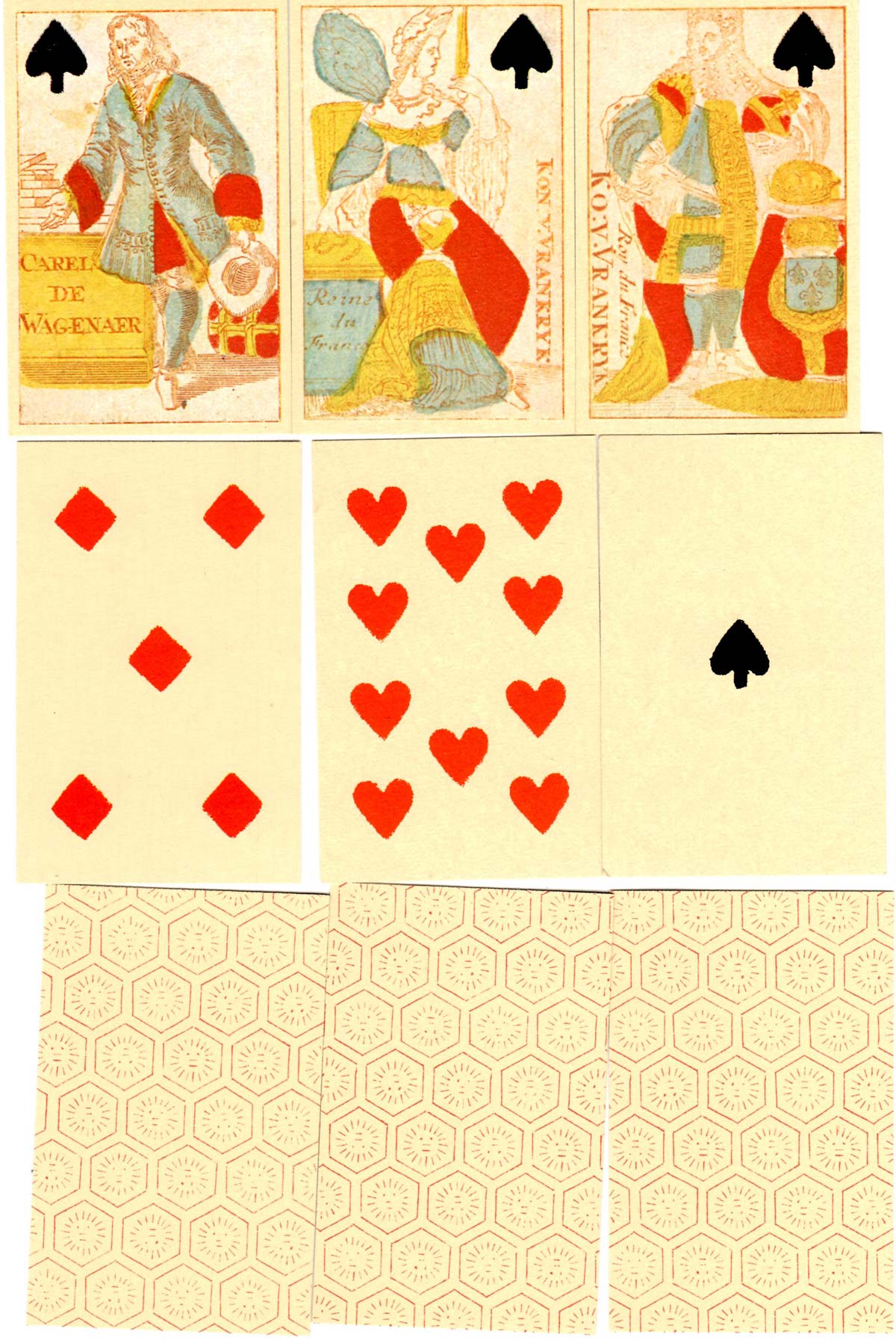 Above: modern facsimile edition of cards first published by Carel de Wagenaer, Amsterdam in c.1698. The publisher of the facsimile is not known, probably c.1975. Images courtesy Kathey Renault.

As an addendum to this article the following story was translated by Joop Muller:

In 1698 Antoni de Winter made an agreement with the manufacturer of playing cards Carel de Wagenaer regarding a partnership to publish certain kinds of playing cards. De Winter would engrave them and De Wagenaer would make-up the printed cards. On December 8 De Winter lodged a complaint at the notary Van Duynkerken who issued a warrant against De Wagenaer. The complaint was that De Winter had delivered 900 prints for ‘tea cards’ (patience cards) and later another 300. Together that would bring 8 grosses and 48 single decks, of which De Winter would receive half. Despite of all his efforts De Winter hadn’t received more than 20 dozen and two single decks. In the warrant De Wagenaer was held responsible for the financial loss (a lot of decks could have been sold already) and De Winter also announced that he would retreat from the partnership and keep half of the common copper plates. De Wagenaer answered that he would deliver all when De Winter had paid him.

Thanks to Joop Muller for additional research. Some images of the original deck can be viewed on Joop Muller’s website►