“Double Elephant” brand is the registered trade mark of Yuan Ho Xing, the name of the manufacturing company, which translates as “origin of happiness.”   Although the cards are used in Singapore, they appear to be printed in Hong Kong. According to my great aunt (an expert on these matters) there used to be yet another sort of four-colour-cards, which were shorter and squatter than the ones I show you, and had ochre-red backs. Images kindly supplied by Anthony Lee of Singapore. 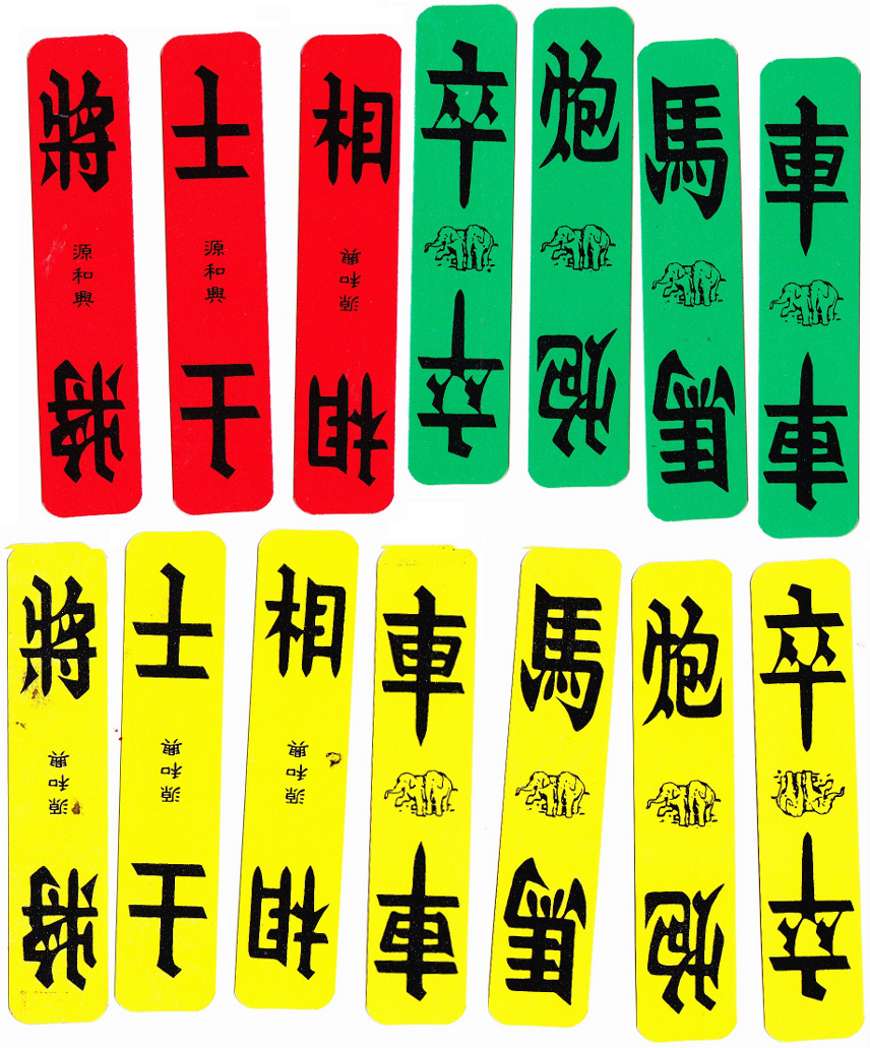 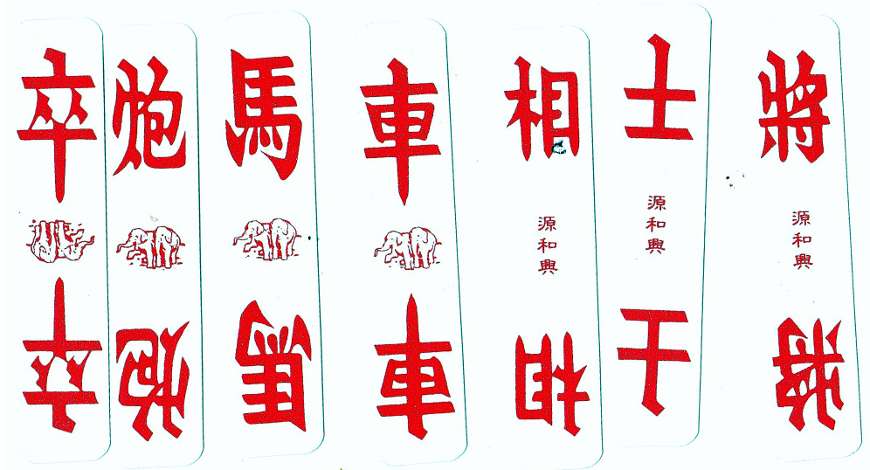 Above: ‘Double Elephant’ brand ‘Four Colour cards.’ The ranks are : 將- general, 士-advisor or valet, 相- elephant, * 車- chariot, 馬-horse or knight, 炮- cannon, 卒- soldier. * the character 相 taken literally means 'like.' Some sources translate this as 'minister.' By right, the character for elephant should be 象. The reason for this strange substitiution is that both characters sound much the same. Images kindly supplied by Anthony Lee of Singapore.

As in the above deck, with the brand name “Double”, the Chinese reckon twos, and even numbers in general as lucky. 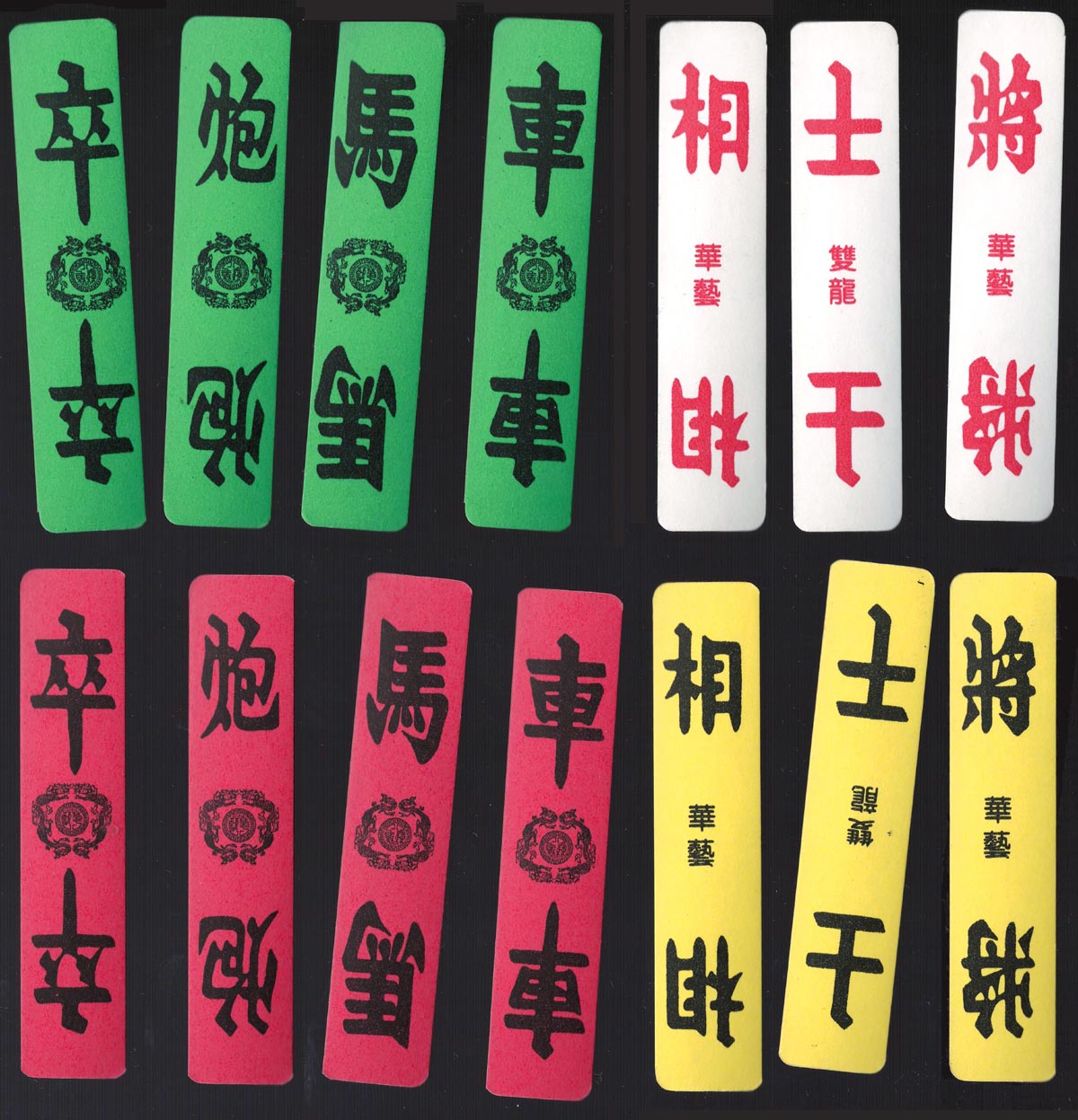 Above: “Double Dragon” four-colour cards by Hua Goi (華藝) Pte Ltd. These cards are are of the same pattern as those produced by the "Double Elephant" brand. The Chinese call these the "Chaozhou four-colour cards" 潮州四色牌 . Both decks possess the same basic structure. There are four colours or suits. In each suit there are seven ranks, 将， 士， 相，車， 马 ，炮，& 卒. This basic unit of 28 cards is quadrupled, giving the full deck of 112 cards used for the game.

In addition to ordinary 112 card decks, Hua Goi produced some decks with an extra five cards. These five cards are the "Jokers". These jokers are much plainer than the ones featured here or here. Instead of displaying the ranks of the Chinese nobility, they merely display the company's double dragon logo, and the legend 華藝雙龍 -- Hua Goi Double dragon [playing cards] Still, there is a pleasing simplicity about these designs,

In the ranks of 将， 士， 相, the maker has placed two inscriptions in the middle of the cards: First, "華藝" ( the company name, literally meaning "Honour"), and second 雙龍 ("Double Dragon" , the name of this particular line of decks). On the ranks of 車， 马 ，炮，and 卒., the eponymous double dragons make their appearance. This distinction between the central decoration reflects the way in which this game is played. It may also be seen in the "Double elephant" deck. These cards were considerably cheaper than the ones produced by the “Double Elephant” brand, partially due to their local manufacture. Alas, they are now no more. Images and notes courtesy Anthony Lee   Visit his Blog →