In 1860 the Fournier Brothers of Burgos (Spain) - Braulio, Julián, Gervasio and Heraclio - commenced producing playing cards. Having acquired lithographic machines from Paris, they produced high quality playing cards bearing a portrait of King Charles IV on a medallion, above a sleeping lion and a cannon, on the ace of coins. Their playing cards earned them the title "Lithographers of the Royal Household" from Queen Isabel II, as shown on the four of cups below. The youngest brother was called Heraclio Fournier. In 1868, at the age of nineteen, he left the family home and business in Burgos and moved north to Vitoria to establish himself as a printer and maker of playing cards.   more...

Above: cards from two different sets produced lithographically by the Fournier Brothers, Burgos c.1860. The medallion on the Ace of Coins shows an image of Carlos IV.

Over time, as events unfolded, the company underwent several changes of name. The firm ended up in the hands of one remaining brother, Braulio. Braulio Fournier de Burgos, Litógrafo de la Casa Real was followed, on Braulio's death in 1888, by Viuda de Braulio Fournier, which in turn was succeeded by Hijos de B. Fournier. Of the five surviving descendants of Braulio's second marriage, Teresa becomes the new company director and the name is changed to Hija de B. Fournier. The company continues to be managed by the next generation of Fourniers at the same location as the original business first set up in 1860 and as well as producing playing cards, postage stamps were also produced during the civil war period. The business was finally closed down in 1978. 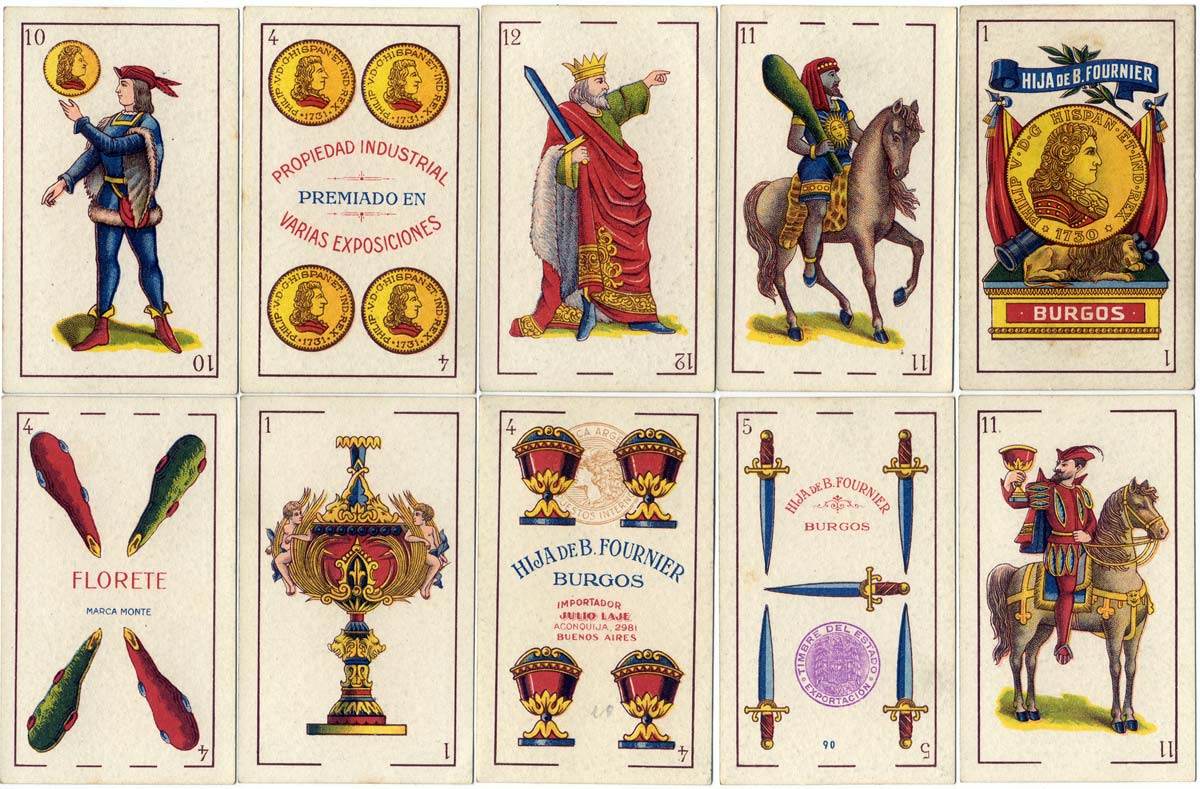 Above: cards from a pack of 'Florete' playing cards produced by Hija de B. Fournier, Burgos c.1930. The designs of the cards have been revised but the dark skinned figures on the clubs are still present. The ace of coins now contains a bust of Philip V.   more →