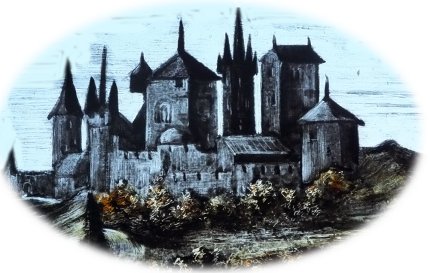 What we now know as ‘French’ suit signs - spades, diamonds, clubs and hearts - is the result of rationalisation of the manufacturing technique during the fifteenth century. Many early or archaic suit systems involved intricate motifs which were more time-consuming to reproduce, hence the French producers invented new ones which could be reproduced with the stroke of a brush over a stencil. The four shapes are easy to recognise - 2 red and 2 black. Some card makers were experimenting with a crescent moon as an alternative symbol, but this didn't catch on. Thus the ‘French’ suit system is now found throughout the world.

Cards shown below were produced in Rouen during the sixteenth century. The cards made in Rouen at that time were an eclectic mixture of features from cards made for various foreign markets, hence the origins of what became the "English" pattern are not one precise source, but a mixture of several earlier regional patterns. It was cards like these which were imported to England and are the ancestors of the modern ‘Anglo-American’ pattern   learn more →

In the hands of English manufacturers the cards gradually became wider, losing their original slimness and liveliness, and the figures became chunky and geometrical. They remained full-length until the nineteenth century when double-ended courts were introduced as another innovation by Victorian manufacturers.

Some early English playing cards can also be seen at: www.plainbacks.com→