French Happy Families games, or “Jeu des 7 Familles” tend to have extended families of six members stretching across three generations, making a total of 42 cards. Playing the game encourages observation and memory skills. The set shown here was made by Jeux et Jouets Français of Paris, who continued to make games until 1931. These cards are quite early, probably around 1910 and are one of a series of games in similarly styled boxes. The family trades depicted are: Lafleur (gardeners), Latourte (bakers), Lahure (butchers), Ducordon (caretakers), Lempeigne (shoemakers), Rapineau (artists) and Rémifat (musicians).

The rules were provided on a separate sheet→ 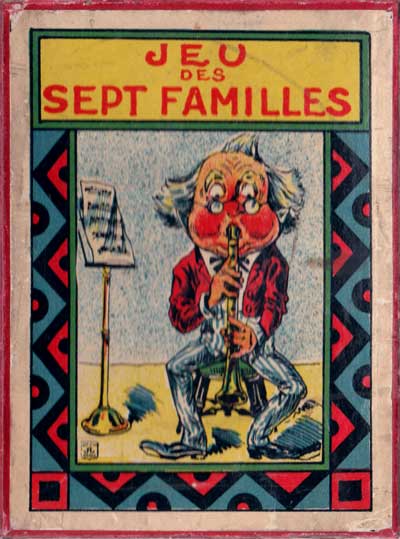 On the Grandfather Cobbler and the Daughter Cobbler cards are portraits on the wall behind them. These concern the French President at the time, illustrations representing Fallières, President of the Republic from 1906 to 1913, and Nicolas II (whom Fallières had met in 1909 in Cherbourg). See close-up here►

The small logos found on game boxes change over time, becoming less elaborate. We have no information regarding dates for each version.

This game was republished by Miro Company►