This pack of seventy-two round playing cards shows the artist in top creative form. The imagery depicts plants and animals based on the study of nature, rather than copied from artists' model books as previous engravers of cards had done (e.g. Master of the Playing Cards). Flowers are shown in various stages of bloom. The name of the engraver is unknown but he is known today as the Master P.W. due to his monogram.

The inscription “Salve Felix Colonia” (Hail, happy Cologne) accompanied by three crowns of the Cologne coat of arms on the title card confirms that the cards were made in Cologne. There are fourteen cards per suit: King, Queen, Upper and Lower Valet (or Squire and Man-at-Arms) and ten numerals, with Latin inscriptions on the Ace in each suit. The Kings and Queens are lavishly dressed figures on horseback (or a donkey). The detail includes embroidered brocade material and elaborate jewel adornments on the headgear and edges of the gowns. Even the horses have decorative livery and are depicted in anatomical detail. There are no references to religion but only to social class, costumes and nature.

Above: Master PW Circular Playing Cards (1499-1515 approx. dates of activity). The five suits, rather than the customary four, are: Hares, Parrots, Carnations (or Pinks), Columbines (or Aquilegias) and Roses. The total number of cards is 72; diameter = 70 mms (outer borderline). All seventy-two of Master PW's designs have survived in from one to six impressions, but no single repository owns a complete deck. Copies are preserved at: Bologna (sixty-nine cards) and Dresden (fifty-two); the British Museum, London; Vienna; Cologne, Rothchild Collection, Paris; Amsterdam and Boston. The British Museum makes its collection database available to be used by scholars across the world.

These playing cards were copied by Teleman de Wesel, the Lower Rhenish engraver (in reverse) although the suit of roses as well as all of the tens from Master PW's series were eliminated and substituted by four new under-knaves. The cards were also copied by the Cologne engraver, Johann Bussemacher (Cologne 1591) and Jacob Binck. 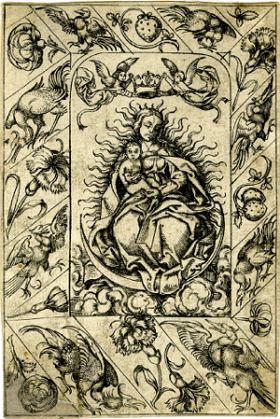 The engraving of lines in metal in order to print on paper developed from the goldsmith's long-established practice of decorating metal with engraved patterns. The technique was first used for printing on paper in the second quarter of the fifteenth century. It was considered the most noble and appropriate technique in which to render the work of great masters. Since none of Master PW's surviving cards are mounted on stiff card, the question arises whether they were actually intended for play. Although it is known that circular cards were used in India, the circular format was not the norm in the West. Of course, circular illustrations were known in the 15th & 16th centuries depicting occupations of the months and calendar illustrations. Likewise, naturalistic flowers, birds and animals occur in the borders of books of hours. We see here how the profane world of the medieval playing card had close connections with religious artwork.

“The extra card in which Death is clutching at a nude woman give these round cards the character of a series which was only intended for looking at. Having found pleasure in the sequence of roses, columbines, parrots, hares and pinks, having admired the ingenious arrangement of the flowers and animals and the quality of the draughtmanship, having smiled at the sometimes cranky kings, queens and knaves and having reflected on the slogans on the ace cards, one is reminded by the final card of the transitory nature of mortal beauty”  [quoted from Detlef Hoffmann, 1973].

People are still superstitious today, but in the past they were more so. Cards would play a part in how they made sense of the world in an era when there were so many unexplained mysteries. They are more than just a pack of cards, people could read into the symbols and inscriptions, draw analogies, make decisions or find meaning in everyday life. The inscriptions on the five Aces are as follows:

Above: in the rectangular version published by Lo Scarabeo, Turin, Italy (2004), the Aquilegia suit was omitted, the four Squires removed and two jokers added, so that modern games can be played.

A style of manuscript illumination during the high Gothic period, around the late 15th / early 16th century, involved decorating the margins with a luxurious array of strewn flowers, fruits, small animals and insects, painted in a naturalistic style on a gold background. In the example of a Missal shown below, the roundels in the borders also contain miniature illustrations of saints of the month, each accompanied by an appropriate symbol by which he may be recognised. 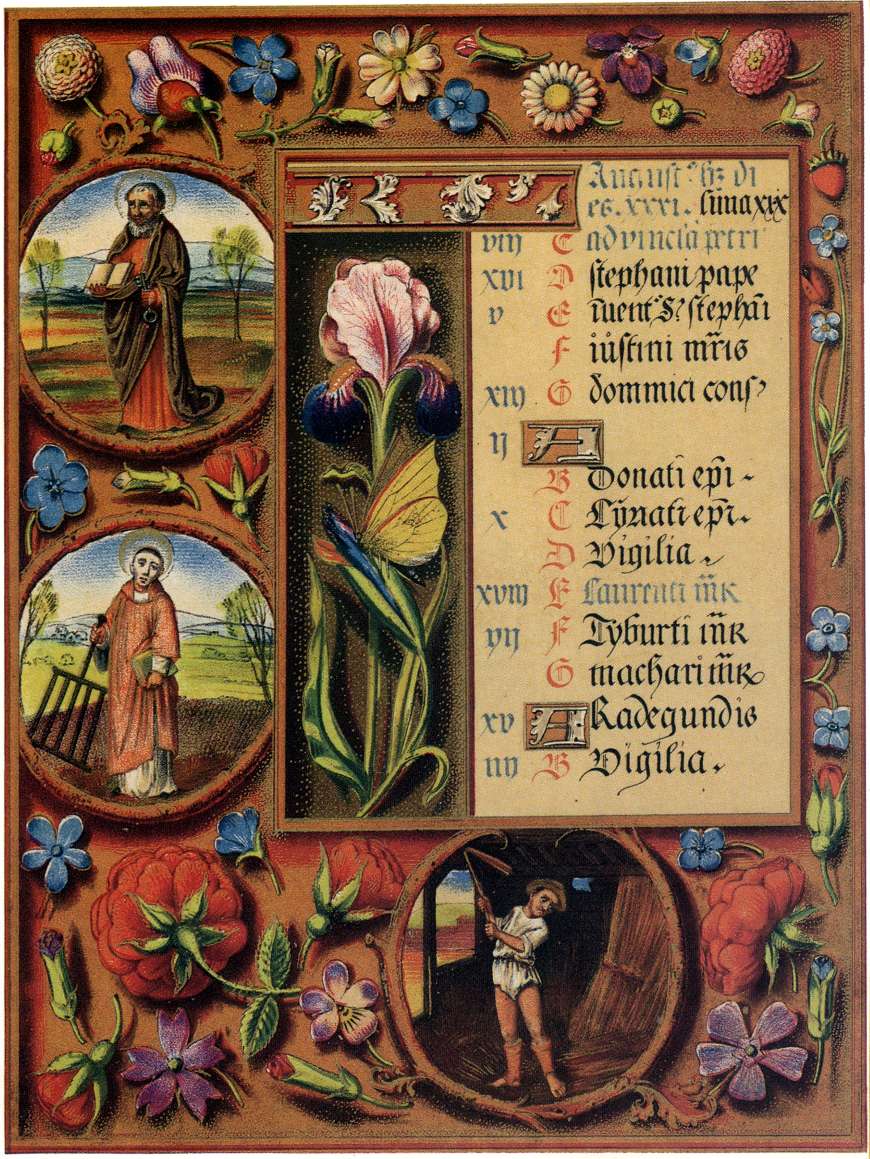 Above: Calendar page from an early sixteenth century missal, corresponding to the month of August, in the zodiac sign of Virgo, showing naturalistic strewn flowers in the borders, not unlike those used as suit symbols by the Master PW in his playing cards.