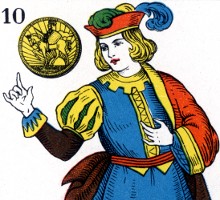 COPAG's Spanish-suited deck, based on the Catalan pattern, was created around 1940 and is still in production. Some editions are called “Sevilha Tipo Espanhol,” others “Baralho Espanhol,” in both cases alluding to Spain rather than Portugal. Where once Brazil followed the Portuguese pattern of cards, in the 20th century the Spanish pattern was preferred, as shown here. An edition probably destined for Spanish-speaking markets such as Chile is called “Naipes Español Copihue.” Copag's Ace of Coins has a design with a central medallion showing a mounted knight in armour, with caduceus and cornucopia in the background on a small plinth. 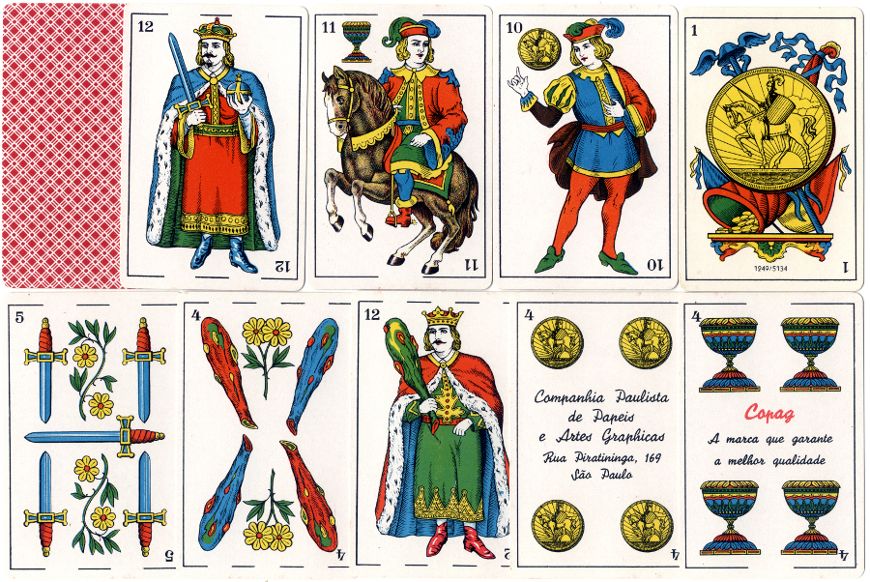 Above: box and four cards from “Naipes Español Copihue” 40-card Spanish-suited deck with a colour photograph of Chilean Huasos dancing on the box, probably for the Chilean market made by Cia Paulista de Papéis e Artes Gráficas, Rua Piratininga 169, São Paulo. All the inscriptions are in Spanish and the Copihue is the national flower of Chile. (Click to zoom).

In 1987 COPAG’s plant was moved to Manaus, in the Amazon region, a tax-free industrial district.