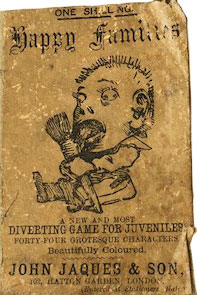 In 1851 the games manufacturer John Jaques of London (founded in 1795) commissioned a set of drawings from John Tenniel, later Sir John, the chief cartoonist of Punch, for their new game of Happy Families. The game was shown at the Great Exhibition of that year and was an instant success, rapidly superseding similar games such as John Bull in which players also collected sets of four cards. Jaques' version of Happy Families remained popular until the Second World War, but was lucky to survive thereafter. In 1941, during the Blitz, a large bomb destroyed the Hatton Garden factory. However, a safe, which had been kept at the top of the building and had fallen through to the basement, yielded the charred remains of an old pattern book, which included the originals for all the firm's card games and one example of the Happy Families card game - Master Potts the Painter's son. Later the printing plates for the game were discovered intact and so Happy Families lived on. 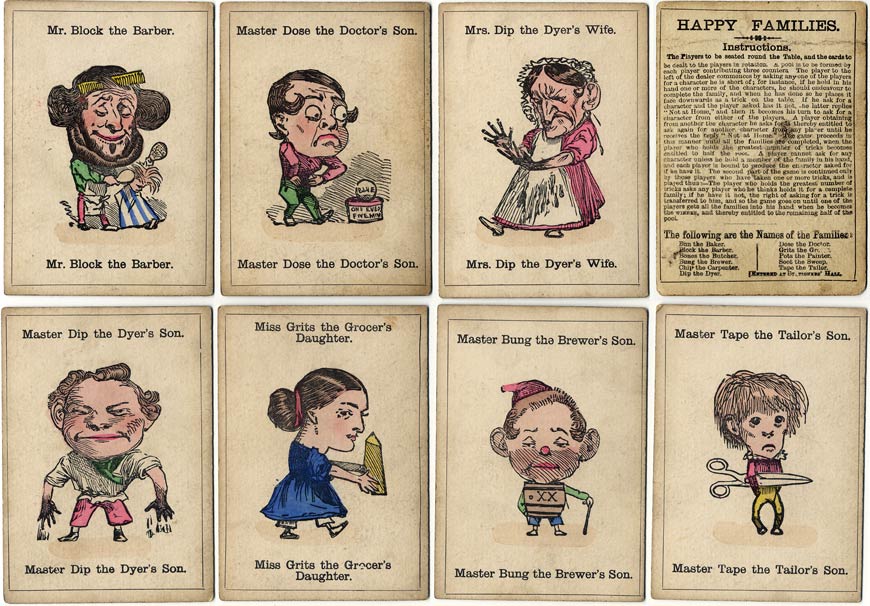 Above: cards from an 1880s edition of Happy Families published by John Jaques & Son, 102 Hatton Garden, London, which included 11 families of four members each. Stencil-coloured lithography. Jaques' Happy Families was originally published in 1851 and shown at the Great Exhibition of that year. It was an instant success, rapidly superseding similar games in which players collected sets of four cards, an idea possibly taken from early German models. Originally only eleven families, the game was expanded to twelve families by the addition of the Mug family, drawn by Miss Irene Dodson, the great niece of Charles Dodson (alias Lewis Caroll). This enabled the game to be produced in two half packs of six families each.

Tenniel's designs are an artisan crowd - even the doctor, the only professional among them, is reduced to 'Mr Dose'. They are also lower middle class and male orientated. Happy Families, which Tenniel drew 10 years before his illustrations for Alice in Wonderland, started a successful trend. Jaques was also one of the first games makers in England to market card games seriously. Jaques' original Happy Families designs were copied, sometimes with only slight modifications, by later manufacturers as recently as the 1970s, testifying to their enduring popularity. A miniature set was produced by Alfred Bird & Son in their custard powder packets just before WW2.

The above notes have been taken from the article "Happy Families... an old game with new faces" published in the Newsletter of the English Playing Card Society, edited by Major Donald Welsh, Vol.9 No.38, Nov.1992, pp.78-81. 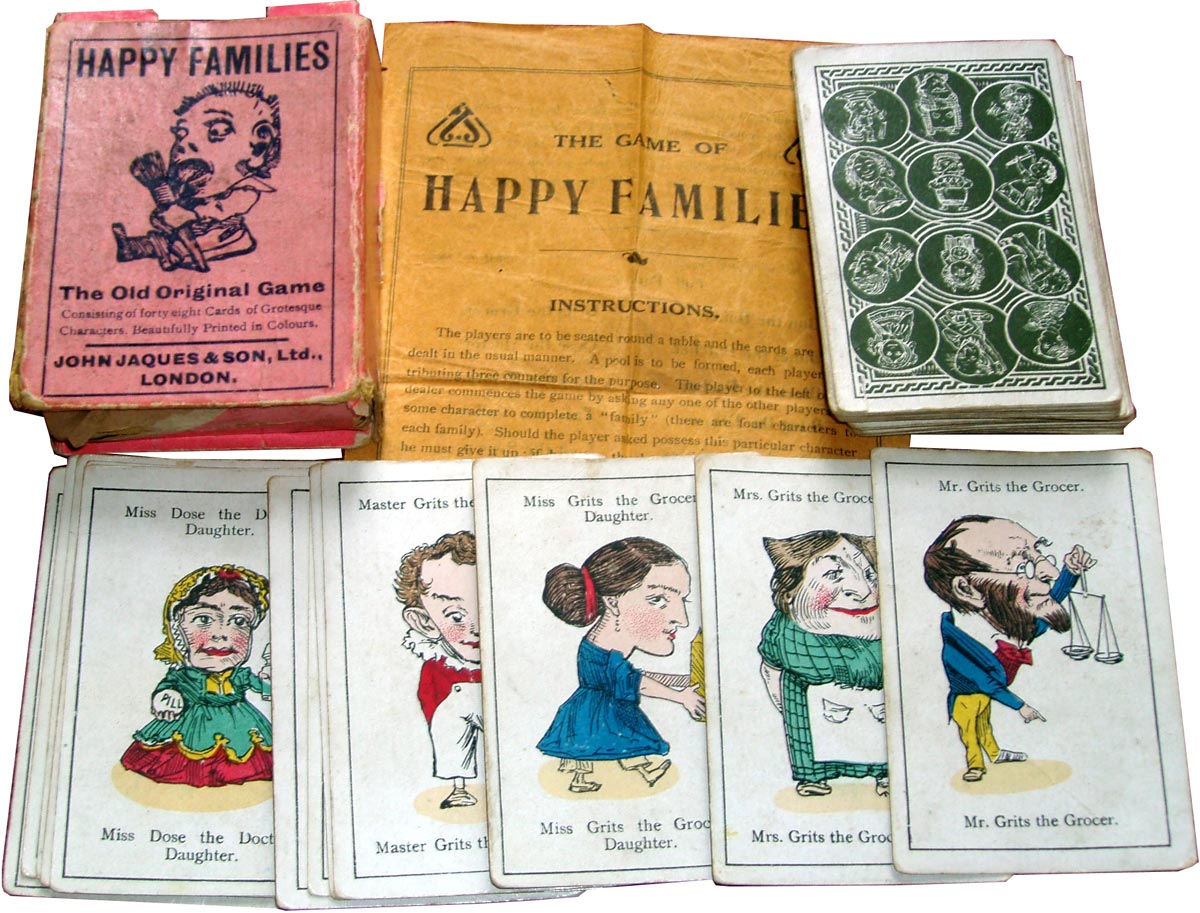 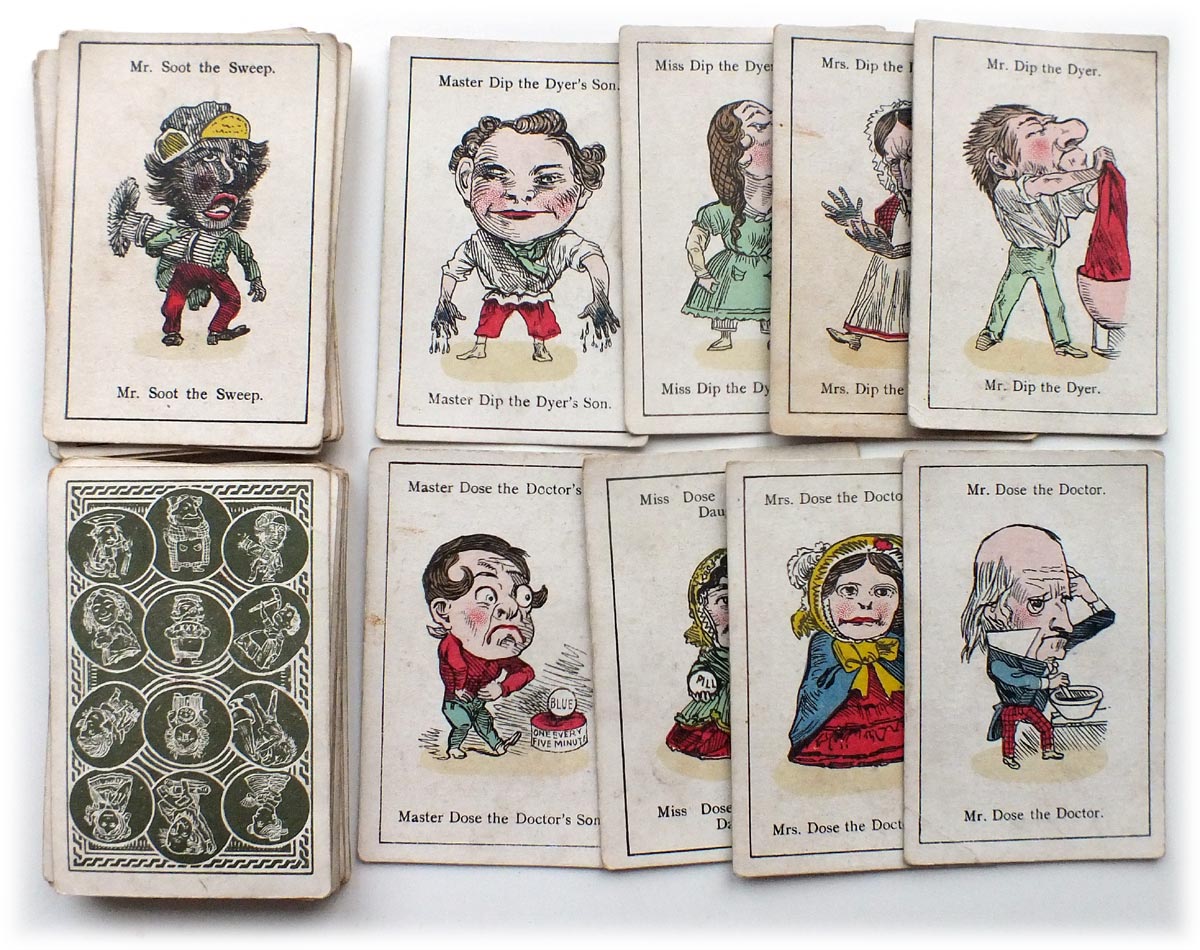