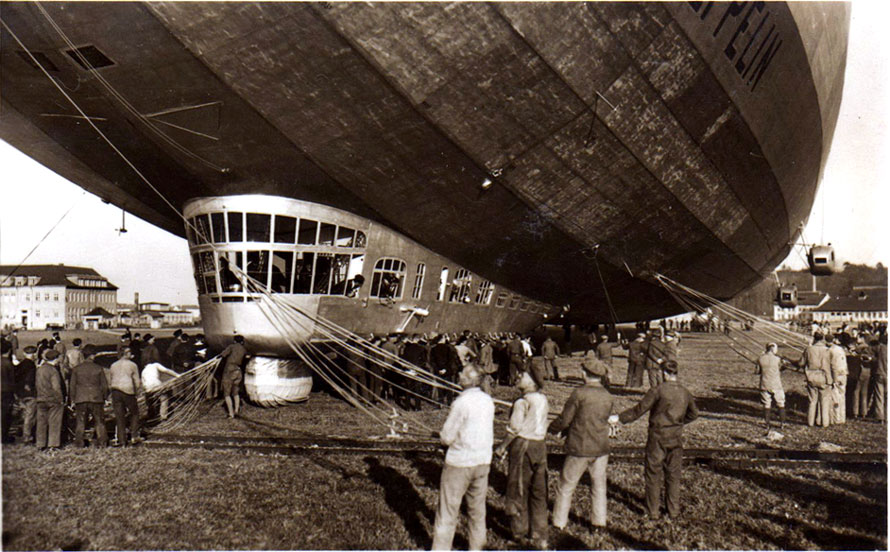 The first round the world flight was made by the Graf Zeppelin in 1929. The flight began at Lakehurst Naval Air Station in New Jersey in August. The airship carried correspondents from several countries and there was special souvenir mail which helped to pay for the cost of the trip. The first leg was across the Atlantic to Friedrichshafen to refuel for the next leg of nearly 7,300 miles over Russia and Siberia to Tokyo. Russia had asked that the Zeppelin fly over Moscow but the commander, Hugo Eckener, decided that the diversion from the northerly flight path would be too disruptive and refused. Five days were spent in Tokyo before the flight was resumed and the Pacific Ocean was crossed nonstop, a distance of almost 6,000 miles, and landed at Los Angeles. With nearly another 3,000 miles to go the airship crossed the USA back to Lakehurst again. The whole flight including the time spent at stops took 21 days 5 hours and the distance covered was 20,651 miles. The Zeppelin did visit Moscow in a special flight in 1930 to pick up and deliver special mail. It was greeted by a crowd of 100,000 people.

The card game commemorating these events was published by J.W. Spear & Söhne, Nuremberg, and edited by Max Geisenheyner in 1930.

Above: the Graf Zeppelin deck plan, showing the control area and radio room through to the ladies and gents toilets. The inside accommodation is pictured in the 'M' series cards in the game.