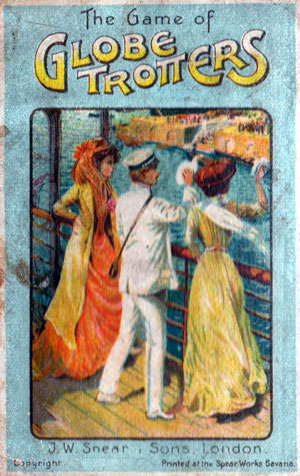 Globe Trotters follows the journey of a group of travellers who depart from Genoa by ocean liner and sail to the Orient for the ultimate travel experience. They visit Egypt, pass through the Suez canal, cross the Indian ocean and arrive in India - ‘the land of wonders’ - where they see the ancient buildings. They call at various ports among which are Calcutta and Hong Kong. In Japan they ride in little carts drawn by runners. After this they sail to America - ‘the land of unlimited possibilities’ - and view the imposing natural scenery and the Liberty Statue. Finally they return to Europe.

The pack contains 60 cards beautifully illustrated and printed by chromo-lithography, and the rules of the game are that the winner is the one who succeeds in getting the most complete quartetts.