TODAY nothing remains of Charles Goodall’s Camden Works, where three-quarters of the playing cards printed in Britain were produced. However, the court card faces (show below) have become household figures around the world. 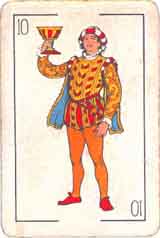 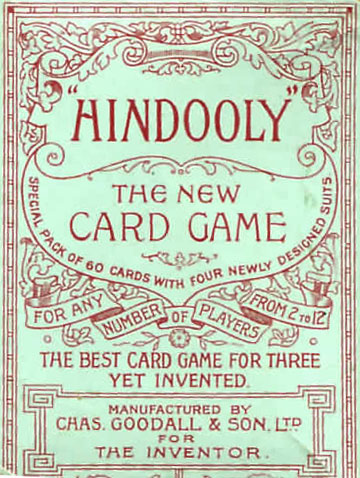 Above: The Goodall dynasty, from left, Charles, Josiah and Montague Goodall.

As a child, the founder of the dynasty, Charles Goodall (1785-1851), came to London from Northampton, and was apprenticed to John William Hunt, head of the old and established playing card manufacturer Hunt & Sons, in 1801. He seems to have remained in their employ until 1820.

The Goodall business was first established in Soho in 1820, printing playing cards and message cards. The earliest cards were traditional in appearance, and resemble those of Hunt. In 1826 increasing business and a growing family necessitated a move to larger premises, and then again, during the 1830s, the firm expanded into premises in what was then Great College Street. The main factory lay behind the terrace in a building which had formerly been a gun factory and was later used for the production of steam engines. At around this time Goodall started experimenting with 'modernised' and other court card designs which gradually evolved into those we are familiar with today.

Charles’ two sons joined the family firm. By the middle of the century, Goodall and its younger competitor Thomas De La Rue were between them producing two-thirds of all playing cards made in England. Fifty years later Goodall and Son were leading the market with annual production of over 2 million packs. Demand was outstripping production and additional premises were secured nearby in 1855. The reduction of tax on playing cards in 1862 from one shilling to three pence boosted the playing card industry to almost treble the output. By 1868 an additional range of high-quality stationery was launched, plus games, toys, fountain pens and even toilet paper. Goodall's card games were never as successful as De la Rue's range of card games. Corner indices on playing cards were introduced in 1874 under the registered name “Duplex”. New presses in 1879 enabled Goodall to diversify into multi-coloured calendars, Christmas and New Year greetings cards and almanacs. Over the following twenty-five to thirty years they produced a substantial range of ornate and colourful cards, mainly by chromolithography. 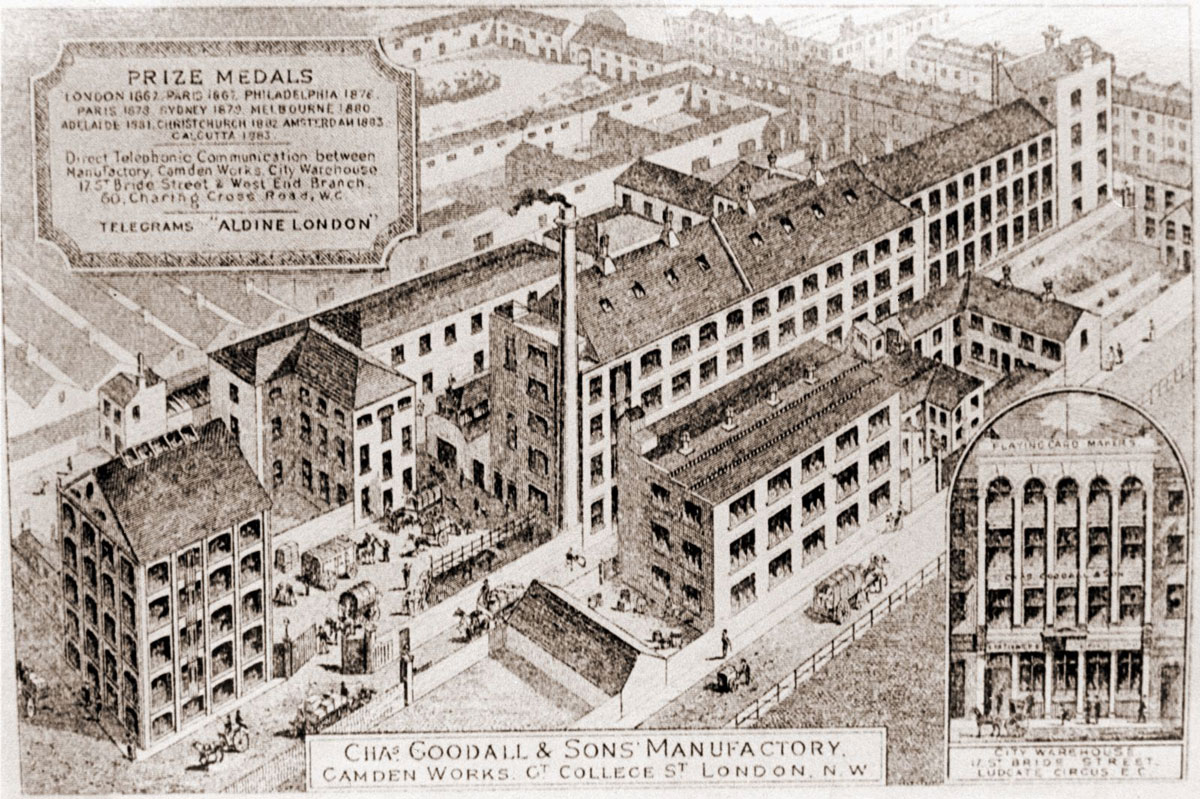 Above: The Camden Works at its 1000-employee prime, producing over 2 million packs of playing cards annually.
The reduction of tax on playing cards in 1862 gave an immense stimulus to sales.

Over the years, because of its clarity and beauty of design, Goodall's distinctive court card pattern has been adopted or copied around the world. 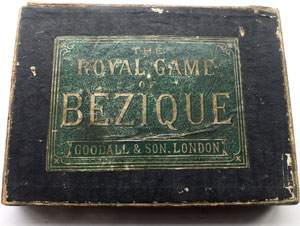 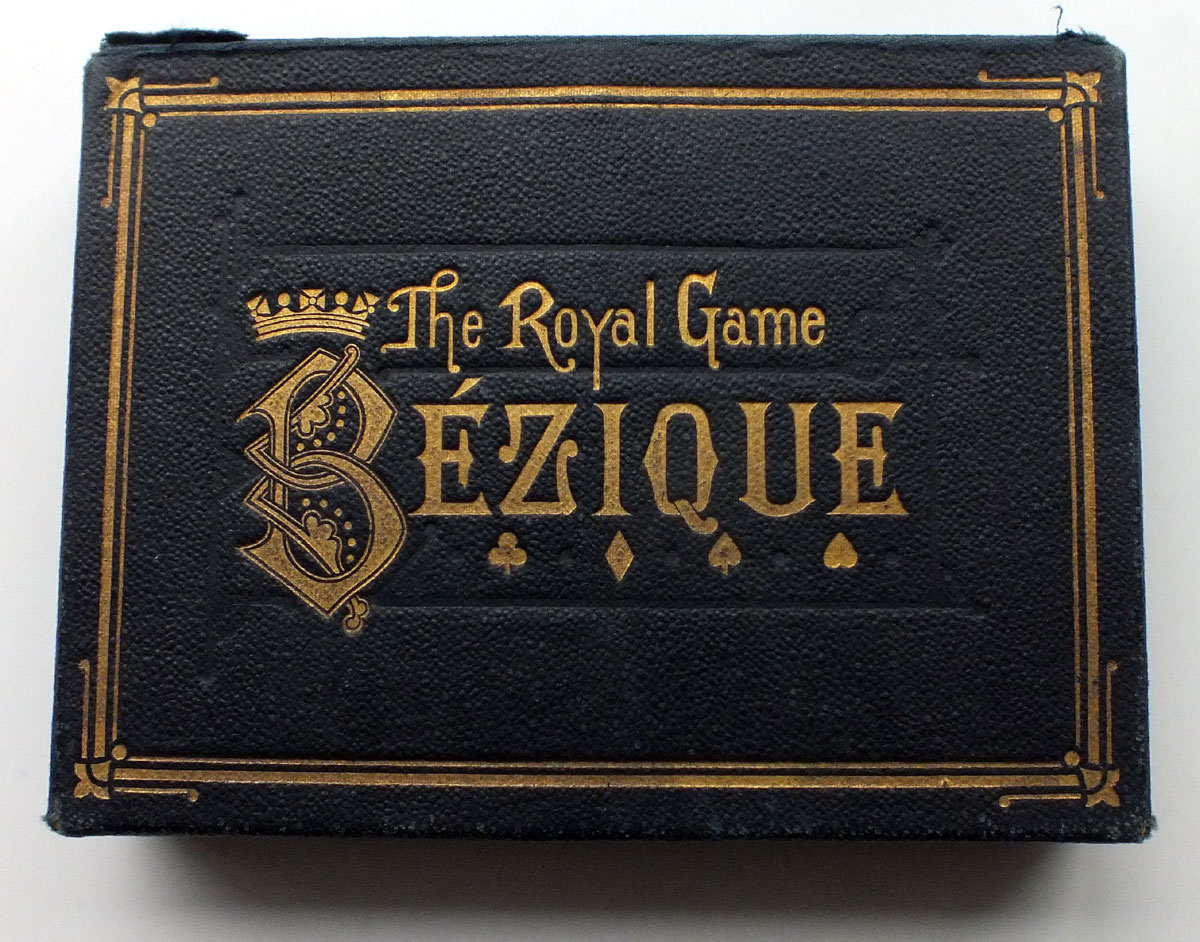 In the early 1880s Goodall absorbed the firm of Reynolds & Co., acquiring their stock and equipment. Goodall made cards for Victor Mauger in the USA, and the designs were copied by other American manufacturers. A range of accessories for card players started appearing from about 1860 including whist markers, Bézique sets, cribbage boards, score cards, etc. Goodall also produced decks with court cards embellished with ornamental patterns, printed in red & black only with a simple back design, to be sold at cheaper prices. In around 1885 Goodall set up LONDON PLAYING CARD CO., a subsidiary outlet for lower grade cards which deterred competitors from entering the market. Goodall's “Colonials” were introduced into their range during the 1890s as a special cheap series for export. They came in tuck boxes with one Joker.   See also: Tom Thumb Miniature playing cards :: Elfin Miniature playing cards :: Japanesque playing cards :: Pashas :: Prize Medal W.H. Smith :: Prize Medal J.R. Freeman & Son :: Sultan playing cards :: Goodall Patience Boxes :: Kuhn Khan

Above: early Jokers manufactured by Charles Goodall & Son during the 1870s-1890s. The first three were produced for the American market   learn more →

Until 1862 the ‘Old Frizzle’ Ace was used. After this date the Ace of Spades became a sort of trademark, providing useful clues for dating. In 1897 the company became a ‘limited’ one, and this change was reflected in the lettering on the Ace of Spades see more → 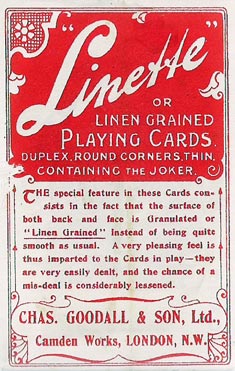 In 1906 linen grained cards were introduced under the trade name “Linette” with the wrapper announcing the “Duplex” corner indices which had been registered in 1874 and the Joker. They soon became popular for their good shuffling and dealing qualities and the brand was continued for many years in standard and narrow sizes, and with “Japanese Lacquer” back designs.

“Boudoir” playing cards were also introduced in 1906 in a new, slimmer size, measuring only 90x57 mms instead of 90x63mms. Around the same time the “Salon” brand was introduced with tasteful pictorial backs and gilt edges for the Canadian market, but also for sale in Britain, price 3/- per pack. 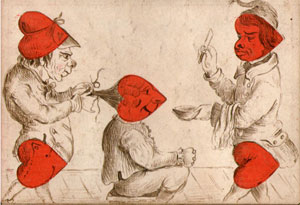 Above: transformed playing cards on a pack by Goodall & Son, c.1870.

Back Designs and Decoration

From 1820 to c.1840 Goodall cards had plain white backs. Gradually the backs became decorated. To begin with single-colour designs were produced using stars, dots, fleur-de-lys etc. In about 1850 the first pictorial backs appeared with designs of flowers, shells or seaweed in monochrome printing on a pale background. The 1860s saw the introduction of multicoloured designs, with commemorative backs first appearing in 1864 to celebrate Shakespeare's 300th anniversary and the Wedding of the Prince of Wales. Cards produced to special order featuring badges or crests of army regiments or naval establishments started appearing in the 1870s. The range of designs increased enormously in the 1880s and 1890s and some pictorial back designs were very elaborate with printing in up to 12 separate colours. An Historic pack and Historic Shakespeare were published in 1893 featuring English Historical and Shakespearean characters, with decorated Aces. Japanesque playing cards appeared in c.1902, and a series of Canadian Pictorial Souvenir Cards was published between c.1905-21 with different back designs and photographs of scenery on each card.

Above: various commemorative, pictorial and decorative back designs from playing cards by Chas Goodall & Son spanning the Victorian era to early 20th century.

Advertising back designs started appearing towards the end of the nineteenth century and were first mentioned in Goodall's advertisements in the 1880s. They rapidly became very popular and by 1890 were being produced in large quantities. Shipping companies, whisky distillers, breweries and tobacco companies were the main advertisers, often with a new design each year. Queen Victoria's Diamond Jubilee and the beginning of a new century coincided with a spate of beautifully printed commemorative packs and elaborate back designs.

Above: advertising back designs from playing cards by Chas Goodall & Son.

Above: The Rameses Fortune Telling Cards were manufactured by Chas. Goodall & Son Ltd, London, c.1910. They are presented in a mock snakeskin box. Left: back design showing an Egyptian scene. Jack of Hearts: "Your dearest friend (pay attention to the cards nearest)" Reverse: "A pleasure loving bachelor; a fickle lover". The pack comprises an ordinary pack of 52 cards, plus one Joker or 'Subject' card, with interpretations printed at the top and foot of each card   (click image to see more).

With World War I the business climate deteriorated and since no successors were suitably qualified in 1922 Charles Goodall and Son was merged with De La Rue. The Camden Works were kept open until around 1929 and the Goodall name and brand names were still used until much later. After the merger identical packs were sold apparently haphazardly under the De la Rue and Goodall names, with De la Rue and Goodall Aces of Spades and Jokers used indiscriminately. In the end the old buildings became run-down, were purchased by The Post Office and partially demolished in the mid 1970s.

Acknowledgement:   Historical information about Goodall and Son has been very kindly supplied by Michael H Goodall, Charles Goodall’s great-great-grandson. Mr Goodall is writing a full history of the company and its products, and would be delighted to hear from any former employees and others who may have memories of Camden Works or possess any unusual items manufactured by Goodall. 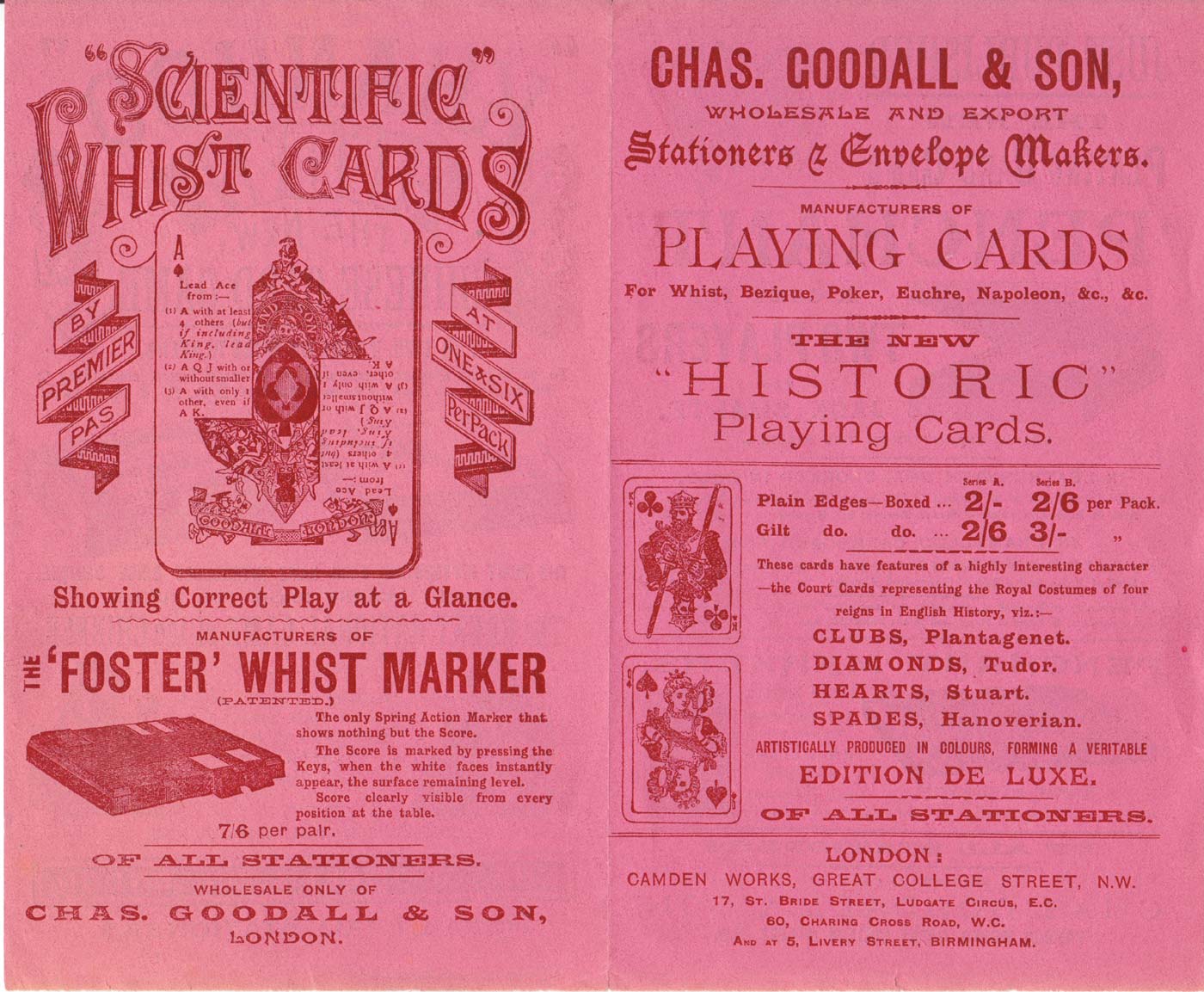