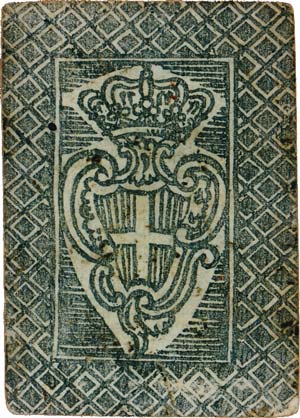 Above: a unique, complete set of 40 playing cards printed during the reign of Grandmaster de Rohan (1775-1797), stencil-coloured in yellow, red, then green. The four Kings are seated on thrones and have Maltese crosses of the Order of St John on their breasts. The Four of Coins is stamped with the coat-of-arms of the grandmaster. The verso of the cards shows the Order's escutcheon. The cards were made into pasteboard and the back paper is folded round to form a border around the front. Cards measure 85x60mm.

The so-called ‘Dragon Cards’, with winged monsters on the four Aces, are a colourful and somewhat enigmatic aspect of early playing card history. The earliest known examples are Spanish from about 1550 and the latest surviving descendents can be seen in Japanese mekuri cards today. At various times cards of this type have appeared in Italy, Portugal, Malta and elsewhere in Europe, and their influence has been noted in cards from Japan, Brazil, India and Indonesia. Cards of this type were also discovered in archaeological digs in Peru, having been taken there by Spaniards.

The inscriptions at the tops and bottoms of the cards shown here suggest an Italian model (rather than Spanish) and the cards closely resemble late seventeenth century Italian cards known as ‘Infirrera’ cards, after the name of the maker. Earlier examples of similar cards also found in Malta suggest that they were being printed and assembled in Malta since the seventeenth century. The Kings have Maltese crosses of the Order of St John on their breasts which is curious since any form of gambling was not permitted in the Order. However, the Four of Coins is stamped with the coat-of-arms of the grandmaster which could indicate his approval.