... the ‘wild-card’, the card of opportunity

The extra “Joker” card is believed to have been invented by American Euchre players who, when modifying the rules sometime during the 1860s, decided that an extra trump card was required. Originally he was called “The Best Bower” and then later “The Little Joker” or “The Jolly Joker”. It was around this time that other innovations and improvements started to appear, such as rounded corners replacing square and various types of corner indices.

These Jokers, or extra cards, were first introduced into American packs around 1863, but took a little longer to reach English packs, in around 1880. One British manufacturer (Chas Goodall) was manufacturing packs with Jokers for the American market in the 1870s. 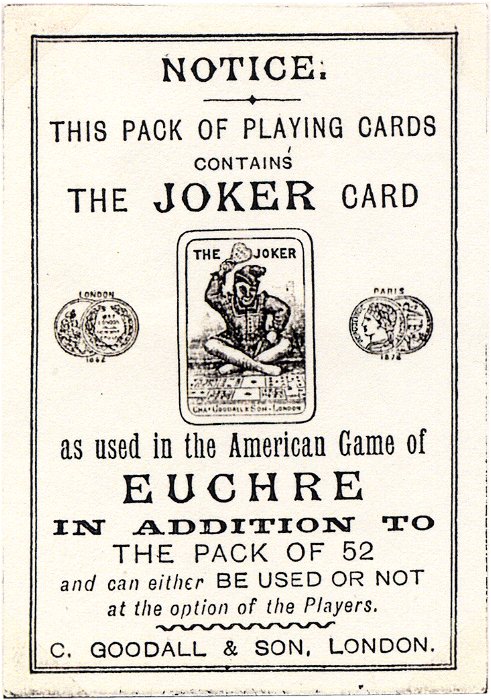 Above: early 'Bower' cards and Jokers by American manufacturers produced during the 1870s-1880s. Many of the images resemble clowns or jesters, not always ‘Jolly’; sometimes they appear slightly sinsiter!

The Joker card is capable of almost anything or almost nothing, depending on the rules of the game. It has been suggested (Dianne Longley, 1999) that “the Joker is the ‘wild-card’, or the card of opportunity, not unlike the ethos of opportunity and individuality that has been the driving force behind America's pursuit of greatness.”   Some historians have seen the Joker as a descendant of the Fool of Italian tarot cards, and in some 19th century tarot sets the Fool was depicted as a harlequin or buffoon.

Some early Jokers were specially designed, along with special Aces of Spades, as part of the company’s brand identity. Hence they can also be an aid in identification. Many collectors are primarily interested in certain cards such as Aces of Spades, Jokers, court cards, unique backs, etc., and hence the Joker card has also become a collector's item in it’s own right... 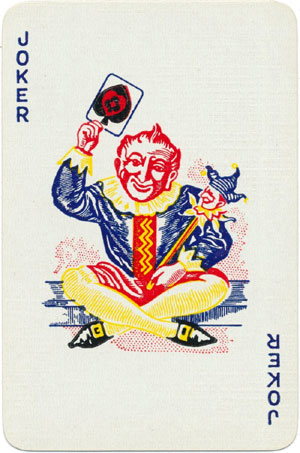 To see a further selection of Jokers, please click here   →.