There's a wealth of information there, so I thought I'd simply add illustrations of the cards themselves and say something about the models they were taken from.

What early 19th century Australian playing cards were like is anybody's guess, though any that there were were probably taken out from England for the most part. Van Genechten supplied cards for Australia, as can be seen from the rip-off Bancks-like AS of c.1880. 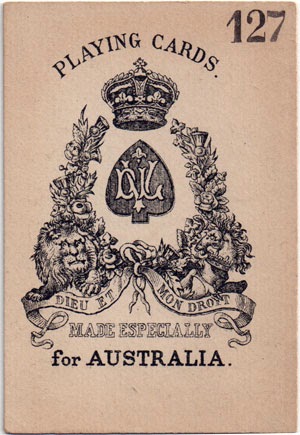 What the courts were like is difficult to say; some of the courts illustrated on page 25 would be possibles. Most of the early makers used copies of other makers' courts, mostly American or British. One of the earliest makers, Troedel & Co., used De La Rue's courts as a model in the mid-1880s. 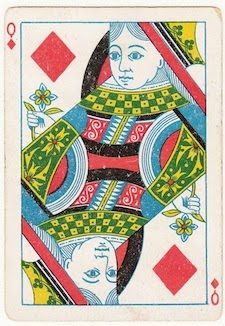 Above: Troedel copy of D6 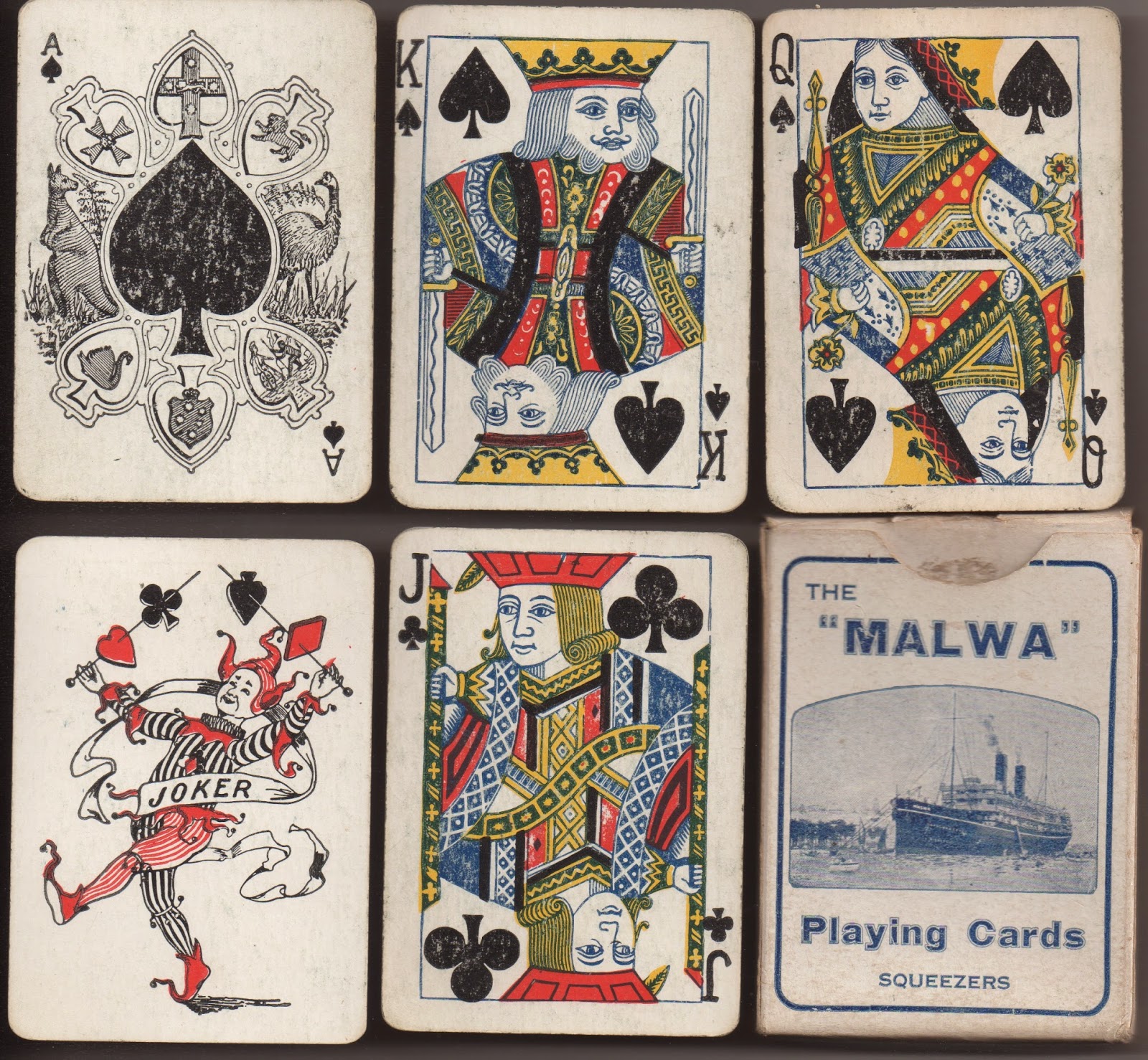 The NYCCC originals are reproduced below. 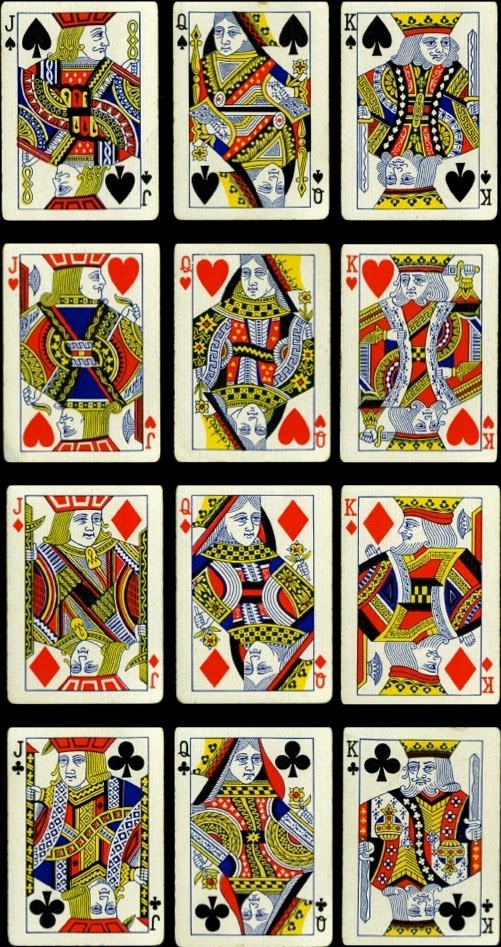 Thomas became W. Detmold & Co. in c.1907 and changed their court design to one that resembles a USPCC wide, unturned design US3. These were produced in both two and four colours. 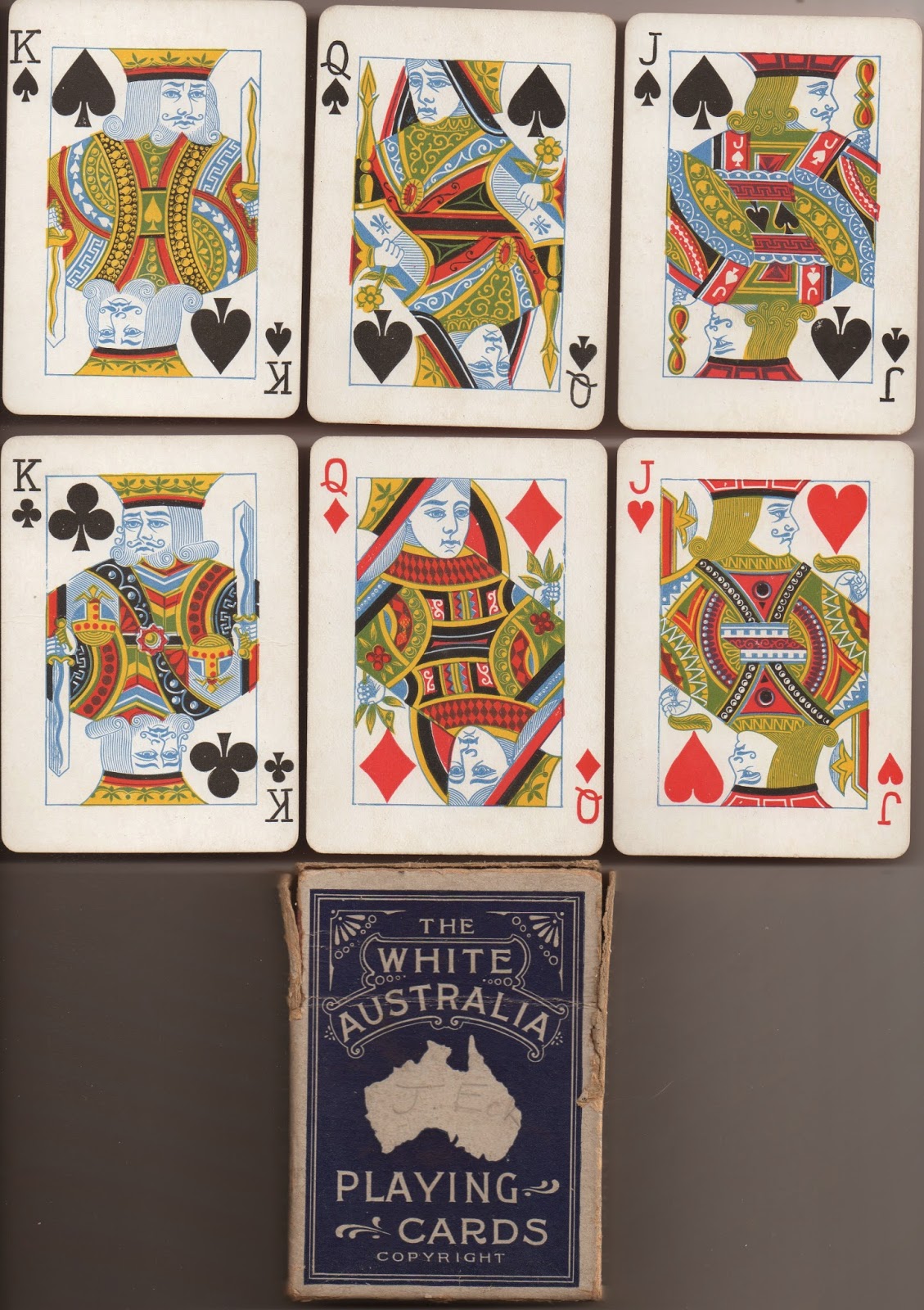 Above: The somewhat dubious sounding White Australia pack by Detmold. 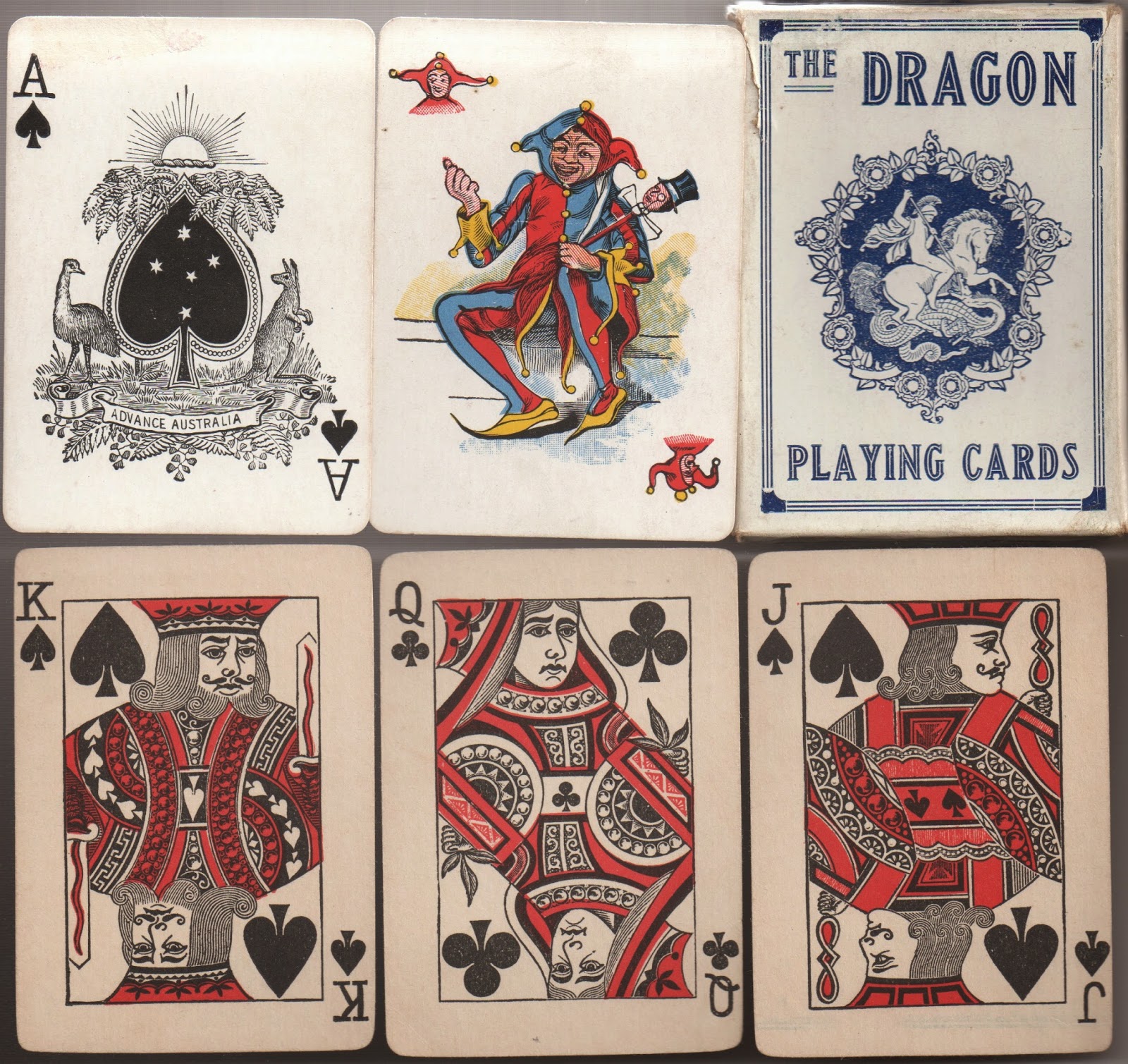 The original US3 is illustrated below. 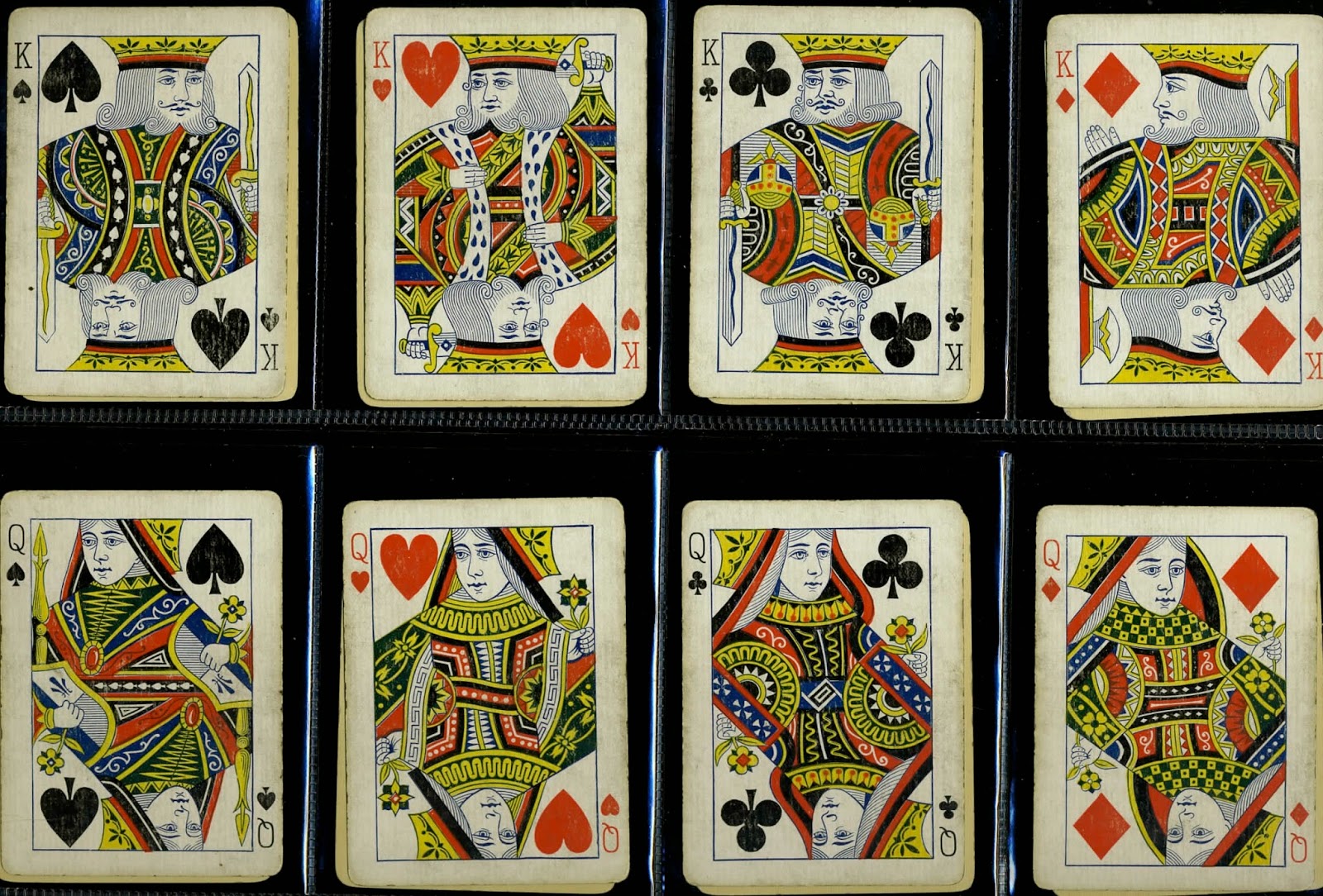 There is also a bridge-width version of the Detmold courts. 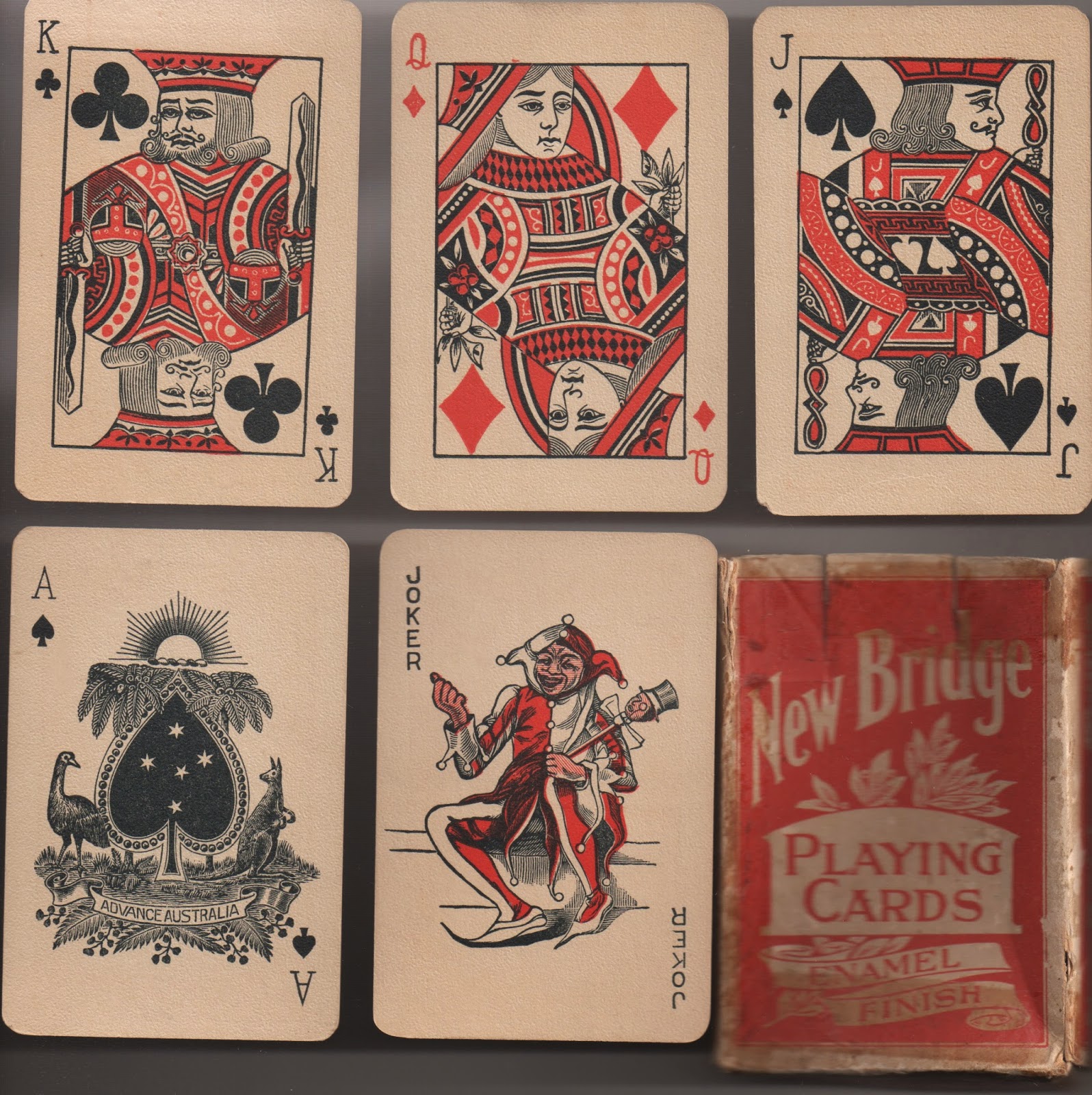 In c.1922 Detmold became Spicer & Detmold and the courts were revised with six courts turned. These are found in bridge packs in two and four colours. 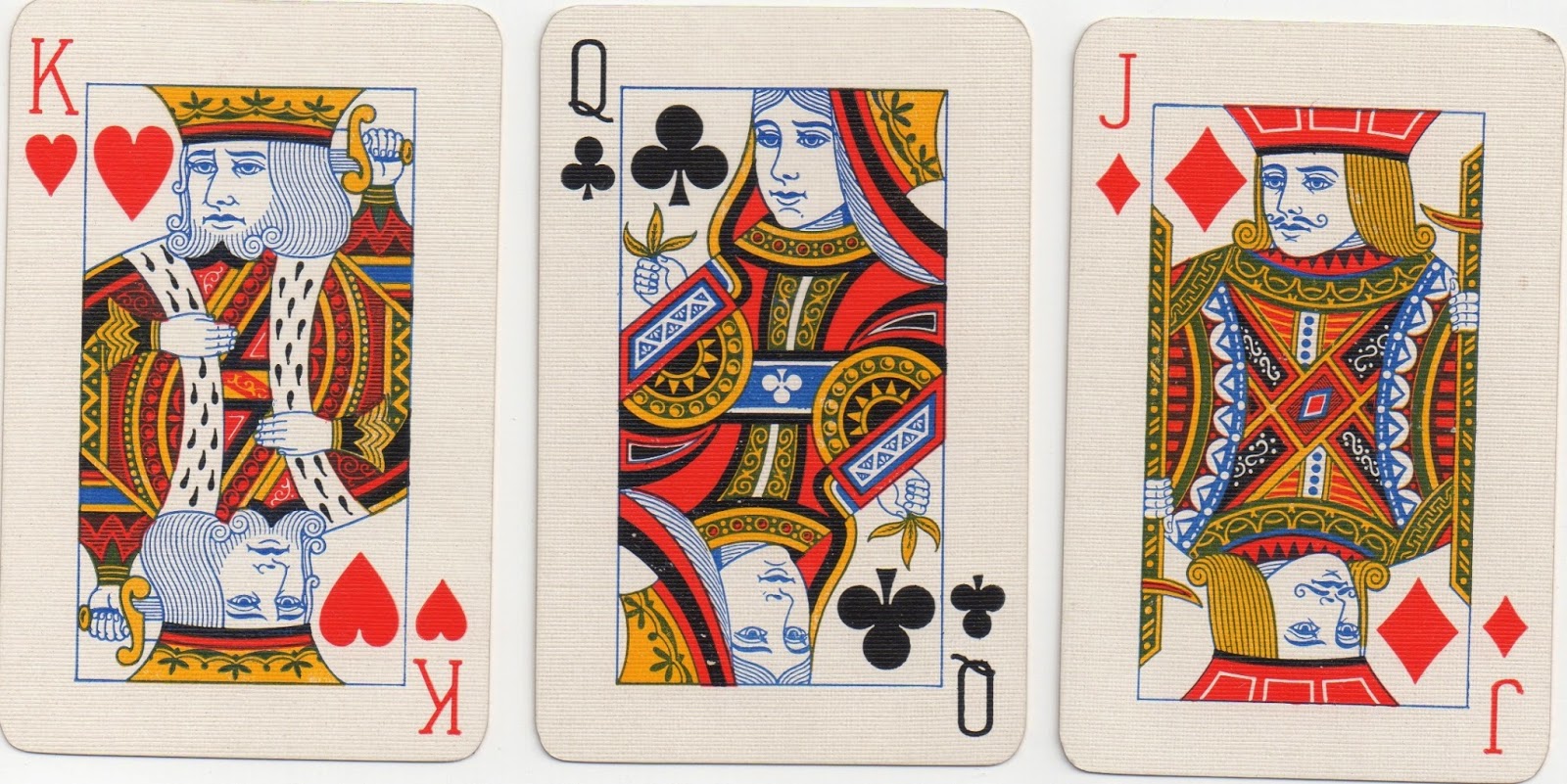 These courts were used up until the end of Spicer's as a card-maker, surviving a series of take-overs and changes. 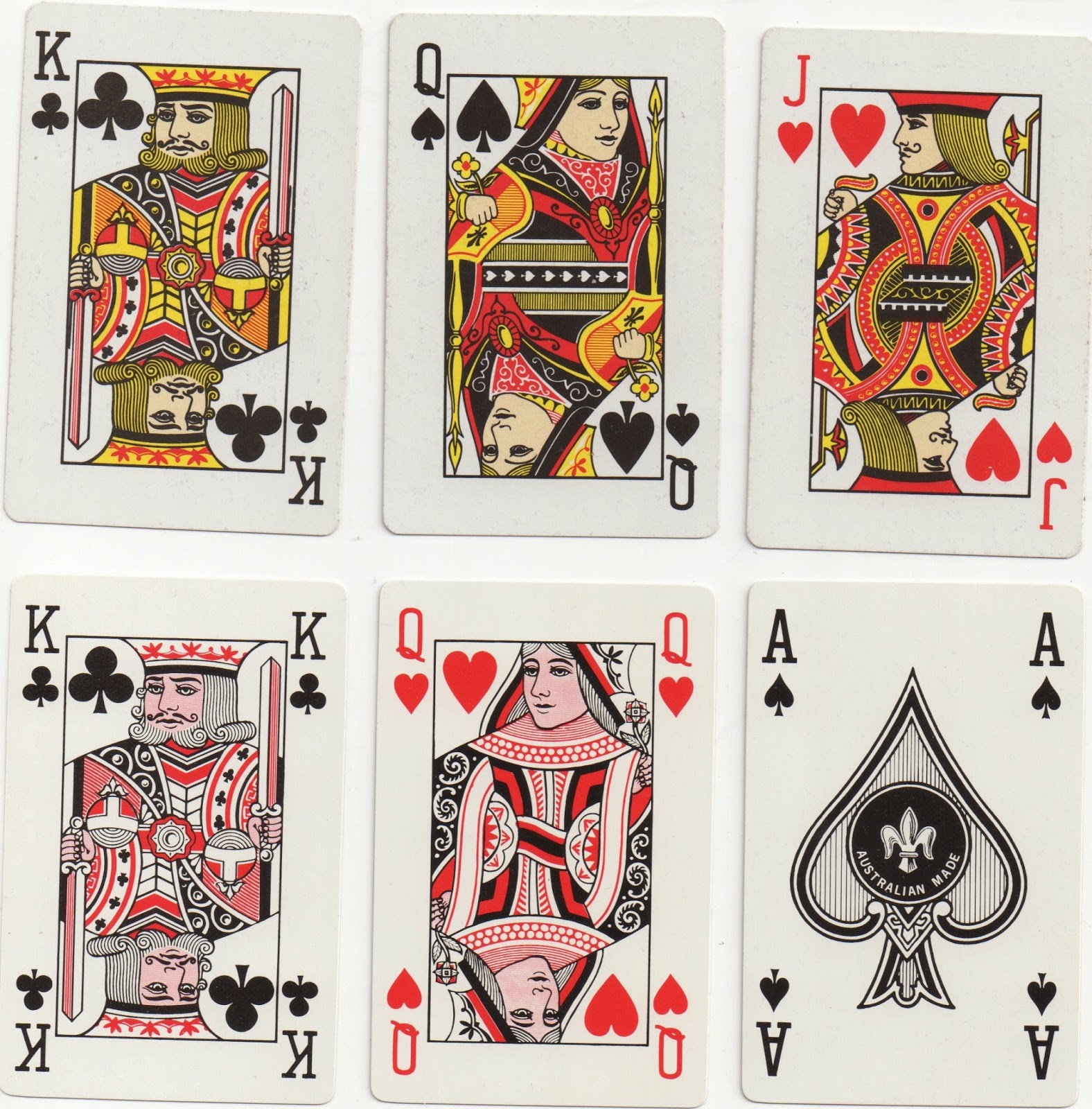 Above: Later versions in three and two colours with the Reed's AS, 1980s 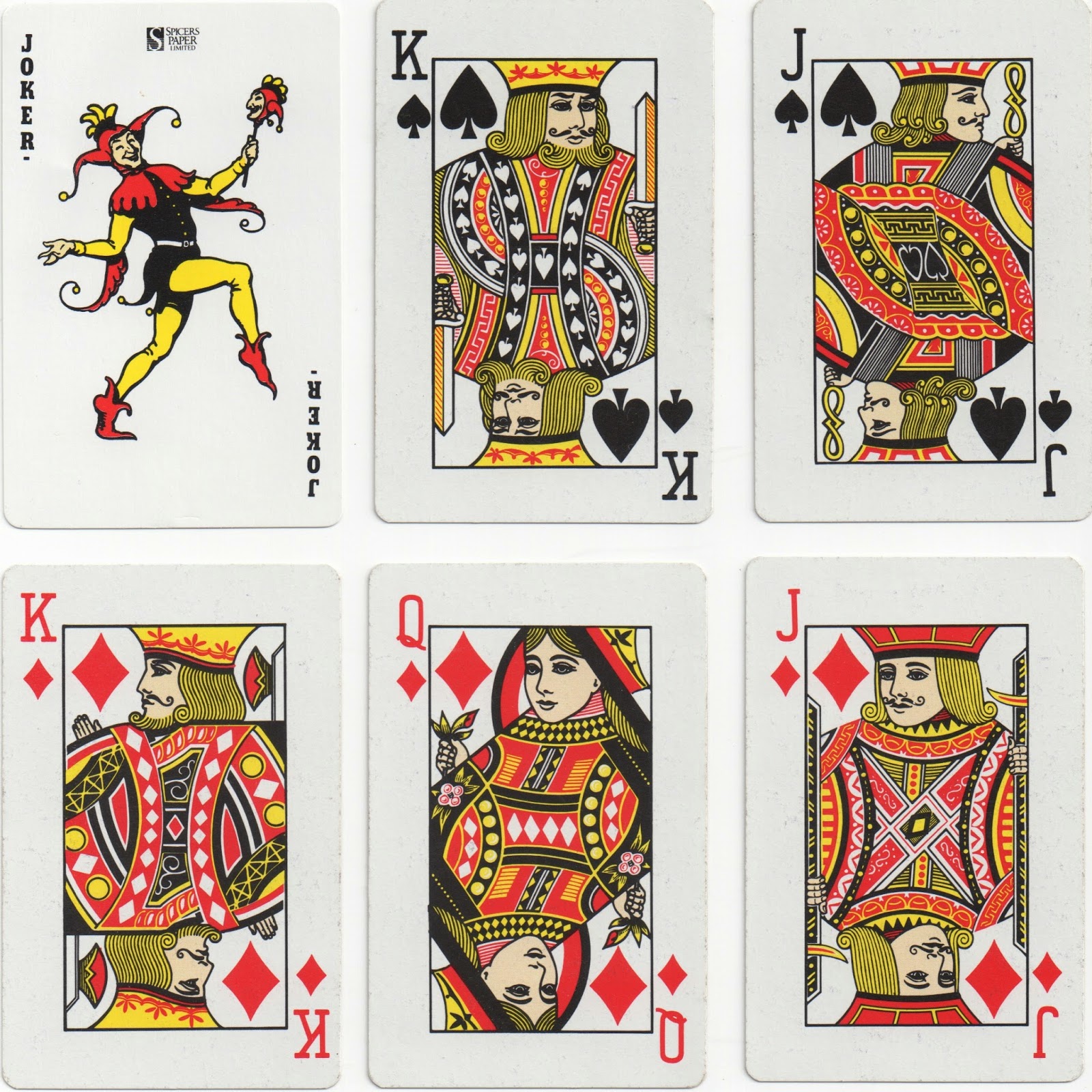 Sands & McDougall used a design that was idiosyncratic after it stopped using the ex-US6 design shown above. 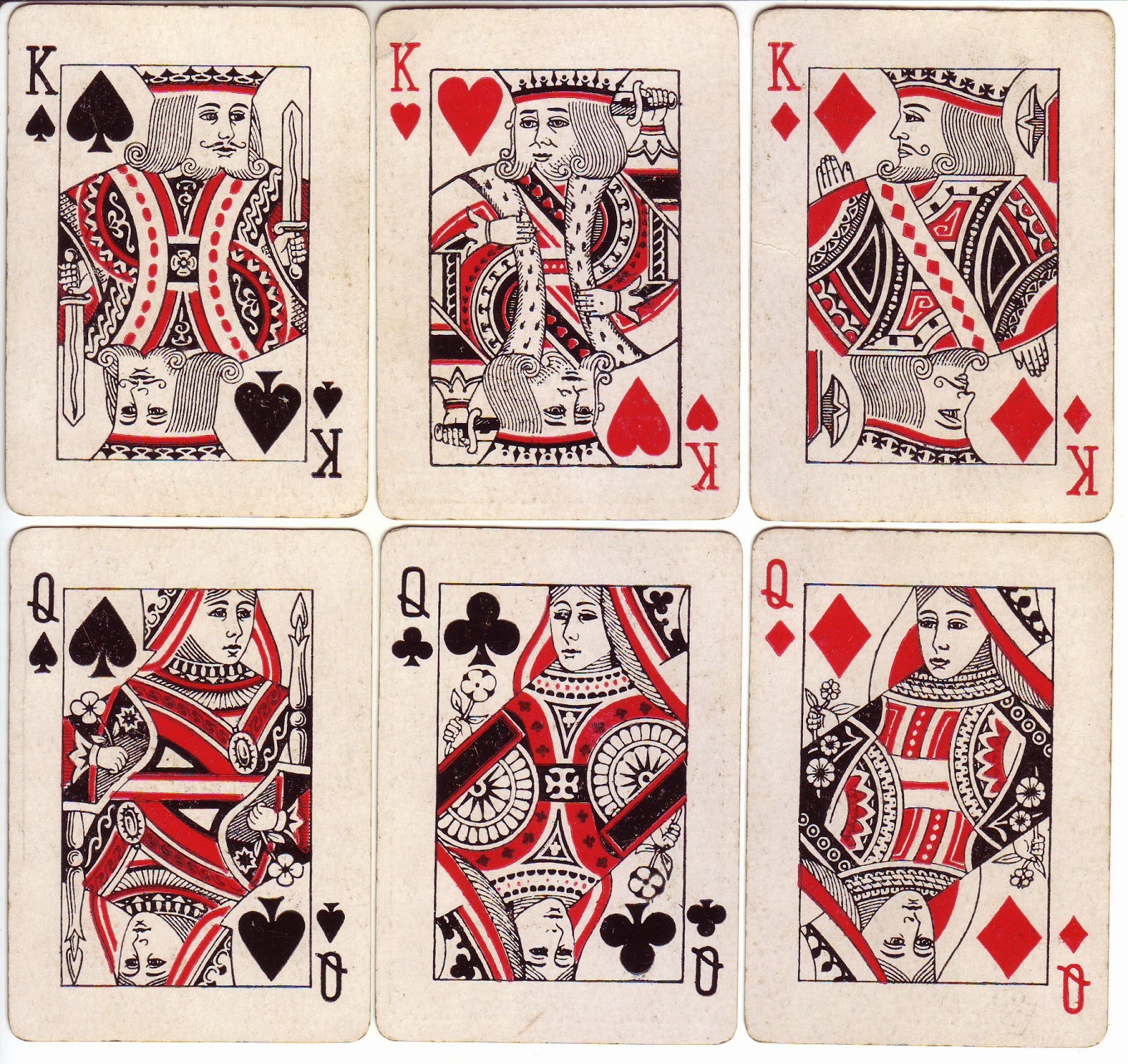 The courts changed again with the introduction of bridge-size cards in the 1930s. Interestingly, the design is similar to that of the Canadian PCCo., US2.1. 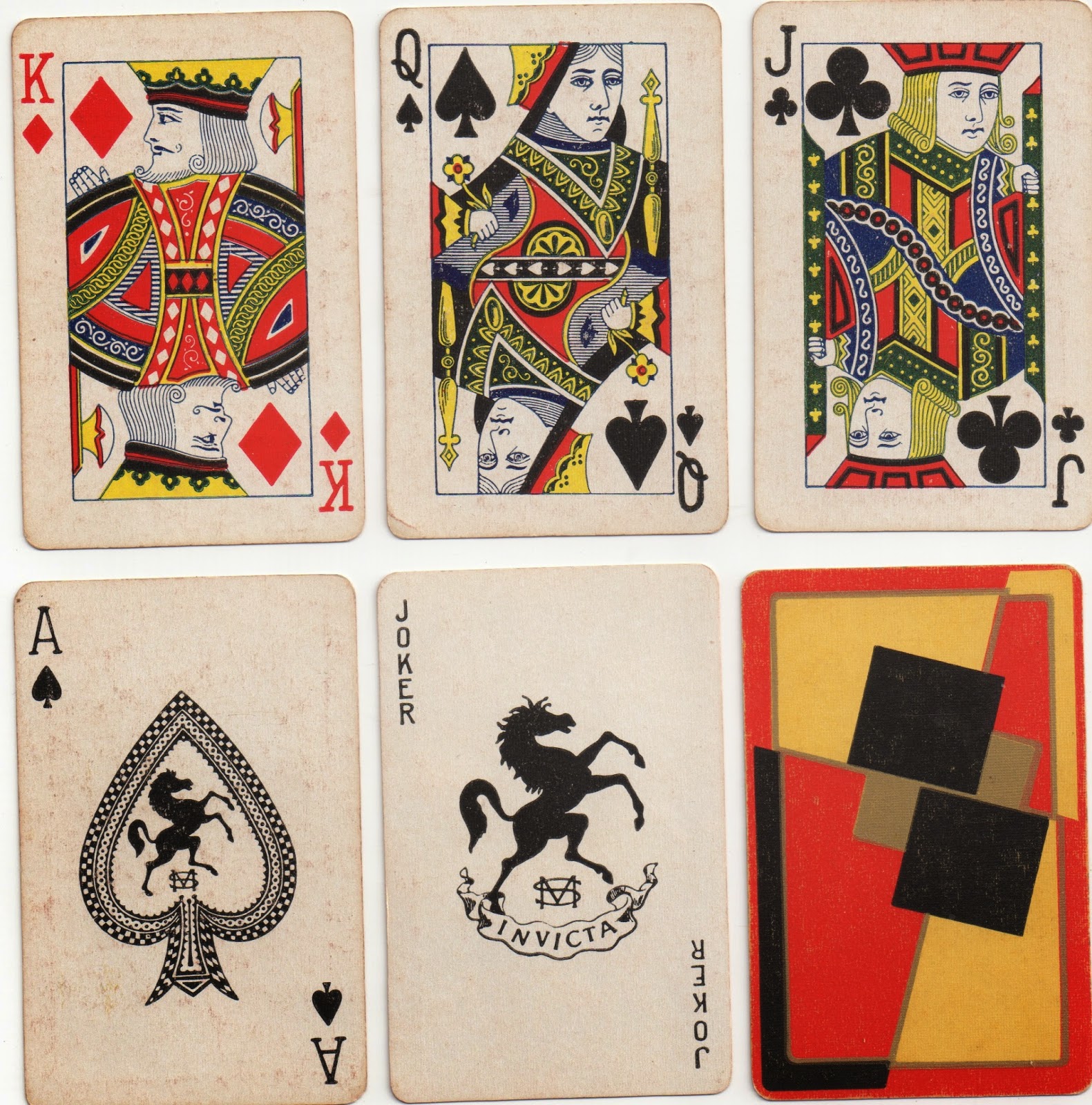 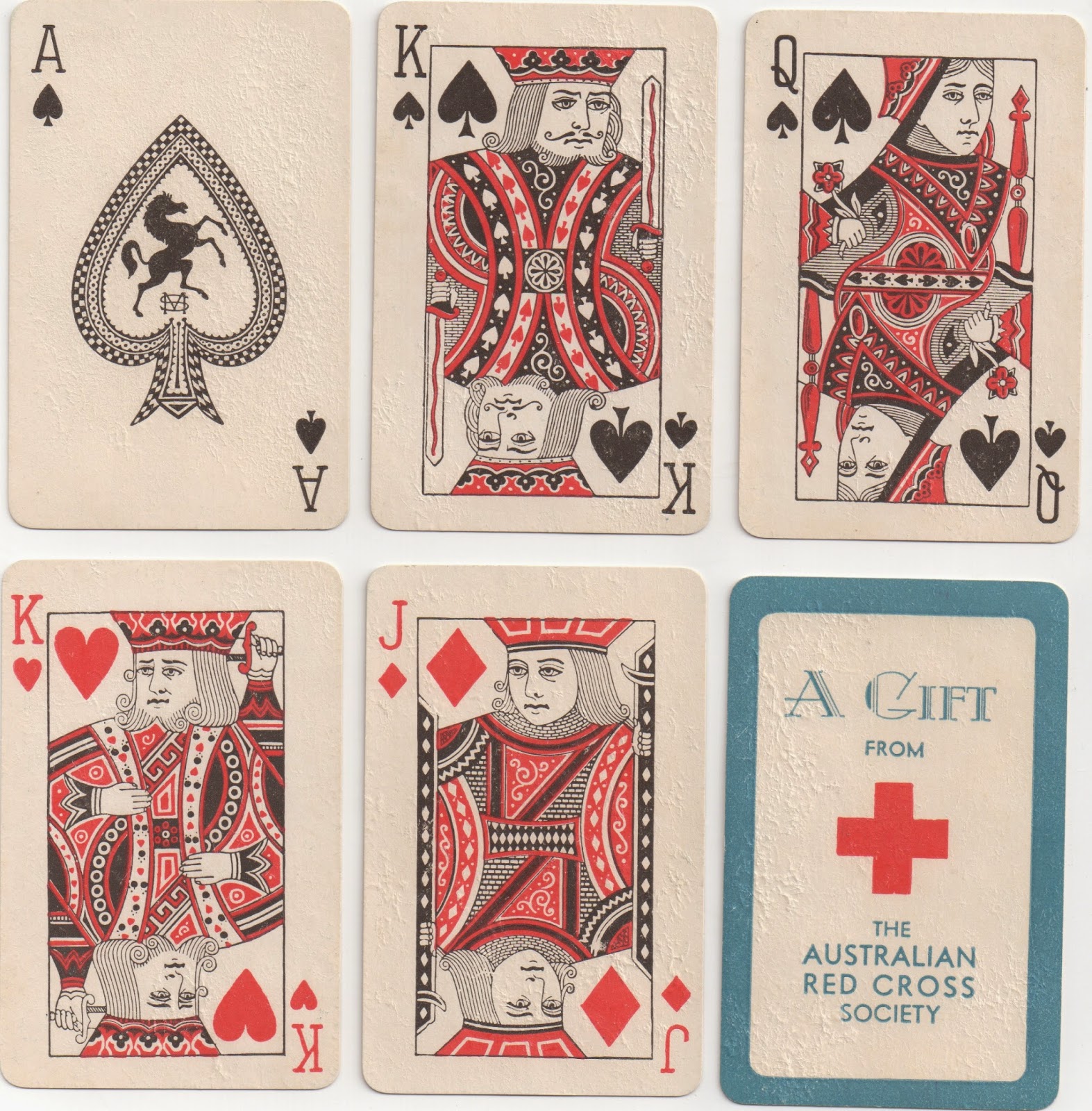 The original US2.1 courts are illustrated below. 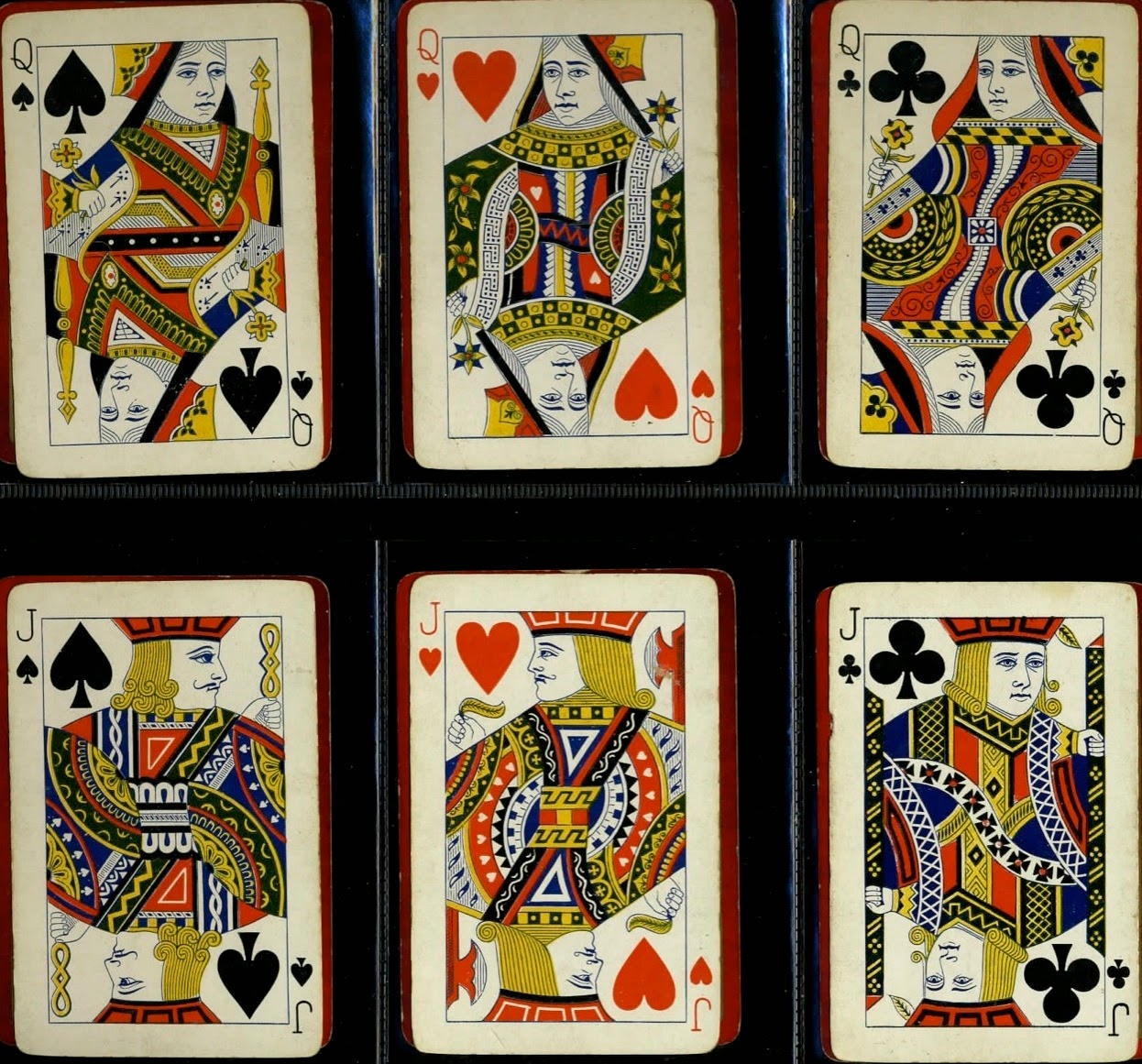 Another important maker is Hudson, who started up in the 1920s. Their court cards were modelled on US5, the design inherited by USPCC from the American Banknote Company. It has the distinctive features of a left-facing JS and a QH with her pip to the right rather than the usual left. 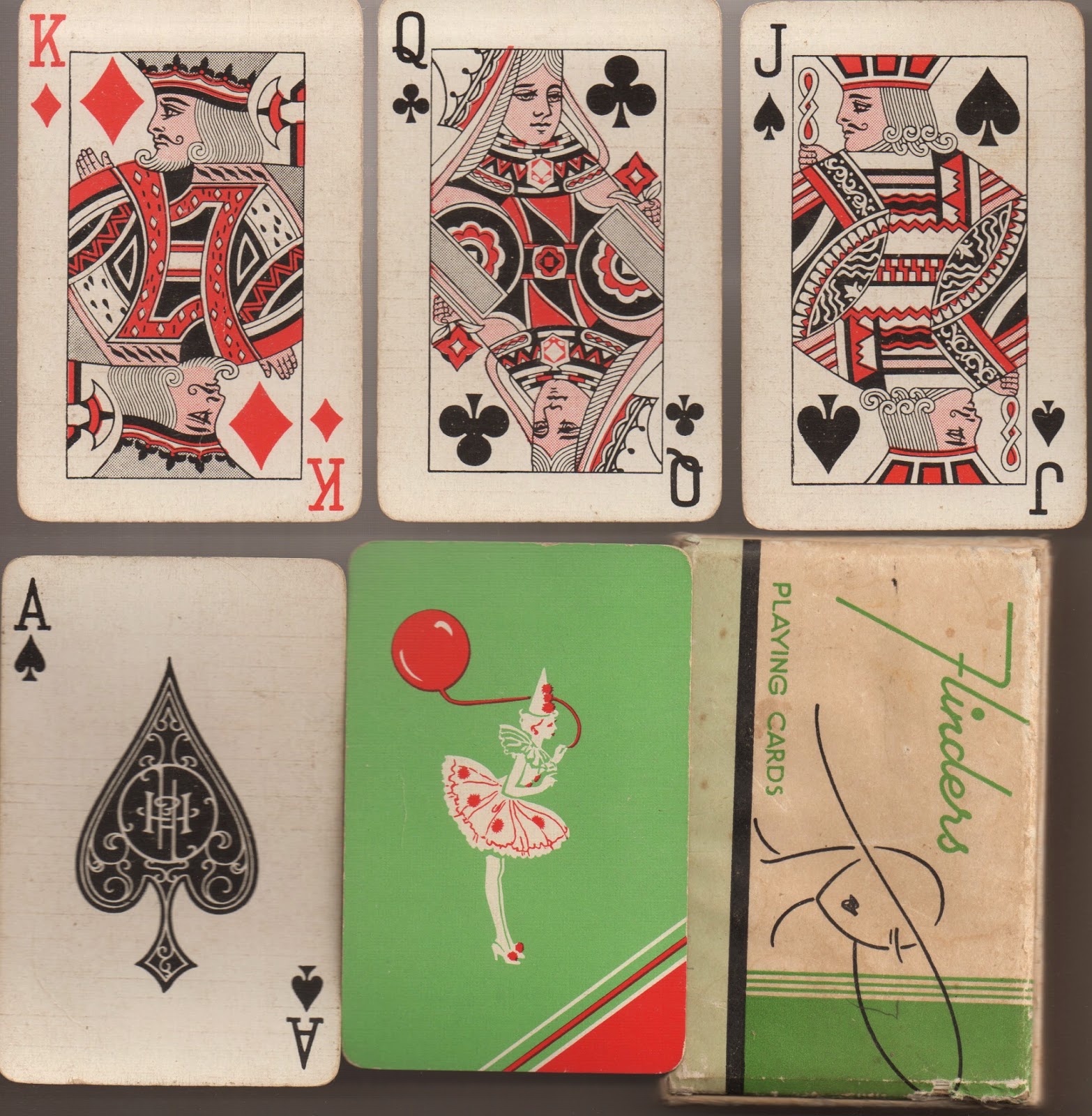 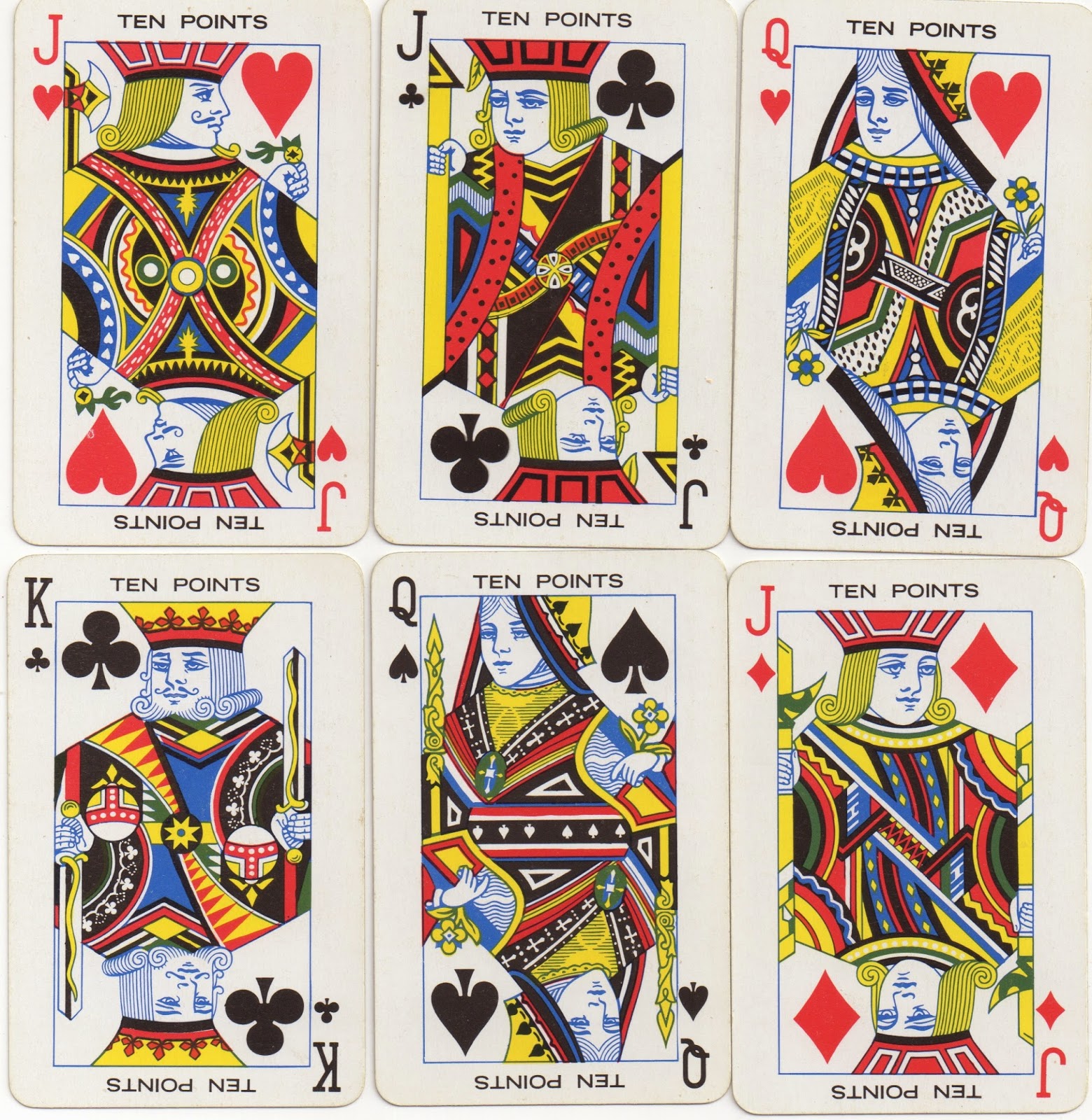 Above: 4-colour courts from a Valentine canasta pack, c.1975

This design was used throughout the life of the firm, passing to Valentine, when they took it over in 1972, and again to John Sands in the 1990s.

The other major card producer is Reed, originally Paper Products Ltd. They used a faithful copy of the USPCC bridge courts (US3.1), which ran from c.1930 right up to the present day in the Queen's Slipper packs in two colours only. 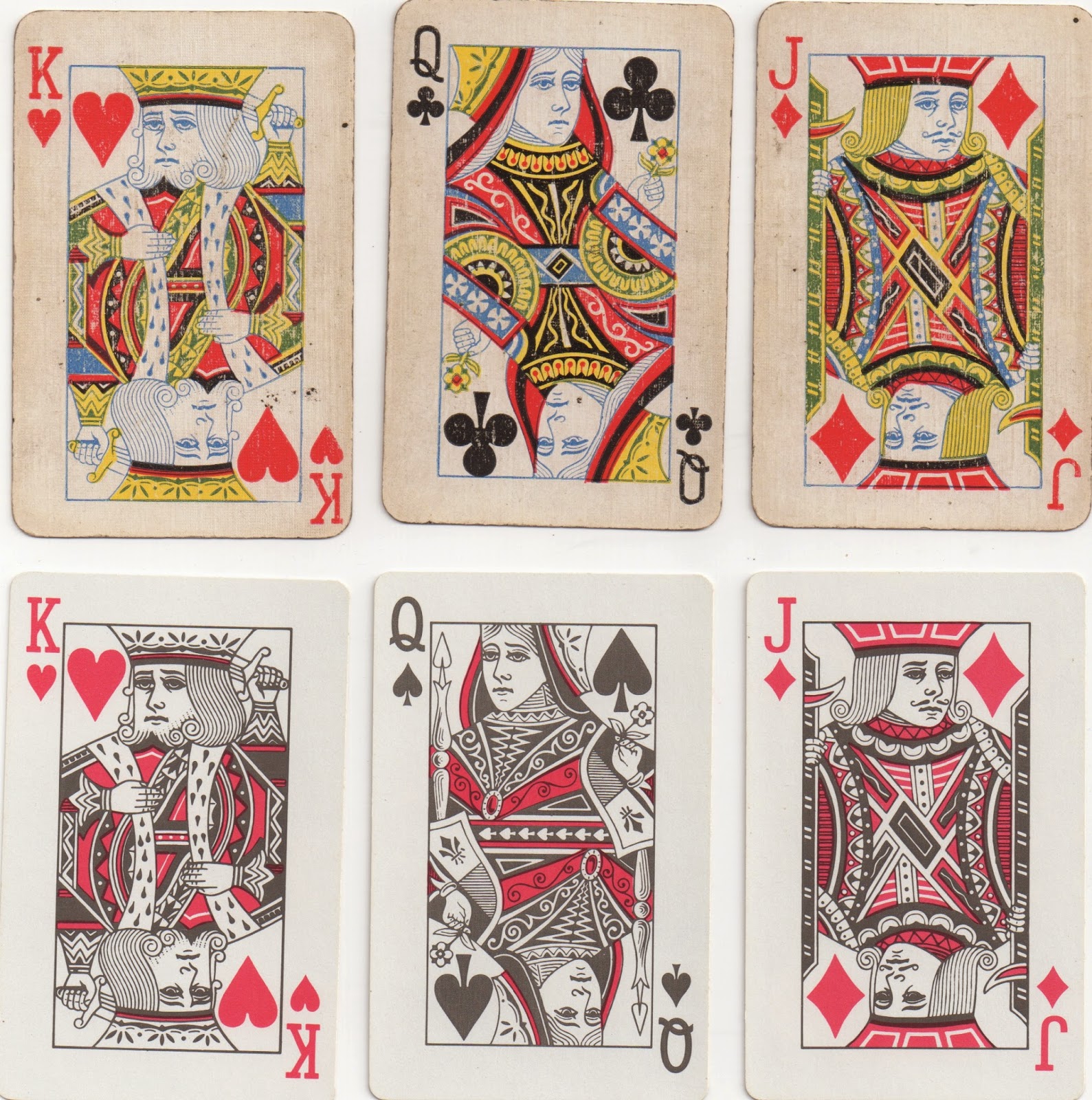 In an early patience pack, Southern Cross, the USPCC turned courts (US4) were used.

For some reason in 1982 a pack for the Brisbane Commonwealth Games used Piatnik courts and joker in two colours with Reed/Spicer number cards. Shortly after that the former Spicer & Detmold courts were redrawn and used in casino packs. 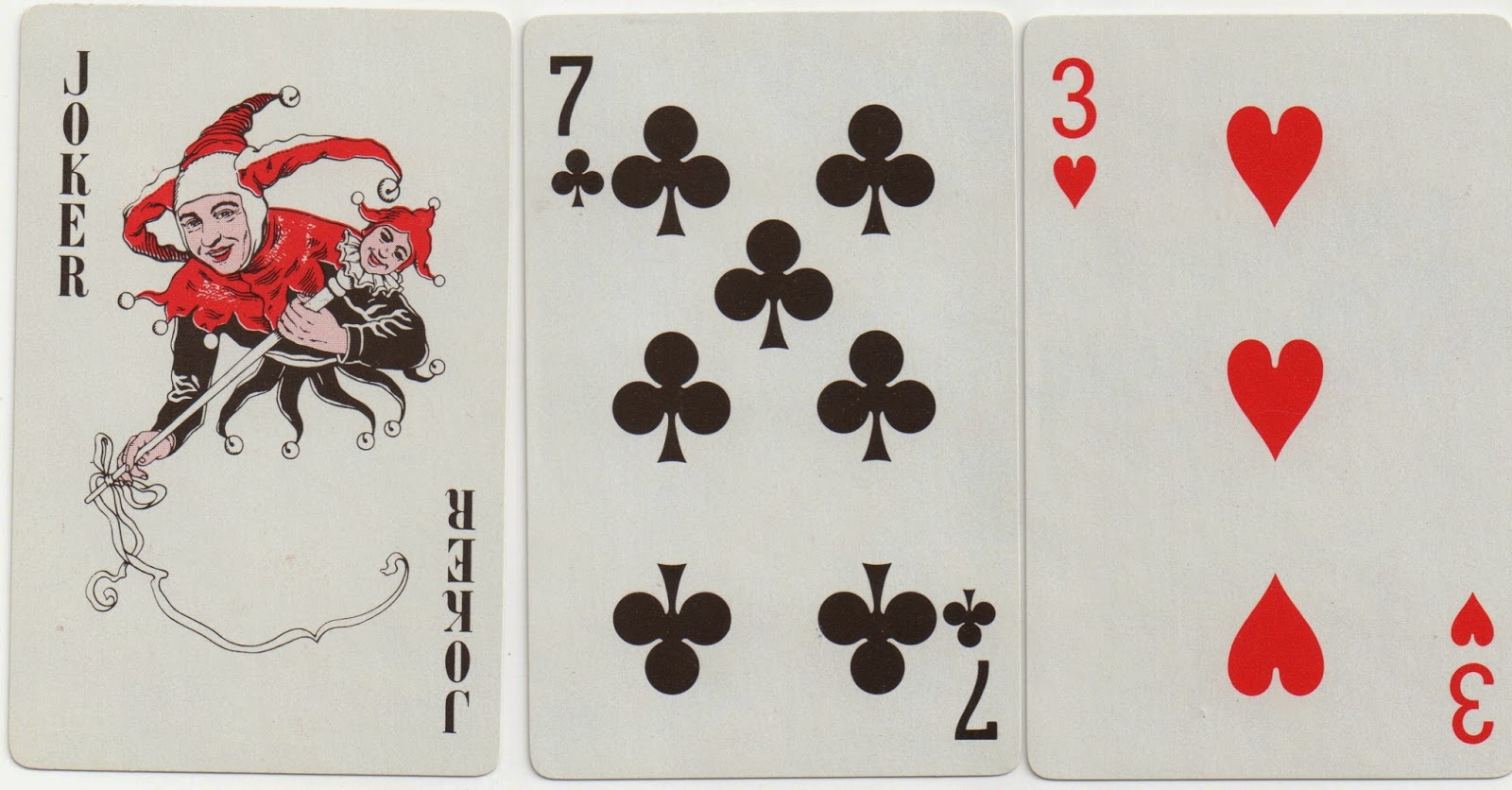 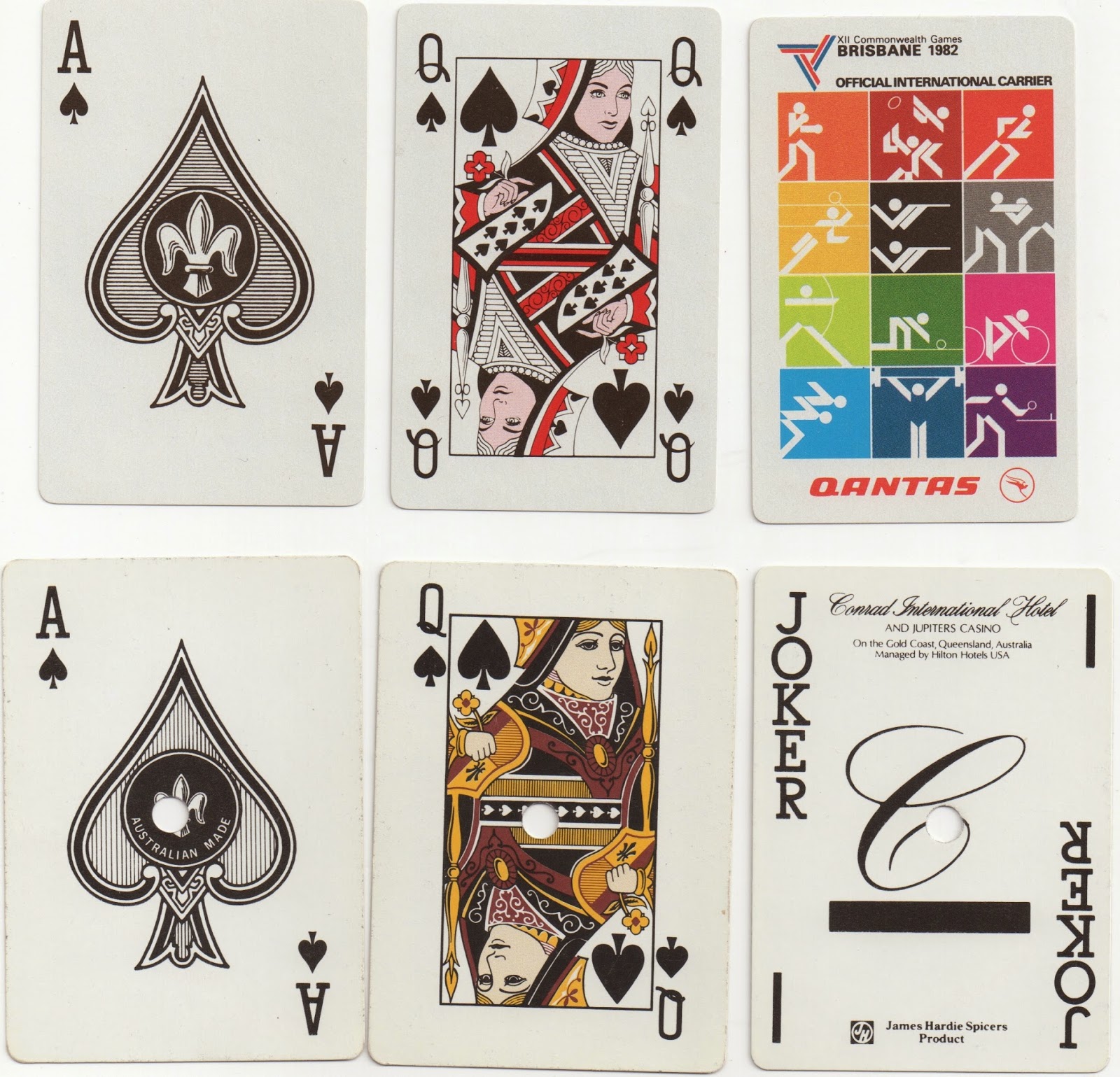 As regards idiosyncratic designs I know two only. One is anonymous and from c.1930. 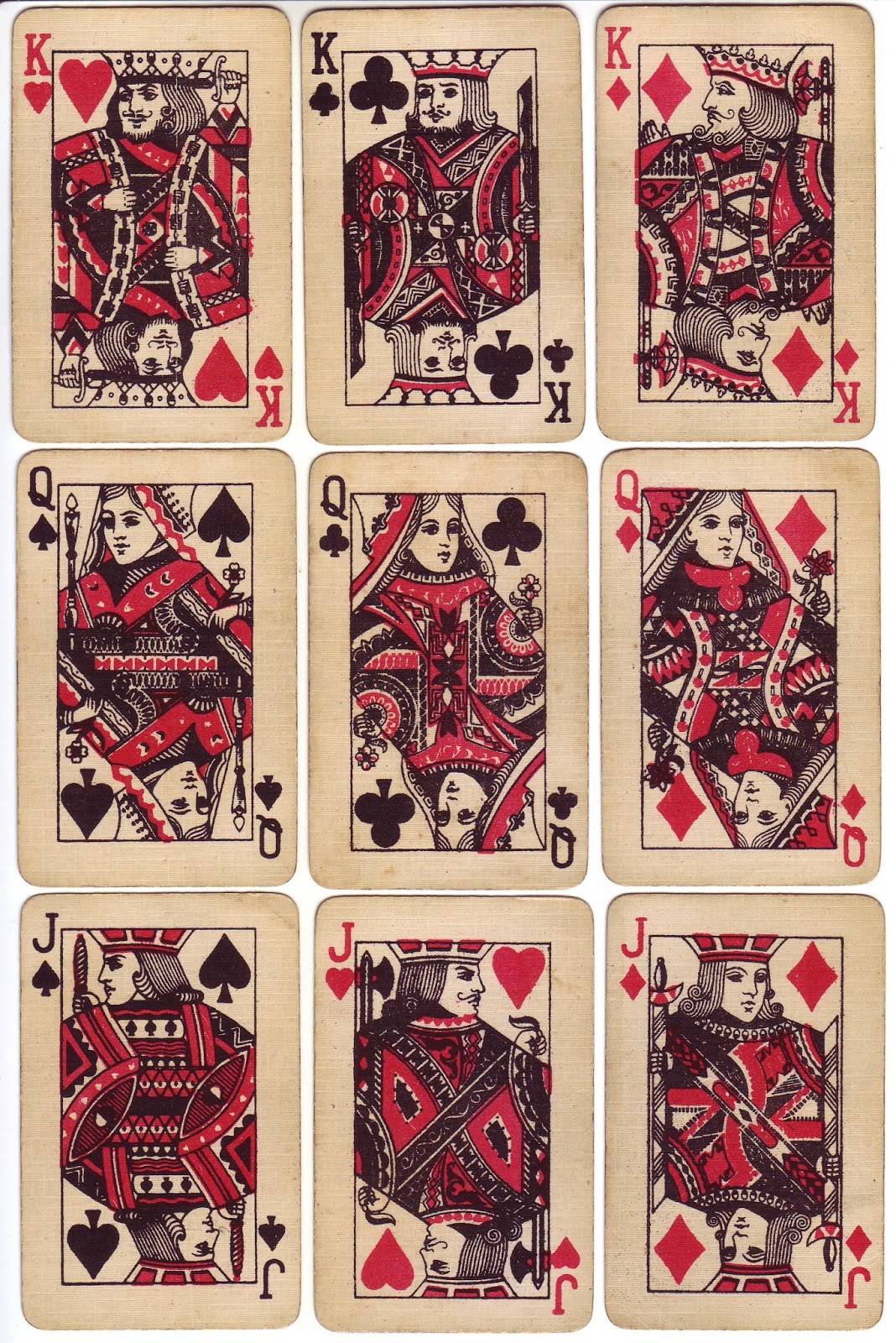 Above: Anonymous with some elements of Whitman's US5.1 courts. (Thanks to John Daniels for the scan.)

The other one is much more recent, produced by the Singapore-based SNP. Note the turned QH to put her suit-sign on the right in line with the other queens. 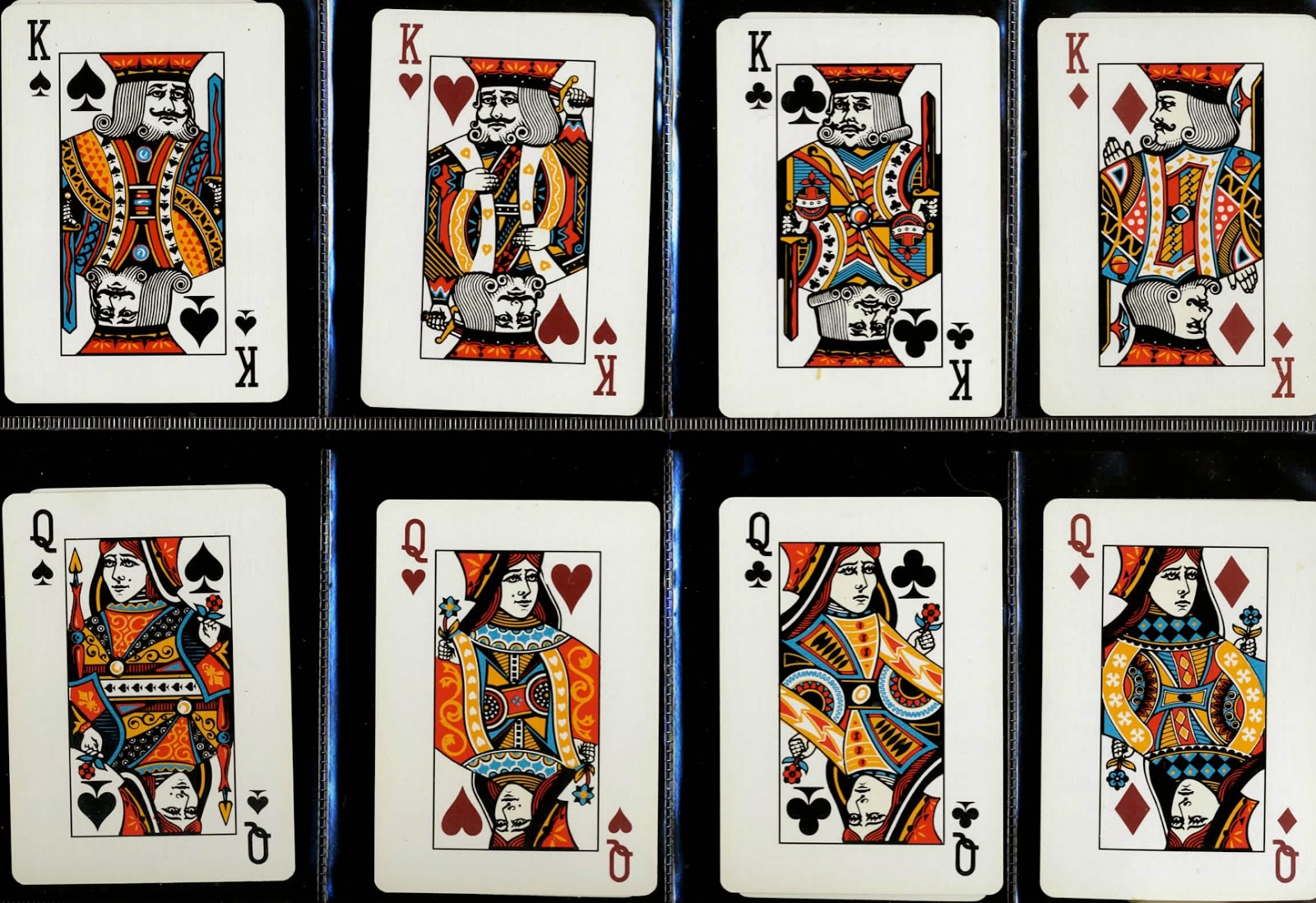 A book titled “On The Cards” or “A Motley Pack” by Garnet Walch (1843-1913) was published in Melbourne (Australia) and illustrated by George Gordon McCrae in 1875.

Hudson Industries Pty Ltd of Carlton in Victoria was first registered as a printing company in 1920. In the 1940s they registered their own distinctive ace of spades and joker.

Spicer & Detmold (1922-48) produced a lot of pictorial back designs. Most decks with picture backs were printed in 4 colours.

Excise Duty was introduced on Australian playing cards in 1932

Elevenses is a card game in which respectable 1920s socialites strive to serve the finest morning teas!

The vibrant colours and artwork glorify the symbolism, mood and positive energy in this exciting new tarot deck from Australia.

Artwork for The Watersprite Tarot© designed and painted by Alison McDonald.