A further selection of European standard patterns including various redrawings.

Here is a further selection of European standard patterns including various redrawings. The first page on this topic is 16. The variation of design within one pattern can be remarkable. This has been my focus with regard to the standard English pattern, but it applies to most other standard patterns as well.

The form of the Paris pattern was strictly regulated in France, so that hardly any variation can be found throughout the 19th century, except in small packs and in packs destined for export. The following are mostly not from France and are quite elaborate versions of the Paris pattern. The first two are French exceptions. 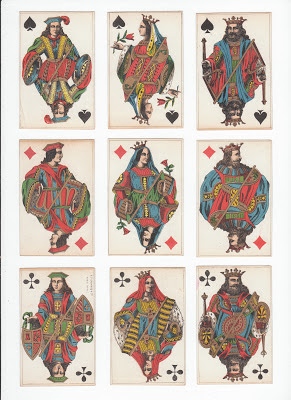 A decorative version with gold in a patience pack by Grimaud, late 19th century 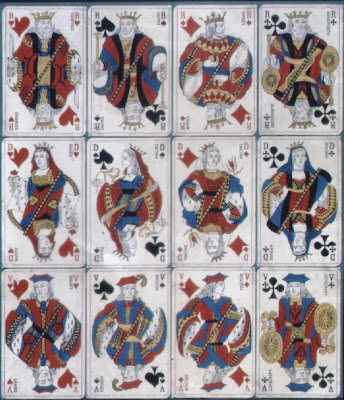 A slightly less conventional version by Willeb, c.1950 (sorry for the poor quality of the original slide) 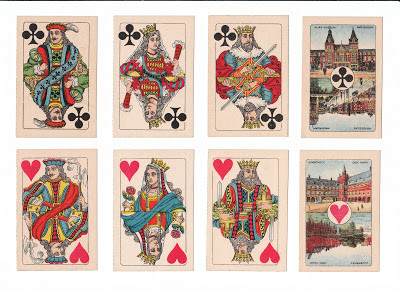 Another elaborate version with some features redrawn for the Dutch market, probably made in Belgium

The earlier version of the Paris pattern, as used in the 17th century, gave rise to a lot of local variants that have become standards in their own right. Here is a selection; local idiosyncrasies, such as which way the KD and JD face, abound. Other examples are illustrated on pages 11 and 16. 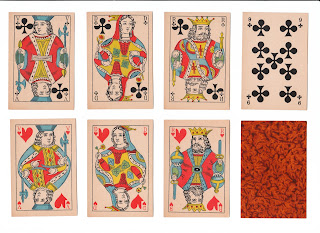 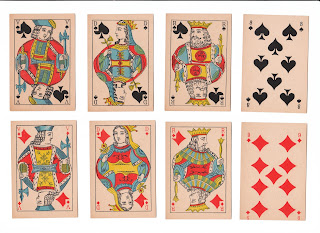 Cartes marbrées, so-called because of the back design (marbled), by a Turnhout maker, possibly Brepols 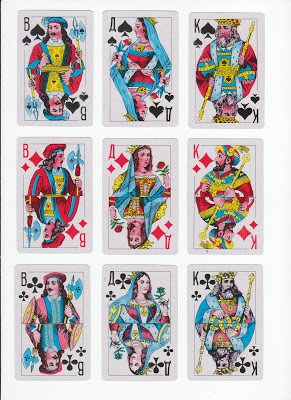 The Russian version of the pattern 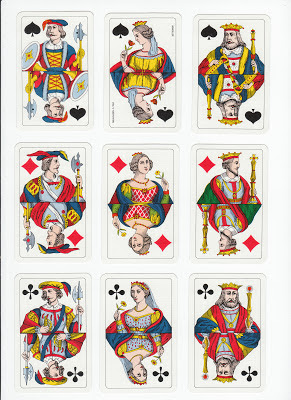 And the Swiss version by Müller; here the figures of the black jacks have been switched 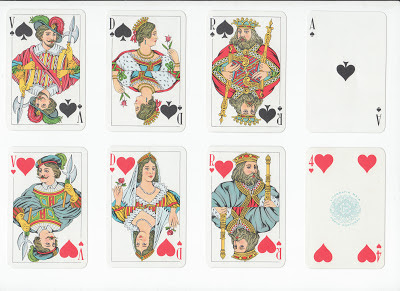 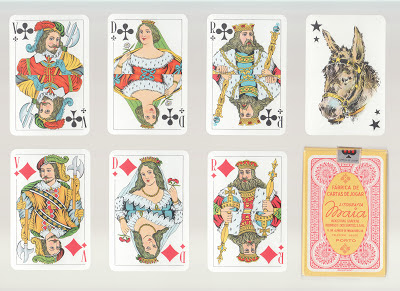 A number of European designs, most of which date to the latter part of the 19th century, have a semi-standard status in that they became established as more than a one-off non-standard design for a specific purpose. Bon Goût made in Belgium was one such: it bears a strong resemblance to the contemporary Paris-derived patterns, even though some of the figures are not in their traditional suits. For example, the KD holds a harp rather than the KS (originally representing David). 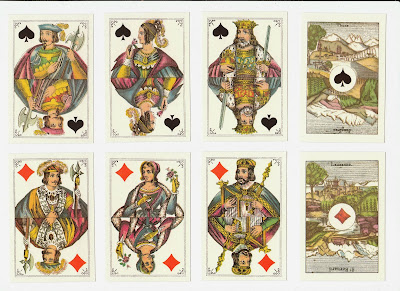 Another widely established and copied design is Dondorf's Rhineland pattern. As far as I can tell, this was an in-house design (I stand to be corrected by Dondorf collectors), but was used in several different packs of different grades and was copied by other makers. 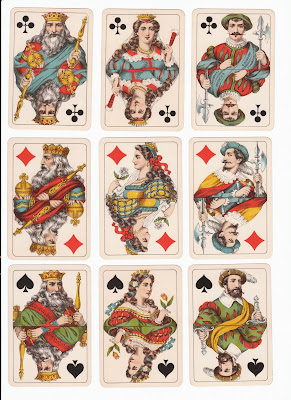 Dondorf's original design, here from a pack with scenes from the Napoleonic Wars on the aces 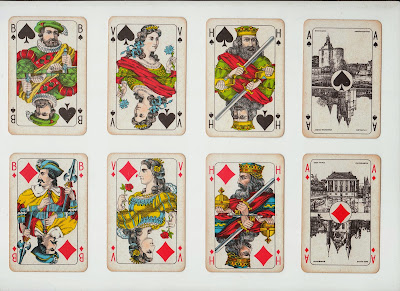 The pattern originally had the courts of each suit facing the same way, but Piatnik's version, which was available until very recently, has changed the head of the JD to three-quarters left. 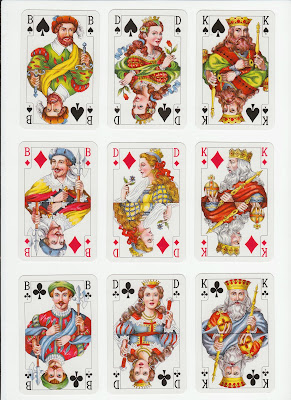 A good example of an invented standard is furnished by Öberg's standard Swedish pattern. From some time in the early 20th century it took over from the Scandinavian version of the Old Paris pattern, which had been used until then. 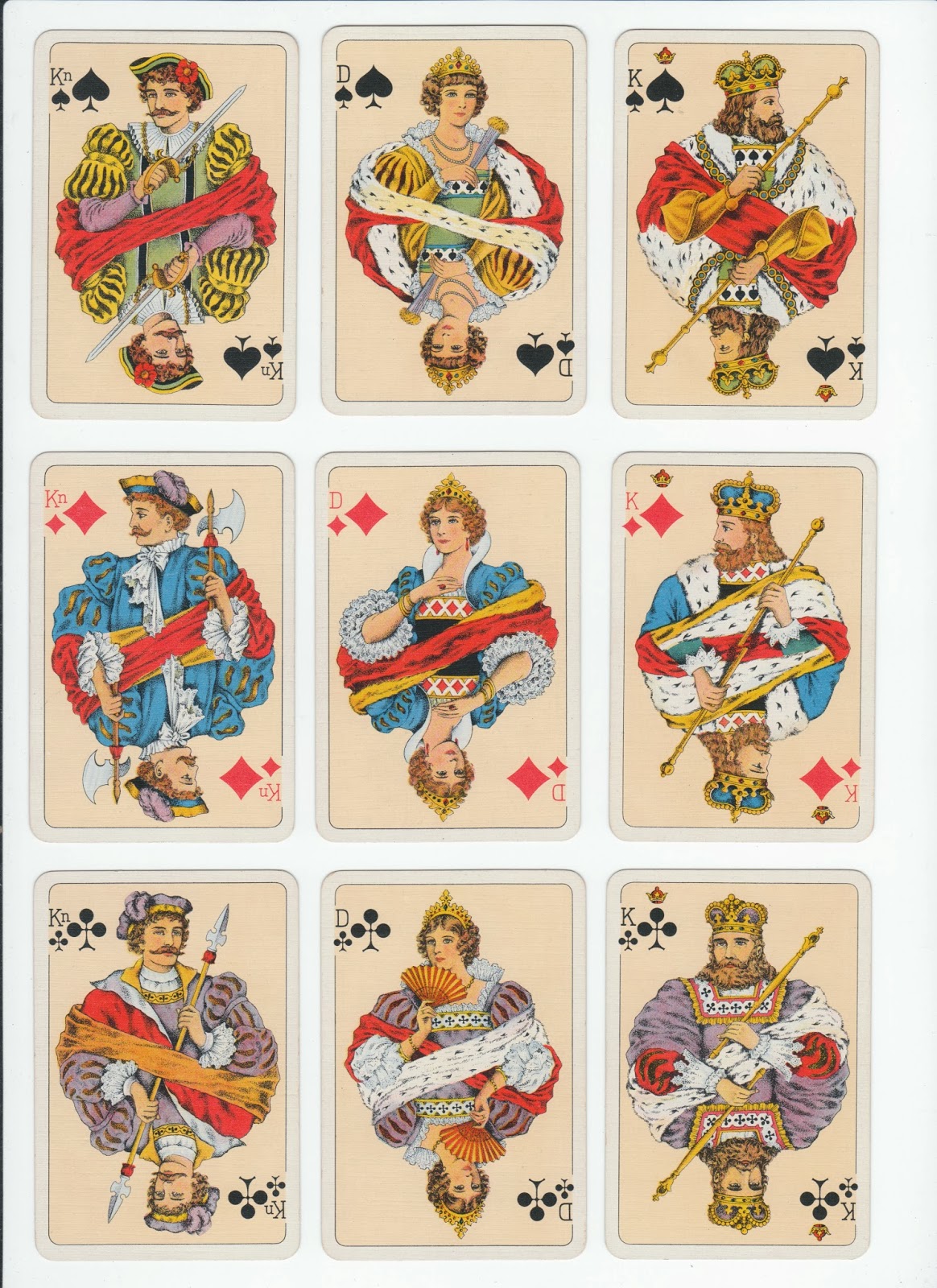 Piatnik has also produced a version; as with the Rhineland pattern a few changes have been made, so, for example, all the kings hold orbs. 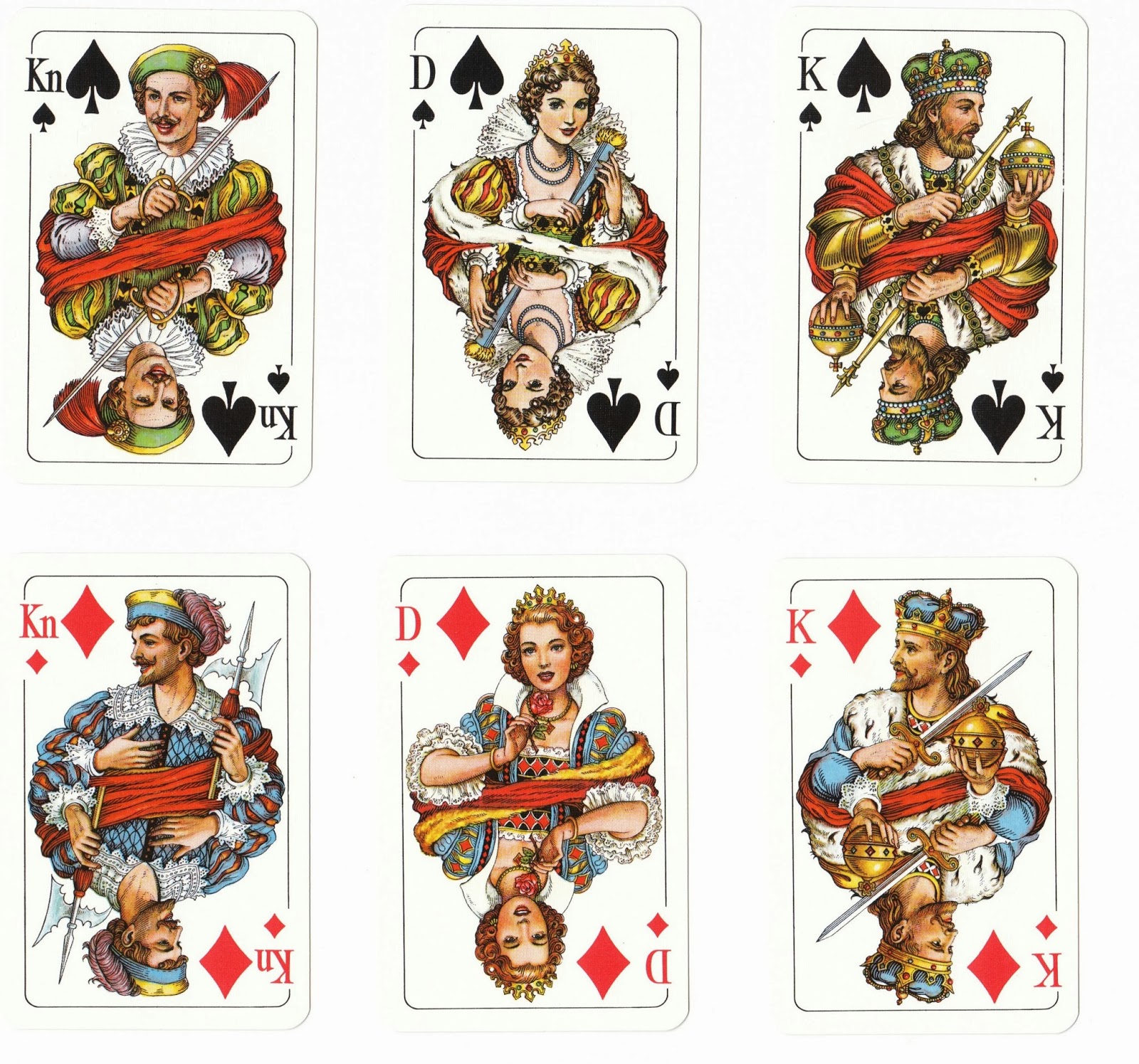 One of the regional French patterns has provided at least some of the figures of the Lombard or Milanese pattern, such as the bird-carrying king, the king with his sceptre over his shoulder and the profile jack. 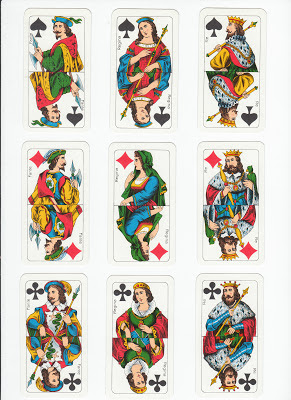 And finally, two more patterns which do not have French suit-signs. 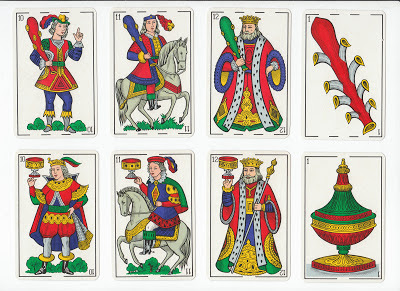 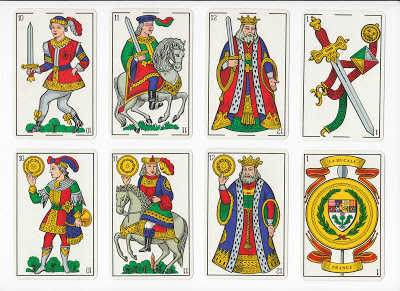 The Catalan pattern by La Ducale of France 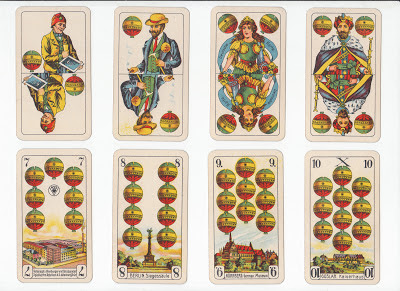 The suits of leaves and bells from the Prussian pattern by ASS; the female figure is on the two (Daus) of the suits