A Concise History of Playing-cards

Playing Cards are believed to have originated in China and then spread to India and Persia. From Persia they are believed to have spread to Egypt during the era of Mamluk control, and from there into Europe through both the Italian and Iberian peninsulas during the second half of the 14th century. Thus, European playing cards appear to have an Islamic derivation. Some of the earliest surviving packs were hand painted works of art which were expensive and affordable only by wealthy patrons such as dukes or emperors.

But you can play card games with any old pack so as demand increased new, cheaper methods of production were discovered so that playing cards became available for everyone... 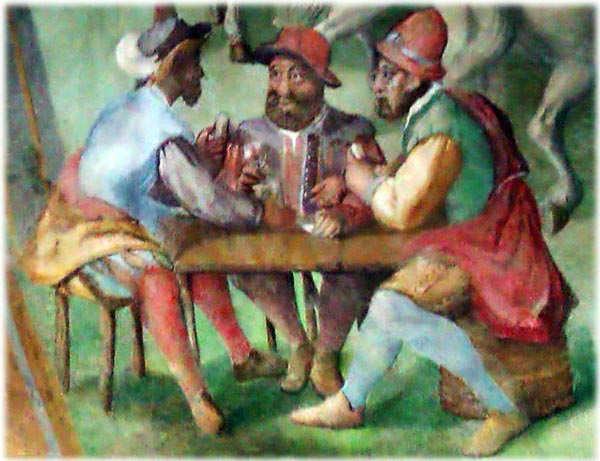 At the end there will be a quiz to consolidate your knowledge. 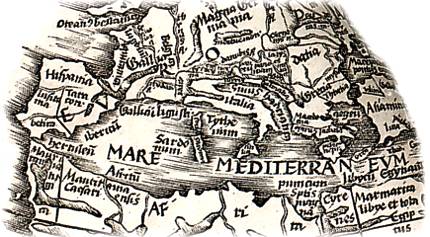 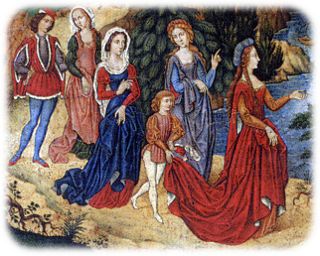 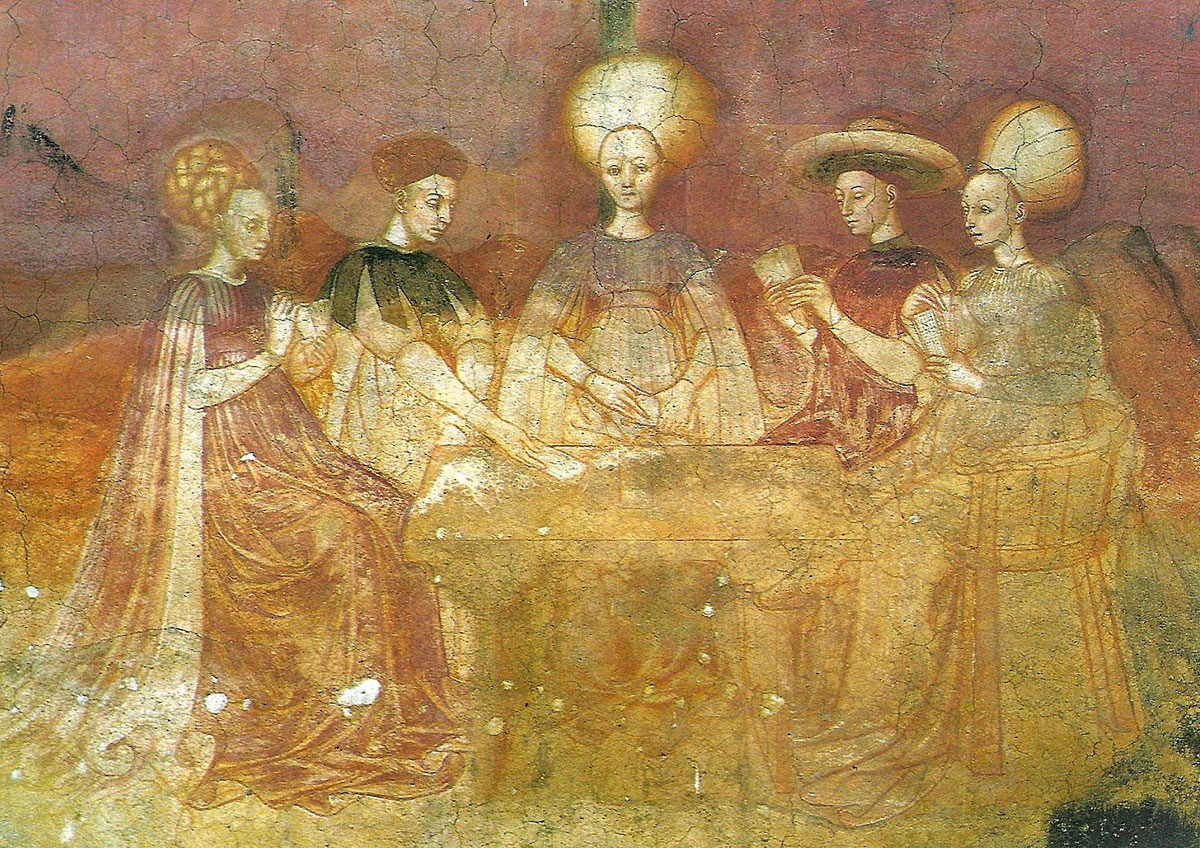 Above: the Tarocchi Players of Casa Borromeo, Milan 15th C. 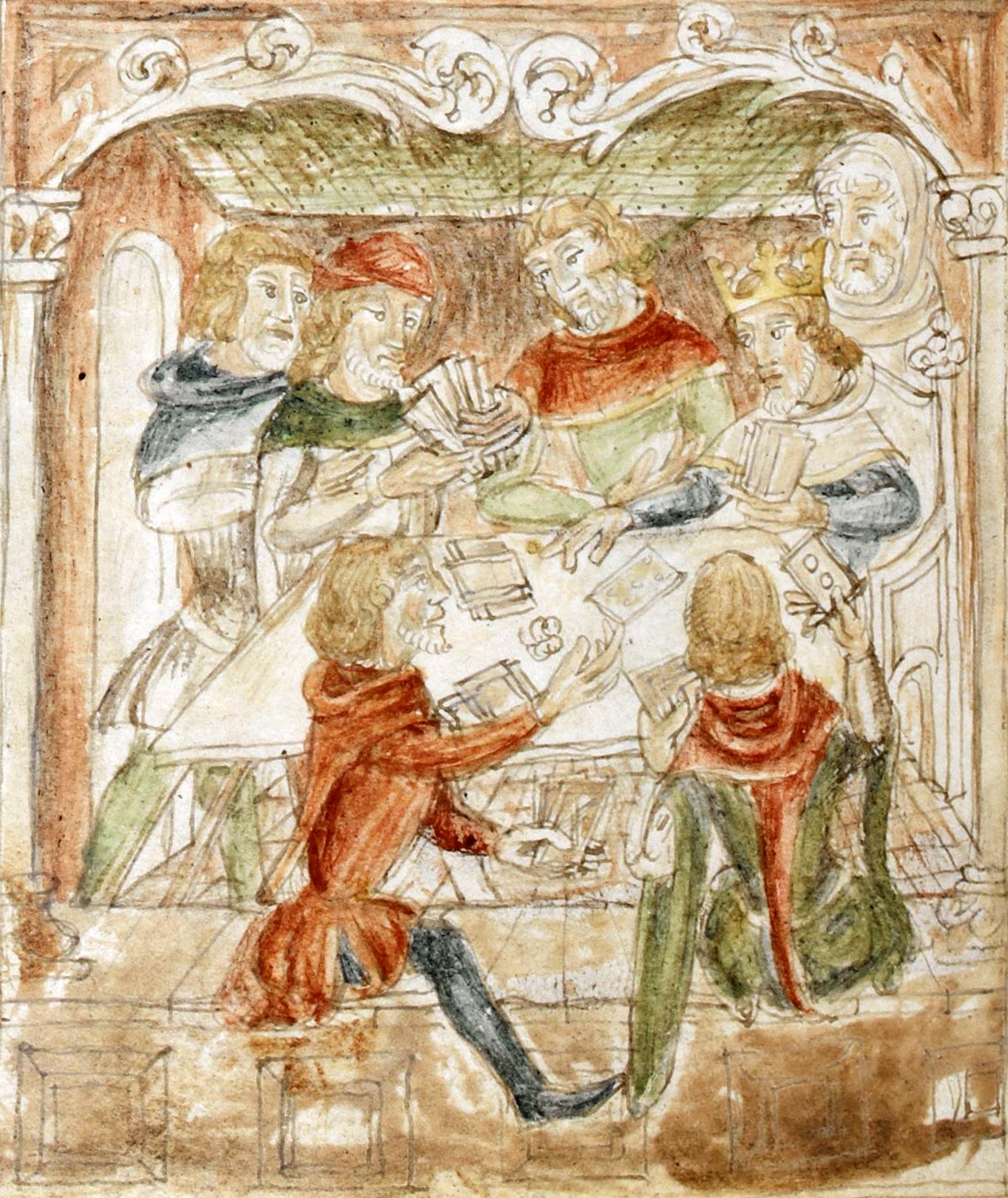 Above: British Library manuscript Add MS 12228, date 1352-1362. This is the earliest known depiction of card play, a miniature in a 14th-century manuscript of Meliadus or Guiron le Courtois (part of the romance also known as Palamedes; also known as Le Roman du Roy Meliadus de Lennoys), by Hélie de Boron. The manuscript was written with areas left blank for bas-de-page miniatures, like this one, to be added. Hundreds were added to this manuscript, at various times and by various artists, this one probably late 14th century. The present image shows King Meliadus and his followers amusing themselves while in captivity. Players are shown holding square-cornered cards fanned in their hands, hidden from view, and playing cards onto the table. They are playing a 4-handed trick-taking game, following suit, and piling tricks cross-wise for ease of counting. The deck uses the Latin suit-signs (coins and staves are shown), and the game is being played for money or counters, shown on the table. Card playing is not mentioned in the text but there is mention of the imprisoned men entertaining themselves. Apparently the artist simply imagined the scene as involving the newly introduced and highly portable game of cards. Source: British Library Add MS 12228►

Pratesi, Franco: on the history of playing cards and card games,  Online here►